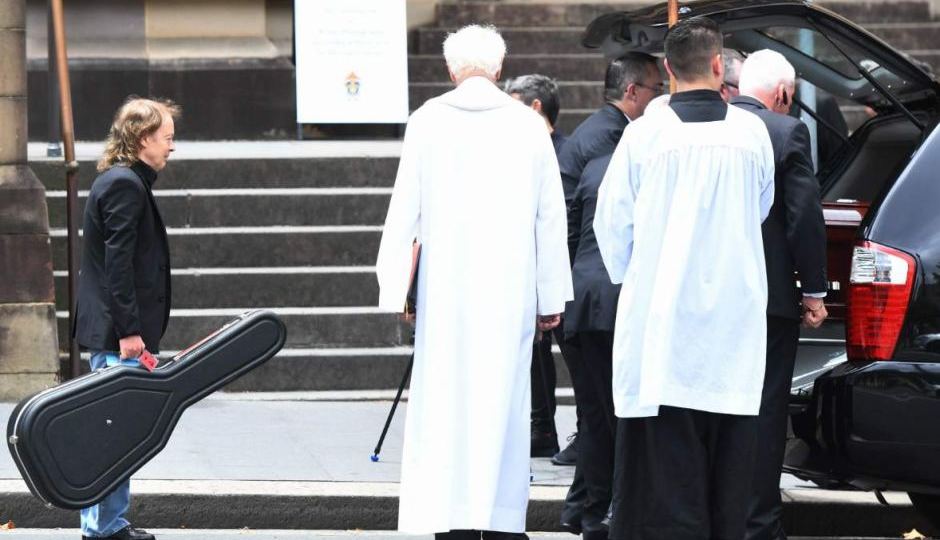 Angus Young carries a guitar to his brother's hearse after the service. Photo: AAP

Far removed from the loud, sweaty stages and stadiums of his greatest performances, AC/DC guitarist and songwriter Malcolm Young was farewelled with hymns in a house of God.

The 64-year-old died earlier this month after suffering dementia and a period of ill health over several years.

Family including younger brother Angus Young and some of the biggest names in Australian rock such as Jimmy Barnes, Angry Anderson and promoter Michael Chugg were at Tuesday’s service at St Mary’s Cathedral in Sydney.

His beloved Gretsch guitar nicknamed “The Beast” rested on top of his coffin during the service, and many fans also attended to pay tribute.

After the service, Angus carried the guitar out to the hearse as his brother’s coffin was loaded inside.

Young was remembered as both a legendary guitarist, and humble friend.

Friend Bradley Horsburgh said Young could not be further from the rock star stereotype.

“He loved spending time with his wife and family,” he said.

“Malcolm has left us all too soon but the spark of his talent … will live on forever.”

Members from Young’s family did not speak publicly during the service but in a statement in the program they thanked mourners for their support.

“Malcom’s family thank you for your love, support and overwhelming outpouring of kindness during this time.

“They ask that you remember Malcolm as a man who was generous and had immense talent.

“His enormous legacy to his family and the music industry worldwide will never be forgotten.”

The cathedral choir sung Amazing Grace, The Lord is My Shepherd and Jerusalem.

After the service the cortege made its way down College Street led by the Scots College Pipes and Drums band, which played a medley of songs including the guitar solo from Long Way to the Top and Waltzing Matilda.

It has been another blow to the extended Young family, after the death of older brother George who co-founded the Easybeats last month.

The service was followed by a private family burial.

Young is survived by his wife O’Linda, two children and three grandchildren.