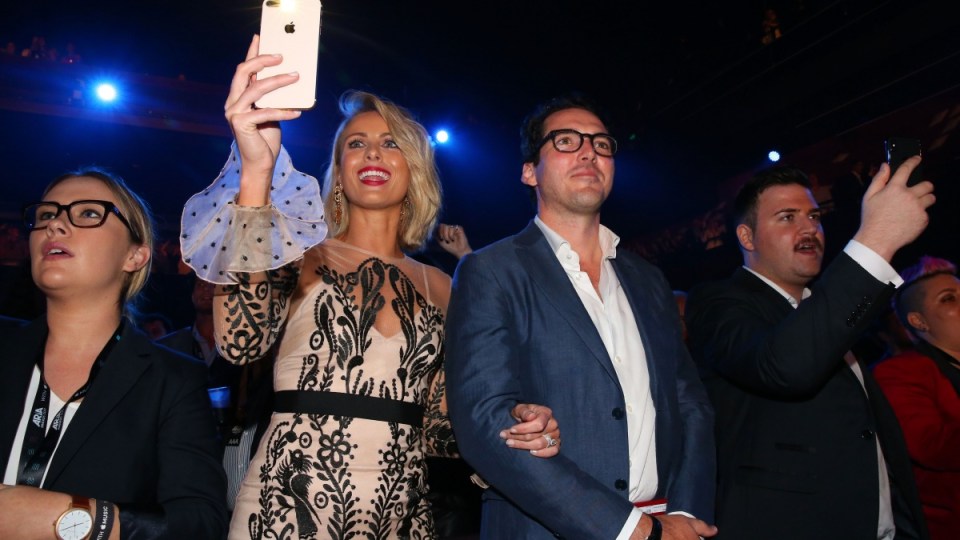 This year’s ARIAs will be remembered thanks to a slew of seriously impressive performances from Australian artists – all presided over by Richard Wilkins’ eerily disembodied voice.

But rather than make use of Wilkins’ recognisable face and stage presence, organisers relegated him somewhere off-stage, allowing only his voice to boom over the speakers – an approach that left viewers at home feeling confused and a little creeped out.

“Look I get it if they couldn’t find a host but they can’t do better than Richard Wilkins voice? Really?” one bemused Twitter user opined, his thoughts echoed by most on social media.

“Can someone tell me where the f––k Richard Wilkins is?” another added.

Honestly the only bad thing about this year’s #ARIAs is how creepy the disembodied voice of @RichardWilkins is. Everything else is top notch.

Richard Wilkins doing voiceovers, and uttering the phrase “give it up for..” has already ruined the #arias for me

Richard Wilkins voice over is going to drive me insane all night. #ARIAs

Others were more concerned with what they deemed Wilkins’ emotionless delivery.

“Hearing Richard Wilkins talk about [rap duo] AB Original is like a disinterested guide taking a bunch of tourists through a museum,” said one viewer.

“Had Richard Wilkins heard of any of these bands before tonight?” another queried.

But it wasn’t all criticism for the experienced host, who faced the difficult challenge of conveying emotion and enthusiasm without any facial expressions.

“[Wilkins’] voice is iconically Australian and the flow of the show is all very natural thanks to his talent,” one Twitter user said.

Others felt it was at least an improvement on last year’s efforts, with one person contending: “After The Veronicas’ dreadful hosting last year … I can understand why they just went with Richard Wilkins disembodied voice this year.”

It didn’t help matters that poor Wilkins was required to spruik the Awards’ official partner, Apple Music, at every opportunity, leaving the whole ceremony feeling like one big ad for the tech giant.

#ARIAS just one big ad for Apple Music at this point.

But while the hosting performance received mixed reviews, there was little doubt as to the quality of the musical performances.

ARIA Hall of Fame entrant Daryl Braithwaite, wearing a bright blue satin shirt, brought the house down with an energetic performance of his cult hit Horses.

The 68-year-old Braithwaite gave an impassioned, heartfelt speech accepting his Hall of Fame honour before joining Guy Sebastian and singer Celia Pavey on stage for a ripping rendition of the track that’s kept him touring pubs for decades.

“For all the people who continue coming to the live gigs and making it special, thank you,” Braithwaite said.

“If you are a young person looking to play music and you have the passion, please listen to the voice inside your head and take the chance on it, because it is really worth it. Thank you all very much.”

International stars Lorde and Harry Styles also impressed with their live singing chops, but it was music industry stalwart Paul Kelly’s performance with Dan Sultan, ABOriginal and Dhungala Children’s Choir that impressed the crowd and those watching at home.

AB Original, an indigenous hip hop duo made up of rappers Briggs and Trials, remixed Kelly’s Dumb Things, repurposing its lyrics to refer to Australia’s racism problem, as well as the battle for indigenous rights and Australia’s refugee policy.

Newcomer Amy Shark cleaned up on behalf of the female nominees, winning Best Pop Release and Breakout Artist before taking to the stage to perform her hit Adore.

Meanwhile, Album of the Year honour went to Sydney band Gang of Youths, with lead singer Dave Le’aupepe using the opportunity to address Australia’s immigrant base.

“This country is built on a strong indigenous people and on the backs of immigrants. We are Pacific islanders and proud of our heritage. We are a strong people and a proud people and we are a loving community, and we are not just, you know, useful on the footy field,” he joked.

But after all that, it took Jimmy Barnes closing out the show with a killer tribute to AC/DC’s Malcolm and George Young to finally pull the omnipresent Wilkins out from wherever he had been hiding.