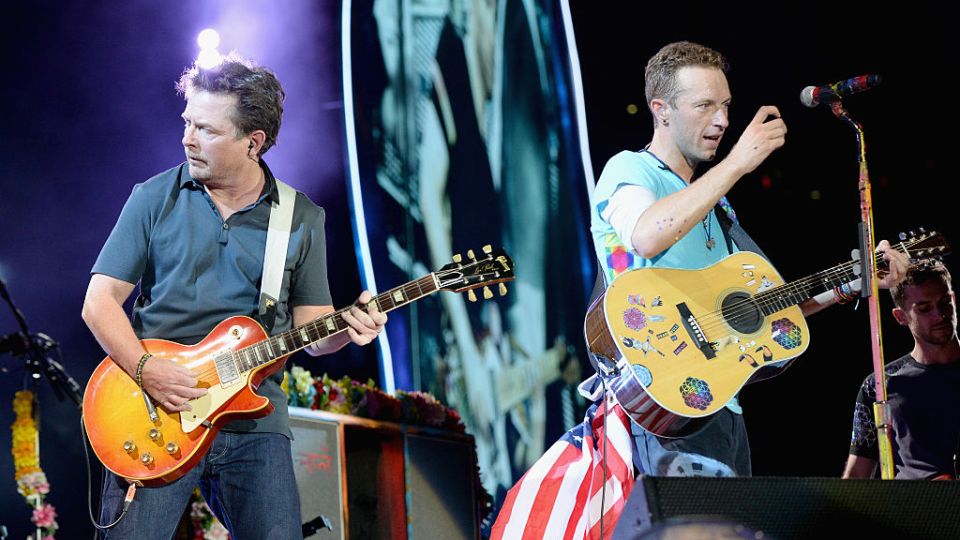 Michael J Fox has reprised one of the iconic scenes from the film Back to the Future with the help of British band Coldplay.

Coldplay took a video request from singer Chris Martin’s son to play “a song from both of our favourite movie” at the MetLife Stadium in New Jersey on Sunday.

They launched into the 1954 hit, Earth Angel, by the Penguins, which was played in the 1985 movie by fictional band Marvin Berry and the Starlighters at a school dance in 1955.

Halfway through the song, Martin called Fox, 55, on stage to play guitar.

In the movie, Fox’s character Marty McFly steps in to play after the Starlighter’s guitarist injures his hand ahead of their performance.

After Earth Angel, Martin asked the audience if “anyone would like us to do one more song?” before launching into Chuck Berry’s 1958 hit Johnny B Goode, which McFly sang — three years before it was released — after Marvin Berry invited him to take the microphone.

Although Fox mimed both the playing and singing in the movie, this is not the first time he has played for real in front of cameras.

His annual Michael J Fox Foundation fundraiser, raising money for Parkinson’s disease research, has given him the opportunity to perform with Joan Jett and the Who, as well as demonstrate his command of Johnny B Goode.

Fox, who was diagnosed with Parkinson’s disease in 1991, has managed his condition with medication and a surgical procedure to reduce tremors.

Michael J Fox goes Back to the Future with Coldplay