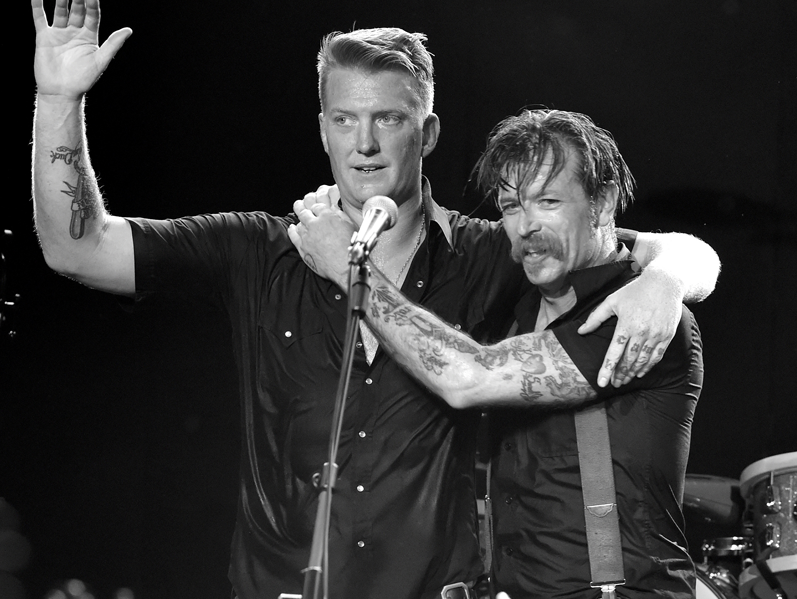 The Eagles of Death Metal (EODM) are a damn fine rock and roll band, albeit a horribly unlucky one.

For some sickening reason, militants chose to storm into their show at the Bataclan theatre in Paris on November 13, killing 89 people.

It’s tragically ironic that a group which aims to be above all fun, debaucherous and irreverent would be torn down by such a dark and heinous act of violence.

That’s not to say they aren’t a serious band – you bet they’re a serious band, one in the absolute prime of their career – but with cheeky album names like Heart On and songs titles like I’m Your Torpedo, humour is their trademark.

Now, all future EODM shows have been cancelled until further notice.

But one wonders whether this band could ever play again given what they saw at the Bataclan.

For musicians and fans alike, performing and watching live shows is music’s pinnacle.

Friday the 13th in Paris should have been a celebration for the fans who had waited seven years for a new album to be released.

Instead, it was a bloodbath.

‘People died because they wouldn’t leave their friends’

Speaking for the first time since the attacks, EODM singer Jesse Hughes and co-founder Josh Homme told VICE about the massacre, and of the several people who took refuge in the band’s dressing room.

“The killers were able to get in and kill every one of them, except for a kid who was hiding under my leather jacket,” Mr Hughes said in a sample of the interview, which will air in full next week.

“People were playing dead, and they were so scared.

One of those killed was EODM merchandise manager Nick Alexander.

Kiss of the Devil

According to concert library setlist.fm, the band was halfway through the song Kiss the Devil when the atrocities began.

While those lyrics sounded foreboding and even morose given what occurred, EODM are anything but.

Their music is a manic mix of rockabilly, desert rock and garage rock – all with a healthy dose of irony. Their schtick is to play on the way rock bands, in particular heavier death metals ones, can take themselves very seriously.

Whichever way you might take that tongue-in-cheek approach, the result is simply awesome music.

Picture yourself wearing cuban heels and a leather or denim jacket, and that might help you better imagine – or enjoy – EODM’s music.

While the media scrambled to make sense of what happened in Paris that Friday night, many outlets reported EODM were a death metal band.

With such an explicit name, song titles so blatant (Stuck in the Metal) and a heavy rock and roll look, you can understand how the media might have been fooled.

Ironically, that’s the kind of fun and misunderstood humour EODM have traded off since they formed in 1998.

Even in the most tragic of circumstances their cheeky ruse endured, such is its brilliance.

The men behind the band

Hughes is the only permanent touring member of the band, with a host of musicians having joined the line-up since 1998.

Homme, who is better know as the lead singer of Queens of the Stone Age, very rarely tours with the band, meaning he was fortunately not inside the Bataclan.

He is a living rock and roll god in America and around the world, lauded for his unashamed commitment to old school rock even at a time when music is getting more electronic.

(Click the owl to see the band’s current line-up  )

Homme and Hughes went to high school together in the quasi-metropolis Californian city of Palm Springs.

Hughes credits Homme as one of his closest friends and has said Homme saved his life during a struggle with drug addiction.

The band’s name also spawned out of the pair’s clear affinity, thanks to a throwaway line while they were hanging out.

In a 2009 interview Hughes revealed the name was thought up when the pair were in a bar watching a man dance to power ballad Winds of Change by Scorpions.

The man was asked what he was doing, to which he yelled: “This is death metal, dude!”.

Homme replied: “No it’s not. This is like the eagles of death metal.”