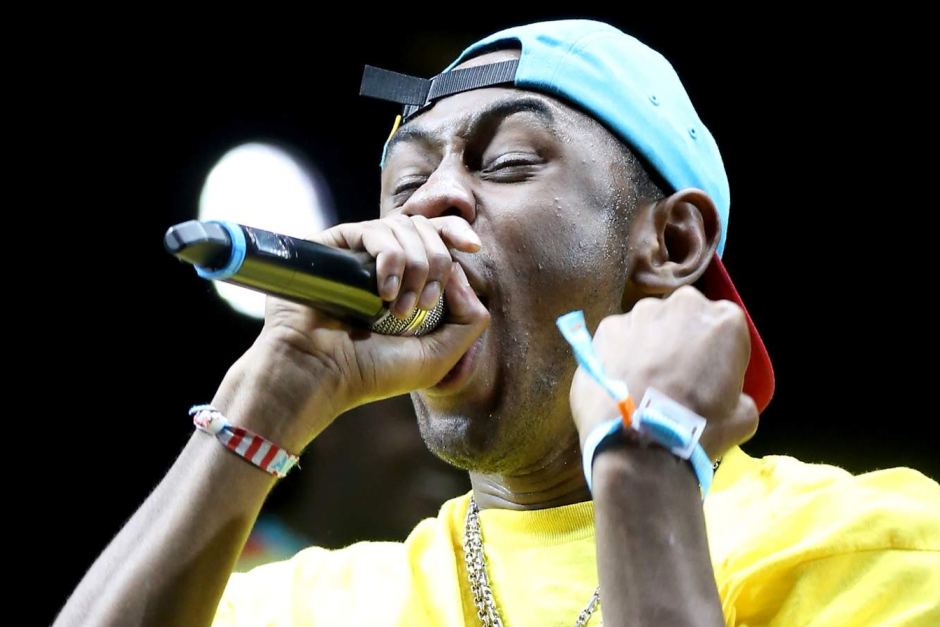 American rapper Tyler, The Creator has released a new track that takes aim at Australia’s immigration laws, two months after his Down Under tour was cancelled amid a storm of controversy.

The surprise new song, titled F**k It, sees the 24-year-old rapper taking aim at haters in a spitfire of rhymes, including a reference to Australia’s visa and quarantine polices.

“Tell Australia I’m sneaking in with a mic in my damn hand / Instead of the vegetables that I packed in my backpack,” he raps.

• Aussie band barred from US gig for ‘offensive’ name
• New York Comic Con: the best cosplay costumes
• This is the most sickening movie in cinemas

The track also suggests there were racist undertones as to why Tyler faced trouble applying for an Australian visa.

The rapper’s tour was cancelled amid claims his music promotes violence against women and an online campaign urging the Government to bar him from the country.

The Odd Future ringleader questions why the similarly controversial Eminem was granted Australian entry in the past given his misogynistic and violent lyrics.

“When Marshall [Eminem] had this problem what the f**k was they telling him? Is it cause of status or his melanin lacks black,” he spits over the acerbic backing track before adding: “I think people love to be mad.”

The song also addresses Tyler’s recent ban from the UK “for three to five years” based on song lyrics he wrote in 2009.

“Freedom of speech? My freedom was breached / Border patrol put me on streets immediately / For shit I said when I was a virgin,” he raps.

Tyler alleged he was “treated like a terrorist” by UK Border Patrol when they declared his music “encourages violence and intolerance of homosexuality”.

While it seemed Tyler would not make his way to Australia any time soon, his Odd Future associates, The Internet, will tour Australia as part of Laneway festival next February.

However, they were keen to distance themselves from the rap collective.

“Odd Future has a certain stigma to it that wasn’t conducive to our goals,” The Internet’s Syd Tha Kyd explained to triple j recently.

“With the kind of music that we make, it’s a little bit more accessible to children and parents and grandparents.

“And with the Odd Future name behind us – a lot of people who could be really big fans – it was turning them off, so we decided we needed to give ourselves some distance from that.”