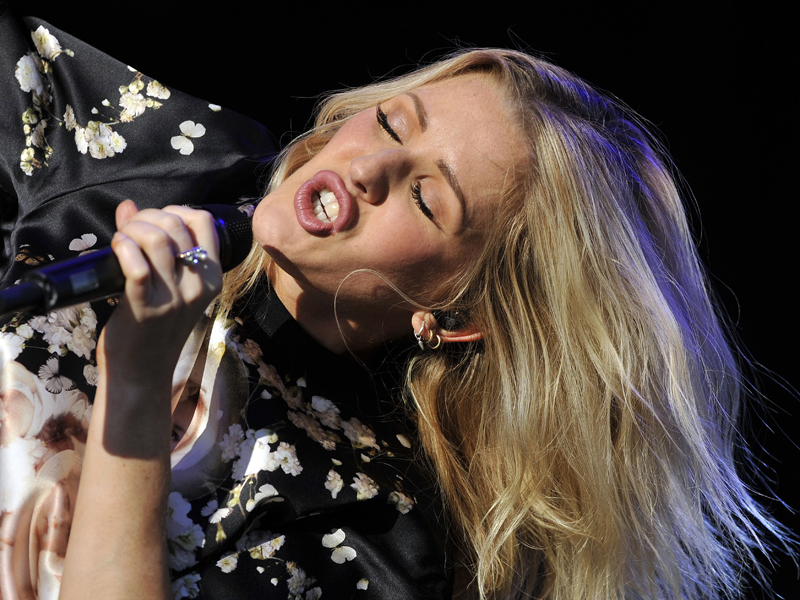 English singer Ellie Goulding has defended her pre-game performance at the AFL grand final after she appeared to miss the cue to her backing track, claiming she gives 100 per cent onstage “even when people don’t give much back”.

The English singer’s two-set show was criticised on social media after she took more than half a minute to begin singing Love Me Like You Do – leaving some wondering if the singer was lip-synching.

But Goulding responded to the comments on Twitter, claiming she did not lip-sync and blaming a technician for the hitch.

“Incidentally the sound guy who pressed playback twice and triggered both band tracks simultaneously is nowhere to be seen… ??”

She said she loved it when people think she lip-syncs, because it is “a rad compliment”, and added that, given she wasn’t on top form on Saturday, she was pleased with her performance.

“I give 100 per cent in my performances even when people don’t give much back. My fans know that. That’s because I love what I do so much. 🙂

“Truth be told I’ve been unwell the past week and I could do with a long spell chill but I was determined to give everything for Oz today.”

“Ellie performed live vocals to a backing track. This is a very common practice for performances in situations such as the Grand Final,” he said in a statement.

“Unfortunately a technical issue at the start of Ellie’s performance caused a brief hiccup but Ellie went on to prove just how much of a superstar she is, belting out two of her massive hits.

“Claims that Ellie lip-synced her performance are absolutely untrue.”

Love it when people think I lip sync, what a rad compliment 🙂 Now where does one find a good veggie restaurant in Melbs? On social media, fans were scathing towards the pop singer, labelling her efforts “underwhelming”, “rubbish” and “a waste of money”.

She even hit back at one footy fan who suggested the AFL’s social media operator must “on drugs” to offer her praise (see picture).

Some, however, praised Goulding and pointed their finger squarely at AFL organisers over the poor sound quality.

Conversely, barely a terse word was said about Grammy winner Adams or US crooner Chris Isaak. The latter opened the pre-match spectacle.

In the lead up to the grand final, Adams joked about avoiding a ‘Meat Loaf meltdown’, in reference to the notoriously woeful pre-grand final performance of the US rocker in 2011.

Goulding, meanwhile, admitted she was nervous.

“I’ve been panicking for the past few hours,” she said before the match. “I’ve never watched [AFL] before, but I’m excited to learn a little bit about it.”

“I’ve heard it’s tight shorts, which is exciting, and they’ve got the guns out, the arms out, so I’m looking forward to that.”

Adams said he had attended a match years ago in Adelaide.

“It was good because I really brushed up on my swearing,” he said.

The Somebody’s Crying star said he’s used to playing in front of big crowds, having performed at the Superbowl, and all he has to do is get up and “sing”.

Aussie performers at the big game included Mike Brady with his traditional footy anthem Up There Cazaly and Kate Ceberano, who delivered a less than perfect national anthem, jumbling the lyrics.

Ellie gets vocal about her ‘Meat Loaf moment’