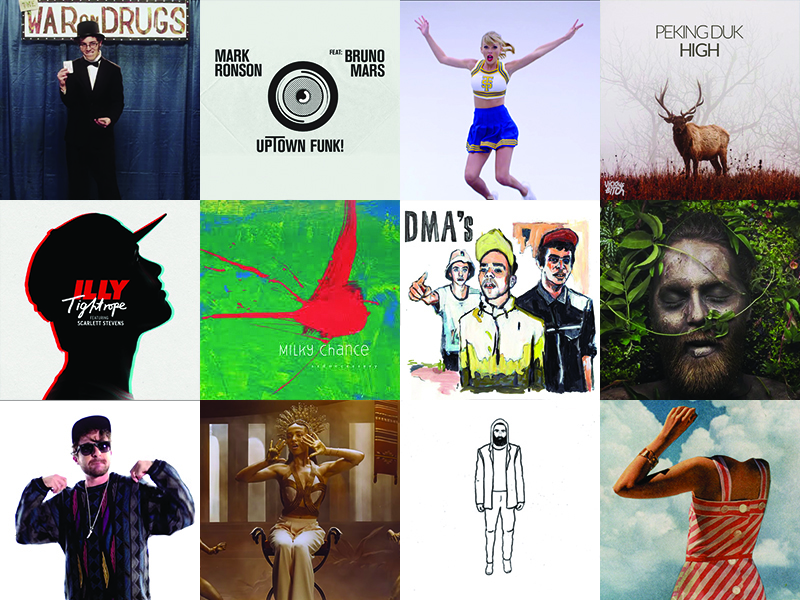 For many of us, Australia Day guarantees a few simple pleasures: a day off, barbecues, beers and – equally importantly – the Triple J Hottest 100 countdown.

Run every year by the ABC’s youth radio station since 1993, the fan-voted poll of the greatest songs of the past 12 months is more than just a list; it provides a snapshot of the year’s music highlights, documenting the changing tastes of Australia’s youth.

· Birdman review: Michael Keaton is sensational
· The most anticipated albums of 2015

Vance Joy’s ‘Riptide’ topped the 2013 list, following on from Macklemore and Ryan Lewis’ victory in 2012 with novelty smash ‘Thrift Shop’. Another stellar batch of tracks are vying for the title of the No.1 song of 2014, and the indications are that we will see an Australian winner for the 12th time – and the fourth occasion in the past five years.

So who’s likely to secure their spot in music history this year? And who are the outside chances? And what’s all this fuss about Taylor Swift?

Triple J has long been accused of music snobbery, ignoring big hits or pop artists if they’re deemed to be ‘too commercial’ by polarising music director Richard Kingsmill; many would argue that trait is a massive part of the station’s appeal. But the refusal of Triple J to play Taylor Swift’s ultra-catchy, mega-popular single ‘Shake It Off’ has provoked a grassroots social media campaign to get the song into the Hottest 100 countdown.

Buzzfeed’s Mark Di Stefano railed against Triple J’s Swift embargo, demanding to know: “WHY WASN’T SHAKE IT OFF PLAYED ON TRIPLE J THIS YEAR?!” The Twitter hashtag #Tay4Hottest100 is garnering plenty of support for the pop marvel’s inclusion … and the bookies are spooked.

After opening as a 251/1 long-shot, the odds of an upset win by ‘Shake It Off’ have been slashed to the extent that it is now second favourite behind Peking Duk’s ‘High’. The chances of Swift pipping the Canberra lads at the post seem remote – Triple J reserves the right to veto any song that has polled as a result of a campaign, and technically a song has to have been played on the station during that year.

Swift’s controversial spurning of revolutionary streaming service Spotify is representative of why she won’t – or shouldn’t – top the Hottest 100 on January 26, but it’s still an unmistakably cracking tune, and far better than novelty No.1 atrocities ‘Pretty Fly (For a White Guy)’ by The Offspring (1998) and the aforementioned ‘Thrift Shop’ (2012).

Canberra electro duo Peking Duk, with the help of Nicole Millar’s spine-tingling vocals, created the festival-ready anthem of 2014. Though released in February, ‘High’ has proven remarkably enduring and has surged into Hottest 100 favouritism. Peking Duk are also likely to grab another top-10 spot with ‘Take Me Over’.

The early front-runner, Chet Faker’s impassioned, down-tempo track ‘Talk is Cheap’ has been everywhere this year and sounded like a Triple J No.1 from the moment it dropped in February. The beardy Melburnian should net a stack of entries from his outstanding debut LP, Built on Glass.

Germany’s less boring answer to Mumford and Sons, Milky Chance have been one of 2014’s breakout acts with their reggae and electro-tinged folk. The irresistible ‘Stolen Dance’ is the best overseas bet in this year’s countdown.

A big late-year release is always in with a chance, putting the collaboration between producer extraordinaire Mark Ronson and pop megastar Bruno Mars – described as 2014’s ‘Get Lucky’ – right in the mix.

Bill Cosby’s recent controversies have probably blown out Hilltop Hoods’ odds of a maiden Hottest 100 triumph (the band has since admitted they regret name-checking the embattled comedian, although the song was released before the allegations against Cosby) but the Adelaide hip hop veterans are perennial Triple J darlings.

Future Islands – ‘Seasons (Waiting on You)’

If there’s a song capable of coming from the clouds to win it, it’s Baltimore trio Future Islands’ searing ‘Seasons’. The Letterman performance, their Splendour in the Grass set, and the fact that it’s a great song, could get them over the line.

A Chet Faker song other than ‘Talk is Cheap’ getting up to win it would be a major boilover, but the comparatively upbeat ‘1998’ is a definite top-five hope.

Frankston rapper Illy’s shimmery ‘Tightrope’, with Scarlett Stevens contributing the chorus vocals, is the track most likely to knock Hilltop Hoods off top hip hop billing in the countdown.

Flying the flag for indie rock are Philadelphia’s The War on Drugs. Their stirring Springsteen-esque ‘Red Eyes’ is a solid chance to be the top-polling overseas track.

Future Islands – ‘Seasons (Waiting on You)’

Cloud Nothings – ‘I’m Not Part of Me’

Thundamentals – ‘Something I Said’