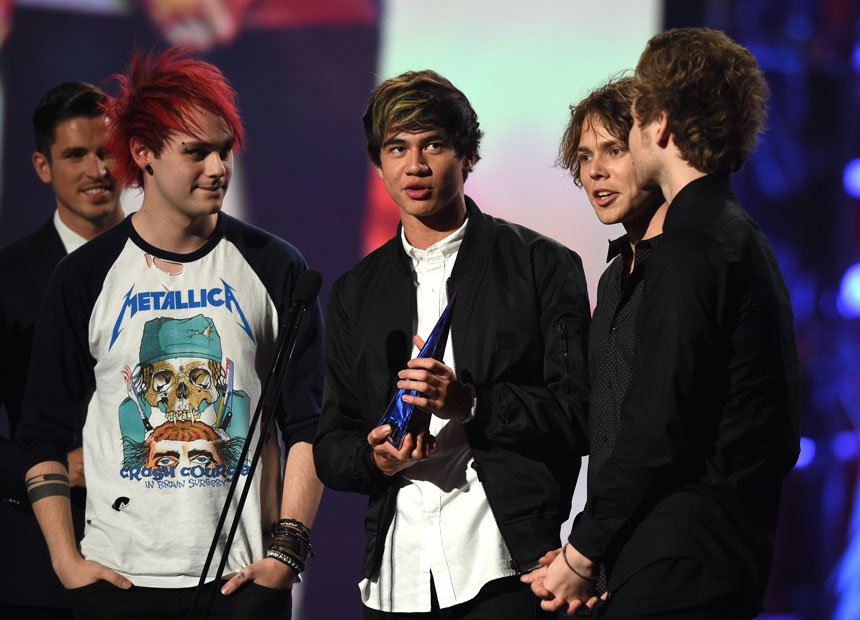 She didn’t swing from the Chandelier, she didn’t even make an appearance, yet Sia was still the biggest winner at the 28th ARIA Awards.

The Adelaide singer won four gongs for Best Pop Release, Best Video, Best Female Artist and the biggest award of the night – Album of the Year for 1000 Forms of Fear.

The notoriously shy pop star, whose big hit Chandelier dominated airwaves this year, didn’t make an appearance at the Sydney ceremony but she did draft in Katy Perry to accept Best Female Artist gong on her behalf.

• In pictures: the ARIA red carpet

Another no-show was Iggy Azalea, who won the ARIA for Best Breakthrough Artist. She had her Fancy collaborator Charli XCX accept the award.

“I’m going to drop it off to her and she’s going to enjoy it,” Charli XCX said.

Proving they weren’t too big to show their hometown they still cared, Sydney’s 5 Seconds of Summer were there to open the ceremony with their hit song She Looks So Perfect, which earned them the publicly-voted ARIA for Song Of The Year.

“Every single Australian has been behind our band and we’re just from Sydney and we can’t believe what’s happened to us,” Ashton Irwin said.

They weren’t the only big boyband to light up the stage. One Direction performed their latest hit Steal My Girl and accepted the award for Best International Artist, to whoops and cheers from the crowd – many of whom had been waiting since the early hours of Wednesday to catch a glimpse of the British stars.

Faker had already won three awards prior to the ceremony.

Music industry legend and Countdown host Molly Meldrum was given a standing ovation as he was inducted into the ARIA Hall of Fame.

Meldrum became the first non-recording artist to achieve the honour.

“I am just like everyone in this room. I am here because I love music,” he said.

Sia cleans up with four gongs at ARIA awards