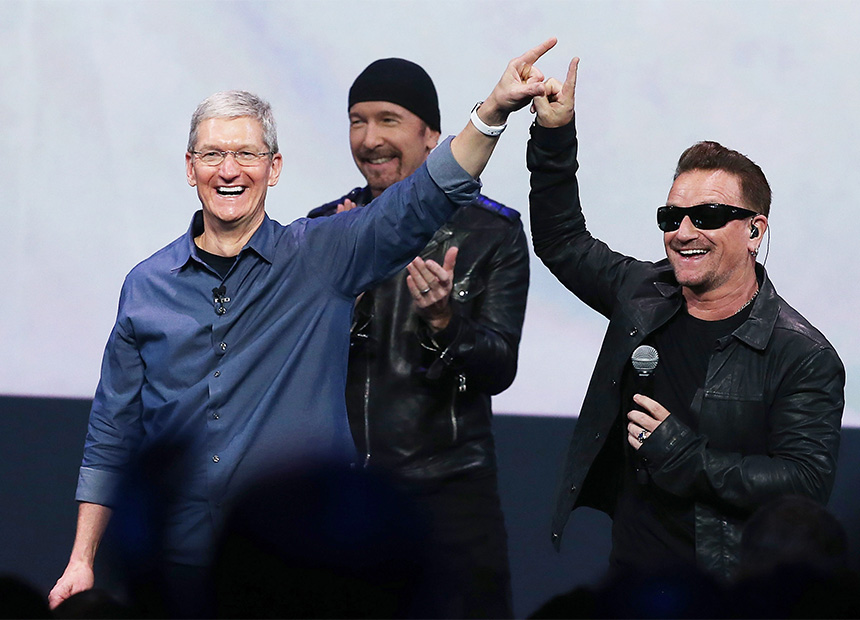 Last week, the world’s biggest rock band gave away their first album in five years. As part of the launch of Apple’s latest iPhones, the company allowed anyone with an iTunes account to instantly and freely download U2’s Songs of Innocence into their library. This week, Apple released instructions on how to quickly and easily delete it.

What might have seemed like a great act of corporate generosity has quickly become a marketing fail. Social media spewed venom as only social media can. Some high profile figures such as Tyler The Creator vented profane rage, but most of us just made wisecracks intended to prove we’re far too cool to ever listen to U2.

· Sour apples: iTunes users shun free U2 album
· Review: ‘The Miracle (of Joey Ramone)’ by U2

Certainly, much of the reaction is down to a general perception (not entirely unkind) that U2 are about as cool as morris dancing. Their last album No Line On The Horizon was positively soporific and the previous two sounded like a band playing it safe, rather than charting new ground. Songs of Innocence actually isn’t half bad. It’s more one-third bad and two-thirds overly familiar.

It was also the long, and some what passe, relationship between Apple and the band, spanning a at least a decade when Apple released a special edition U2 iPod.

A la carte or all you can eat

Some critics have worried that a world class band giving away an album devalues music for everybody else. Others have suggested the backlash is entirely overblown. Fairfax columnist Bernard Zuel suggested complaining about a gifted album was like moaning about a free plate of expensive food. For many, however, it was more like slipping a plate of raw and bloody steak into a vegan’s fridge. By shoving an unwanted (and deeply unfashionable) album into our music libraries, Apple desecrated a very private and personal space.

Music libraries, like any other kind of collection, are necessarily personal. We expect our collections to define us and, ideally, to earn us respect from our peers. In today’s shared media space, we curate ourselves when we curate these collections and many of us (via Spotify updates, etc) try to make sure everyone else knows exactly how cool we are. Writing about the demise of the iPod in Wired, Mat Honan noted: “Looking at someone’s iPod was like looking into their soul. In their music you could see who they were.” For some, having a U2 album in their iTunes is as damning and embarrassing as finding a signed copy of Fifty Shades of Grey on their bookshelves.

But this firm linking of identity and music taste might be as outdated as the iPod. Talk to the teenagers of today — who I like to call the Shuffle Generation — and you’ll see the idea of defining yourself via a genre or band is distinctly old fashioned. Teens today swap entire libraries, rather than albums, and their iPhones are packed with everyone from Beyonce tothe Beatles, often in the same playlist. As playlists become the norm, few listen to albums from go to whoa. Harriet Walker worries that this quick dump and run is leading to tastes becoming “woefully generic” and preventing a “sense of community between fans”.

Still, even those with generic tastes have reason to be unnerved by Apple’s stunt. For some, this is a discomfiting reminder that we don’t really own anything we buy digitally, only the licence to use it. It wasn’t true that Bruce Willis went to war on Apple when he discovered his kids couldn’t inherit his massive iTunes library, but the phoney story played on fears of what happens to our digital belongings when we kick the bucket or the provider changes the terms. By generously bestowing an un-asked-for album upon us, Apple have let us know that we continue to access our library through their good grace. The U2 invasion is, at heart, a display of power. In that light, when users take the trouble to delete Songs of Innocence from their devices, they are making a small gesture towards reclaiming control.

That’s one explanation. Another is they’ve simply discovered the sense of community that comes from getting together online for a really good moan.

Shades of grey: U2 and Apple are out of touch