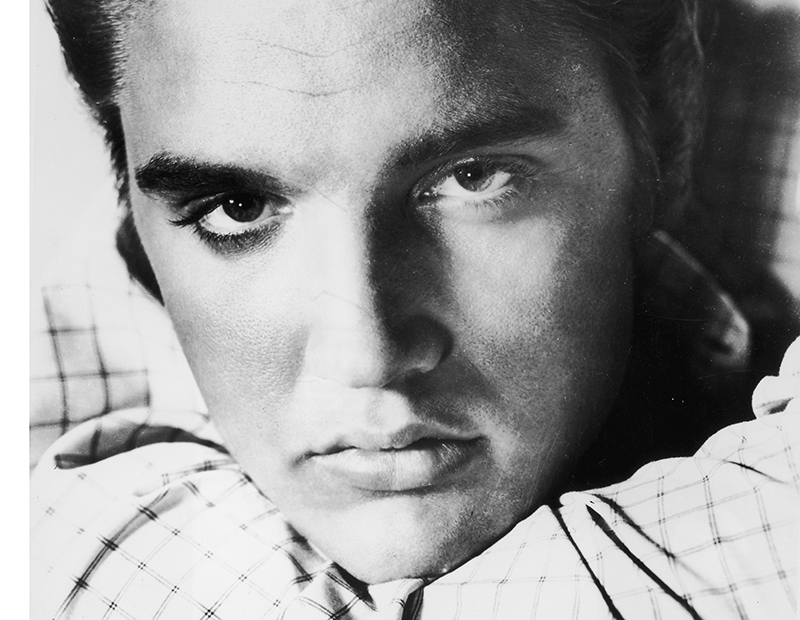 This weekend marks the 37th anniversary of the death of Elvis Presley, and it seems we become more detached from his legacy with each passing year. Here are 10 reasons to still love the ‘King of Rock and Roll’.

‘Heartbreak Hotel’ (1956)
This bluesy cut became Elvis Presley’s maiden No.1 hit (12 weeks after its original release), and perhaps captures his essence better than any song in his bulging catalogue. On a less cheerful note, the lyrics were inspired by a newspaper article about a lonely man who jumped from a hotel window to his death.

‘Hound Dog’ (1956)
If you only know one Elvis classic, it’s probably ‘Hound Dog’, the first track that fully showcased his rock and roll chops – and subsequently sent teenagers crazy and parents’ anxiety levels through the roof. It’s still a great party song, and came in at No.19 in Rolling Stone’s ‘500 Greatest Songs of All Time’. Here’s Elvis performing ‘Hound Dog’ to a delirious audience during one of his early appearances on The Ed Sullivan Show.

Jailhouse Rock (1957)
Elvis’ third movie was his most controversial, portraying a young convict in jail for manslaughter, among other scandalous themes. The eponymous song is also one of Presley’s most iconic.

‘Are You Lonesome To-Night’ (1960)
Elvis loved his romantic pop ballads and ‘Are You Lonesome To-Night’ was arguably his most swoon-worthy. Quirky in comparison to his usual smash-hit fodder at the time, Presley recorded the song (which was penned in 1927 by Lou Handman and Roy Turk) as a favour to Colonel Tom Parker’s wife – but it still stands up as one of the great love songs.

‘A Little Less Conversation’ (1968)
Only a minor hit when it was released, ‘A Little Less Conversation’ became a worldwide smash when a later re-recording by Presley was remixed by Junkie XL in 2002, topping the singles charts in 24 countries. Released under the name Elvis vs. JXL, it was a dance-floor filler and reconnected us with ‘The King’. Given you’ve probably heard the remix hundreds more times, here’s the original as it appeared in the 1968 musical comedy Live a Little, Love a Little.

’68 Comeback Special (1968)
Elvis’ focus on his movie career for the better part of the 1960s, and the simultaneous British Invasion, chipped away at his popularity as a musician. But he validated his ‘King of Rock and Roll’ mantle with an acclaimed TV special in December of 1968, revitalising his music career in the process.

Aloha from Hawaii (1973)
He appears chubbier, sweatier, more substance-addled and far less sexy than in his prime, but Elvis’ performance in Aloha from Hawaii was one of his greatest and a groundbreaking television event, aired live via satellite into over 40 countries across Asia and Europe. Promoters claimed a worldwide viewership of 1 billion.

Elvis impersonators
‘The King’ may have died in 1977, but there is estimated to be up to 35,000 fanatics around the world dedicated to providing us with the next best thing. From genuine performers to wedding celebrants, there’s an Elvis impersonator for every occasion, while WWF wrestling superstar The Honky Tonk Man based his entire persona on an Elvis schtick.

The ‘Elvis is still alive’ believers
Jim Morrison, Andy Kaufman, Bruce Lee – everyone loves a celebrity death conspiracy theory. But Elvis is the big one. Regular polls indicate around 10 per cent of Americans believe ‘The King’ is still kicking around, with alleged sightings abundant. Entire groups are dedicated to it, although some – such as the ‘Knights of the King’s Realm’ – cross the line from endearing to creepy.

‘What a hit’: Albanese on attack after dire wages data
Inquiry into mother’s convictions over deaths of four children
Viagogo loses appeal over $7 million penalty
Sydney home sprayed with bullets in gang violence
‘Admit what the hell is going on’: Biden wants US to face White Supremacy problem
Device detonated, man arrested in Brisbane sieges
Dylan’s Australian tour is a must see. Here’s why
Today's Stories

Ten reasons why Elvis is still the king