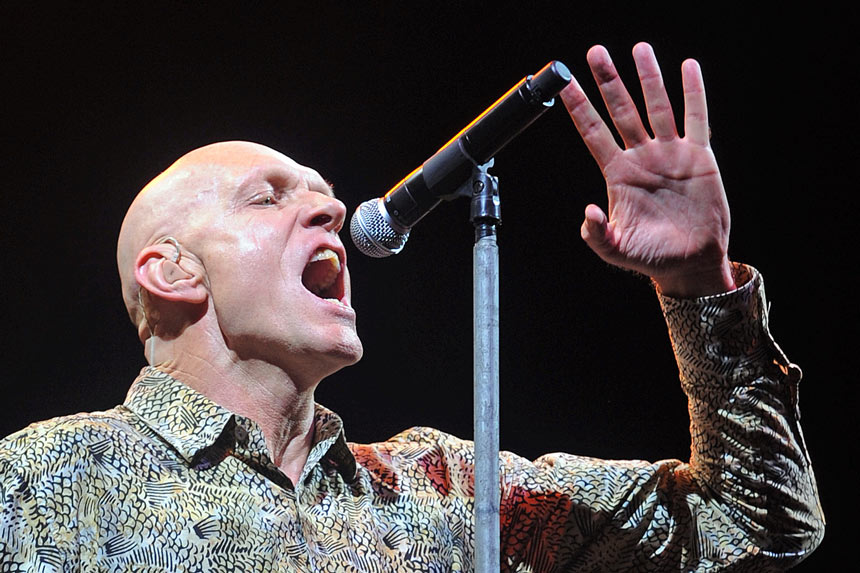 Three decades is a long time in rock ‘n roll for acoustic guitar-wielding baby boomers like Shane Howard. Musicians of a certain ago are now asking, where is new generation of protest songwriters?

The past decade’s charts have been largely devoid of message-music of the kind produced by Midnight Oil when the band rocked-out about land rights in the early 90s.

“Malcolm Fraser gave the Oils a lot of material in our early days,” said The Oils’ Rob Hirst. When asked where the new generation of protest singers are, his response was a bemused one.

“You mean like a young Ani  DiFranco? That’s a good question.”

He said Gen Xers like Urthboy and John Butler have since put some political grunt in Oz music in the mid-naughties. However, a cursory glance at the last few year’s ARIA charts reveal that the last album with any overt political content to hit no.1 was John Butler’s Sunrise Over Sea in 2004. Since then, it is a struggle finding any up-coming van-guard to fill his shoes.

Acoustic songstress Penelope Swales, 44, spent 20 years touring with songs about the environment and social-justice. She earned her stripes by playing at rallies and benefit gigs.

“Gen Y seem pretty apathetic to me on the whole. There seems to be a bit of political activity going on in society, but it’s non-radical.”

She believes that issues like climate change and growing up in the Age of Terror have left kids with the feeling that “the future is so uninhabitable they just don’t know what to do about it”.

“If you look back at the 60s and 70s, there was a lot of political song-writing going on and people genuinely believed that they could change the world. Whereas young people now, I don’t believe that they think that.”

Gen Y artist, Ashleigh Mannix, 24,  performs at the larger blues and roots festivals. She’s dismayed by the current political climate and said that for her, music is an escape.

“Anything we hear on the news is all very petty, it seems to me. Whatever conversations are had between ministers all seem very petty. I don’t wanna talk about that in my songs.”

“Commercial radio and television are frightened of alienating an audience and risking a drop in ratings so much that they refuse to program anything but a non-offensive middle-ground. Commercially focussed pop music doesn’t lend itself to complicated messages.”

That’s maybe why so many young people have taken their political voice online instead. Rob Hirst argues that “new media has changed the delivery of the message. They’re using internet forums to do it instead of the traditional way”.

“There’s no shortage of young people interested in what’s happening to Australia and wanting to participate, it’s just that they’re doing it in different ways.”

Melbourne news-parody hip-hop crew, Juice Rap News have global cult following. They are arguably the most overtly political   musicians in the local music scene, but appear nowhere in the charts. They take on issues like surveillance, war and whistleblowing. They recently had a little help from Julian Assange.

“He needs a bit more practice in rapping, but he compensates in other departments,” said Juice rapper Giordano Nanni, at the Woodford Folk Festival, where their set was cut short by a surprise appearance by then PM, Julia Gillard.

“He got in touch with us and invited us to go to London to work on an episode in which we did a cameo with him.”

Hugo Farrant, aka Juice News anchor Robert Foster, said: “If you want to have a dense conversation in music, rap is one of the best ways to do that. It was referred to by Chuck D as the CNN of the ghetto.”

He said that traditional forms of making and recording music are being superseded by new media.

“Music was the medium when we lived in an audio culture. Nowadays people are finding if you combine music with video content then you can get a much more effective result. Even a cursory glance at YouTube will reveal that there’s a heap of people doing this,” he said.

“They don’t want to go through the traditional route of recording CDs.”

Both sides of Us politics tried to ban the song at the time because they thought the kids would start killing cops – which they didn’t. The label later pulled the song from the record and re-released it as a single. US rapper, Ice T, refers to the bashing of Rodney King and other police brutalities.

Hailing from the remote Aboriginal community of Papunya, NT, these guys were the first band to sing western-style rock in traditional language. They had a charismatic front-man who knew how rock-out. This song is about corporate greed exploiting rural communities. A possible Katter campaign song?

An antidote to the Age of Terror. UK rapper Maxi Jazz saw through the spin that gave a voice to jingoistic slogans from those baying for blood in Iraq. The track got heaps of Triple J airplay and was a topic torn from the day’s headlines.

What’s not to love about puppet vomit and puppet sex? The movie by the South Park guys has heaps of offensive jokes straight from the toilet. It’s a statement about US foreign policy, post 9-11, using Thunderbirds style marionettes. The naughty soundtrack was something to laugh at at a time we were supposed to be terrified. Don’t watch if you are a Matt Damon fan.

The much-maligned Bono was lambasted for rubbing shoulders with George Dubya and the Pope. However, the Irish supergroup highlighted its country’s troubles with this fist-shaking anthem about the civilian cost of civil war. It’s off their seminal ‘War’ record with an angry kid on the sleeve. Check out this live version – Bono is on fire!

Pauline Pantsdown is a political activist drag queen who ran for the Senate in 1998, getting nearly 2300 first preference votes. He also sampled the One Nation Leader’s voice to create this cheeky track. For some reason, Pauline Hanson was highly upset and threatened legal action, so Triple J had to pull it from broadcast. It still made no 5 in the station’s Hottest 100. Also check out his other hit, I Just Don’t Like It.

You’ve heard one RATM album and you’ve heard them all. The band repeats the same angry message to go out and burn everything. Know Your Enemy is a slap-in-the face against apathy and complacency. I still bear the mosh-pit injuries from their 1996 Big Day Out gig.

Redgum used dry sarcasm to sing about neglected issues. Here the band laments Australia’s nuclear industry with the help of a mandolin, flute and fiddle. In 1998, singer John Schumann stood for the Democrats in the seat of Mayo. He got 22 per cent of the primary vote which reduced Alexander Downer’s majority to 1.7 per cent.

This Melbourne muso wrote the tune outside the Prahran Magistrates’ Court while waiting to testify against a cop who bashed an anti-militarism activist. Penelope’s co-witness inspired the song after deciding to dedicate her life to becoming a full-time greenie.

How we all became excited when Peter became the environment minister. He was gonna save the ALP and become PM! Things didn’t quite work out on that score, but we have his band to remind us to keep fighting the good fight. Pictures is a spine-chilling call to arms over rampant environmental destruction, with the most political music video ever made, in my view.

Why did protest songs get moved to the endangered list?