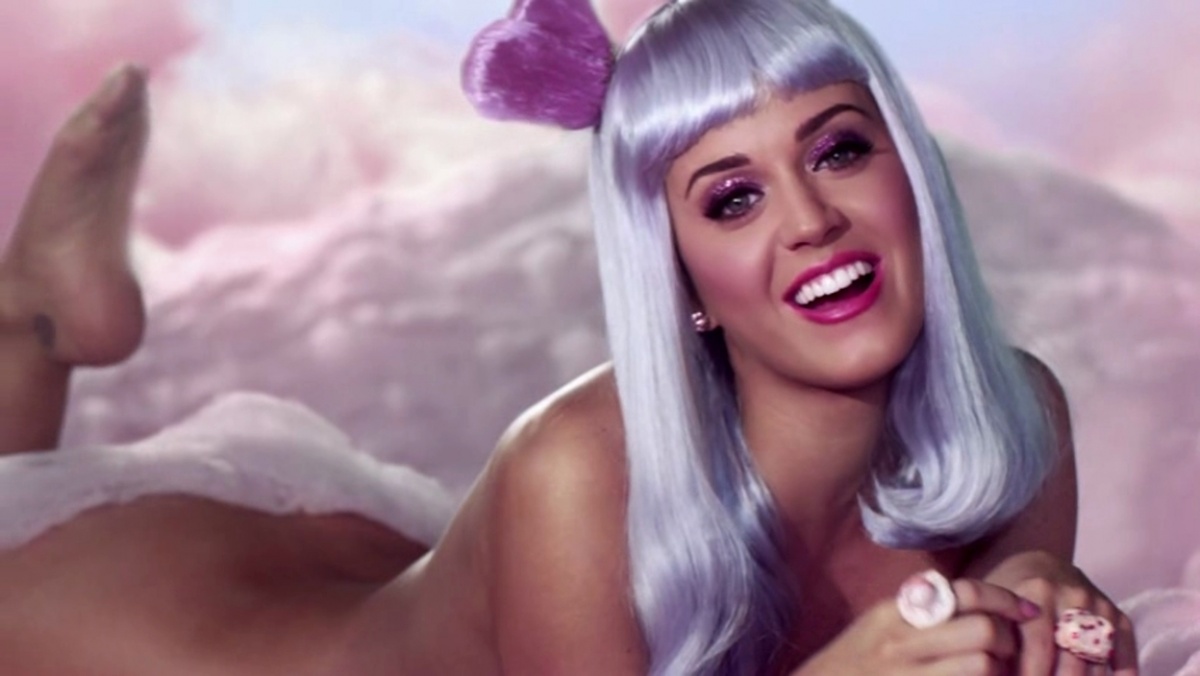 Katy Perry left the nuns less than impressed, not least with her Jesus tattoo.

Katy Perry doesn’t hold back when it comes to her music videos. Or anything, for that matter. With the recent release of her video for the single Unconditionally, we pay tribute to her journey from the satin-corseted unknown in I Kissed a Girl to the pop phenomenon she is today.

Simple (2005)
This Alanis Morissette-like song featured on the soundtrack for the first Sisterhood of the Traveling Pants film. Even early on, Katy’s trademark sass and quirky lyrics are evident, but the pared-back video is missing the usual elaborate stage costumes and false eyelashes.

Unable to view videos on your iPad or tablet? Try switching to a desktop computer.

Ur So Gay (April 2008)
This song, ridiculing an ex-boyfriend for his painful self-awareness, is controversial given its use of the word “gay” as derogatory. Now an outspoken supporter of gay and lesbian rights, we’re not sure Perry would look back on this song very favourably. The best part of the video is the creative use of Barbie dolls to create most of the action – a great option for a budding star on a budget.
Warning: Explicit content

I Kissed a Girl (June 2008)
The song that started it all and another single with a controversial subject matter. The hit was a surprise for Perry’s parents, who are evangelical preachers. The video clip is delightfully girly and cemented Perry’s status as a sex symbol very early on.

Hot N Cold (October 2008)
An anthem for any girl who has dated a confusing guy, Perry perfectly summed up the rollercoaster ride of love. The singer proved she liked to tell a good story with the whacky wedding opening and also demonstrated that she loves a good costume change, two qualities which came to define her later videos.

Thinking of You (January 2009)
Channelling Bettie Page, Perry showed her softer side by playing a grief-stricken war widow forced to move on to another man. Reminiscent of The Notebook, this clip is another mini-movie and a bit of a tearjerker if you’re feeling particularly emotional.

California Gurls (June 2010)
The most parodied clip in Perry’s repertoire, set designers created a Candyland based on the paintings of New York-based artist Will Cotton. The Austin Powers-esque boob guns at the end of the clip and Snoop Dogg’s slightly creepy cameo as candy king are particular highlights.

Teenage Dream (August 2010)
With this carefree summer mega-hit, Perry perfectly encapsulated the recklessness and romance of youth. The raunchy love scenes littered throughout the clip no doubt helped to increase the number of Youtube viewers to over 133 million. The success of this song proved Perry to be a bona fide superstar.

Firework (October 2010)
This inspiring music video encouraged insecure teens to “ignite the light and let it shine.” An anthem for embracing your flaws and having courage and confidence in difficult times.

E.T. (March 2011)
A change of pace for the star, this hit was out there in more ways than one. The music video, set in space, lacks the usual charm of her other offerings, featuring an alien Perry hurtling through the atmosphere. A floating Kanye West and a strange attempt at product placement (at 4:20) doesn’t help the situation.

The One That Got Away (November 2011)
A nod must be given to the talented makeup artist who made Perry a believable old woman in this sad tale of love lost starring actor and indie film favourite, Diego Luna. We dare you not to tear up at the end.

Part of Me (March 2012)
A clear jab at ex-husband Russell Brand, Part of Me stars Perry as a woman wronged who decides the best revenge is joining the marines. It probably painted a pretty inaccurate picture of the life of a female marine, but it was Perry’s way of telling the world she was ready to fight back and start over.

Wide Awake (June 2012)
Another reference to her relationship with Russell Brand, the music video for Wide Awake picks up where California Gurls left off and shows the darker side of Katy’s personal life at the time (she has spoken of being suicidal during the divorce).

Roar (September 2013)
The first single from her already bestselling album Prism, the song is an ode to girl power and, in the video, Perry is a perfectly-coiffed jungle queen. Despite it having over 250 million views on Youtube, not everyone loved the clip – PETA slammed the singer for using animals as entertainment.

Unconditionally (November 2013)
A whimsical Winter wonderland just in time for Christmas, the set of the video mirrors the romantic message of the song – to love someone without fear. The gushing lyrics are no doubt a nod to her current romance with fellow singer John Mayer, which she has called “a rad, mature relationship.”