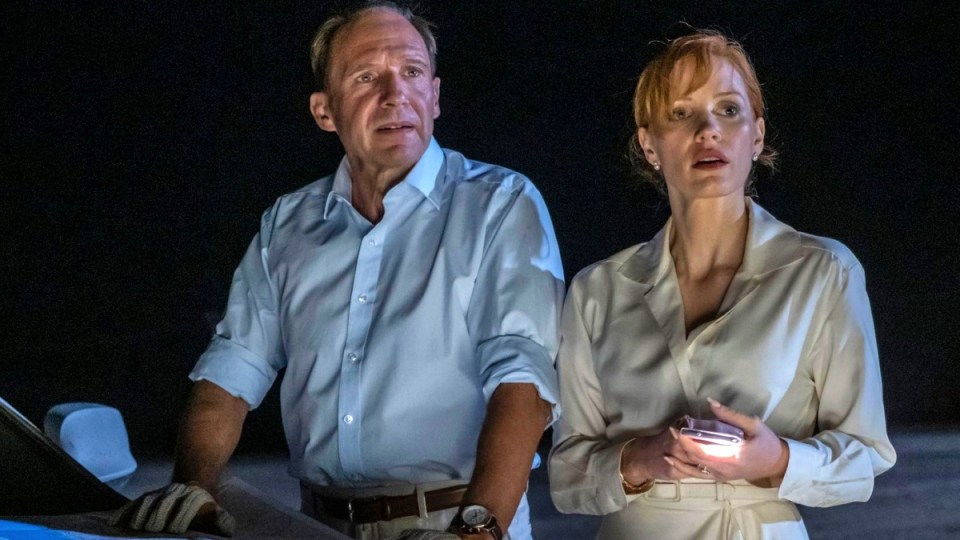 Morocco’s draw as a mecca for outsiders wanting to hide their secrets in the desert sands gets a shake-up in The Forgiven, a strange and unnerving film whose fine cast makes it difficult to look away.

David (Ralph Fiennes) and Jo Henninger (Jessica Chastain) are a married couple from London who have just arrived in Morocco for a weekend getaway and party at the desert compound of Jo’s wealthy gay friend, Richard (Matt Smith).

They are tired and testy, hot and a bit bored with it all, and their relationship has deteriorated into thinly veiled hostilities. He drinks too much and takes some pride in being called a high-functioning alcoholic, laughing it off as wordplay.

After putting away a bottle of wine, David takes the wheel and they set off for the resort, driving into the night without knowing quite where they are or where to turn off. It gives little away to say that disaster strikes.

An Arab teenager suddenly appears on the road and waves at them but they mow him down, not just hitting him but driving over his body.

Suddenly sober, they put his body in the back and make their way to Richard’s, hoping he can sort it out. And he does; he knows the local police chief who arrives the following day.

But what unfolds next becomes a thriller as David and Jo try to put this unpleasantness behind them.

The party continues in full swing with Richard and his boyfriend Dally Margolis (Caleb Landry Jones, last seen in Justin Kurzel’s Nitram) wearing lipstick and sipping fruity cocktails as their guests indulge in whatever debauchery takes their fancy.

Watching, serving and being paid to facilitate this is the Arab staff, whose silent judgment of such behaviour is countered with outright racism and the ingrained white privilege of the oblivious guests.

Richard has the police in his pocket but the desert starts to intrude.

The dead boy’s father, a desert nomad, arrives at the gate and out of some remnant of honour and a lot of guilt, David goes out to meet him, just as the evening’s fireworks begins.

The expectation is that he wants money, but the father wants something more profound and here the real intrigue begins.

David, increasingly chastened, agrees to accompany him to his village, leaving Jo to indulge herself in a callous bout of self-discovery with a baby-faced guest, Tom (Christopher Abbott).

We become increasingly aware that in contrast to the abundance inside Richard’s fortress, the desert people have almost nothing but their children and a tourist trade in fossils – beautifully preserved ammonites and trilobites – that they dig out, polish and sell.

The Forgiven looks shimmering and exotic, but be warned, it has bitterness at its heart.

David feels some glimmerings of remorse at the way he not just killed someone, but tried to cover it up, and seeks in his own way to make amends.

This is not the first or last time a soul has been lost in the unknowable sands of the Sahara.

The Forgiven is now in cinemas.

The Forgiven: A shimmering and exotic-looking film with bitterness at its heart