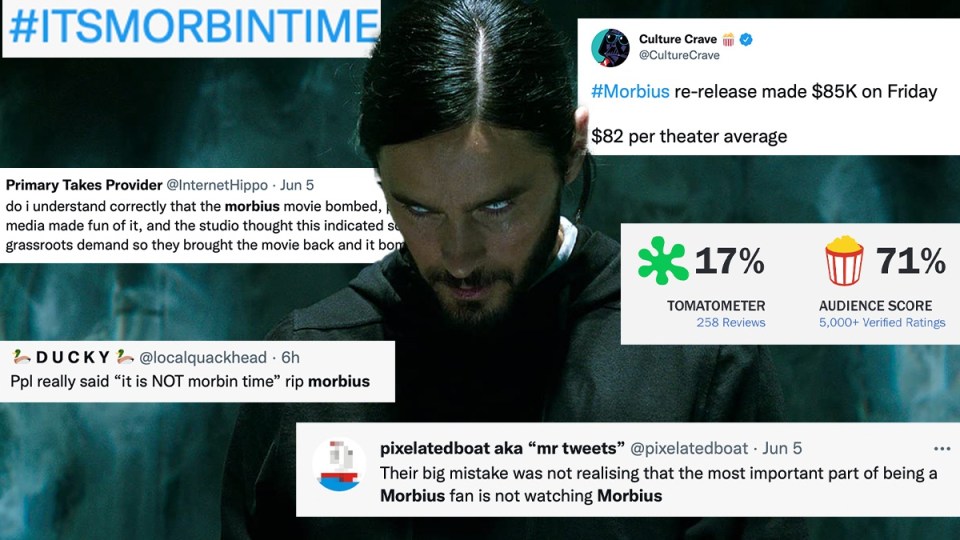 For the past several weeks, Morbius has trended on social media ... and not in a good way. Photo: Sony Pictures, Twitter

Two months after Morbius premiered in cinemas and triggered a legion of brutal memes, Sony decided to re-release the film, hoping to capitalise on internet culture.

Which begs the question: What on earth was Sony thinking?

A collaboration between Columbia Pictures, Marvel and Sony Pictures, Morbius originally landed in cinemas on March 31 in Australia.

It starred Jared Leto as the titular character, a human biologist who accidentally becomes a vampire after trying to cure himself of a deadly disease.

Morbius made $US163 million ($227 million) worldwide, including just $74 million ($103 million) at the North American box office, a rather underwhelming number for a film based on a Marvel character.

Critics weren’t any help, either. The film’s overall critic rating on Rotten Tomatoes is 17 per cent.

“Morbius is a forgettable, often laughable, entry in Sony’s attempt to fill its own Spider-Man-adjacent cinematic universe, a poorly edited, derivative time suck – pun intended,” a review from the Associated Press read.

Fans, meanwhile, chose not to exile Morbius to the land of film flops.

Instead, they decided to ridicule the film by ironically praising it online.

The film currently has an audience score of 71 per cent on Rotten Tomatoes, which is quite literally the inverse of the critic rating.

“The greatest morb movie of all time[.] Highly recommended[,] I’m currently morbing myself as we speak … after all it’s morbin time,” said another.

“It’s Morbin’ time” has become the unofficial catchphrase of the film, repeated so many times across the internet that people started to mistake it for actual dialogue from the film.

So for the last several weeks, Morbius has trended on Twitter.

Part of the fun was making #MorbiusSweep trend on Twitter, a hashtag that jokingly claims Morbius is one of the most critically acclaimed, financially successful and universally beloved movies of all time.

“#MorbiusSweep everyone showed up in their best Morbius cosplay today,” one user tweeted with a photo of an empty cinema.

Another image doing the rounds features a photoshopped screenshot of the highest-grossing films of all time, as listed on Wikipedia.

In this alternate universe, Morbius also has an audience score of 969 per cent on Rotten Tomatoes.

The memes attracted so much attention that Leto, Morbius frontman, joined in.

The actor shared a video of himself reading a fake script titled, Morbius 2: It’s Morbin’ Time.

To be clear, Sony has not announced a sequel … yet

All press is good press?

Nobody but the people at Sony know the thought process behind the re-release. Perhaps all press is good press, even the really, really bad?

Maybe they thought the memes would translate into people buying tickets for the re-release.

But in the end, all the re-release did was trigger another wave of brutal memes.

Fans couldn’t quite believe that Sony interpreted the memes as some sort of impassioned public effort to see the movie back in theatres.

Well, one would hope Sony has figured out the difference between internet culture and the real world, and how the former does not accurately reflect the latter.

One would also hope Sony does not misinterpret the online response to the re-release as a genuine interest in a sequel, as joked about by Leto.

But after everything that has happened so far, one can’t rule it out just yet.

Sony re-released Morbius in cinemas thanks to viral memes. The movie bombed hard