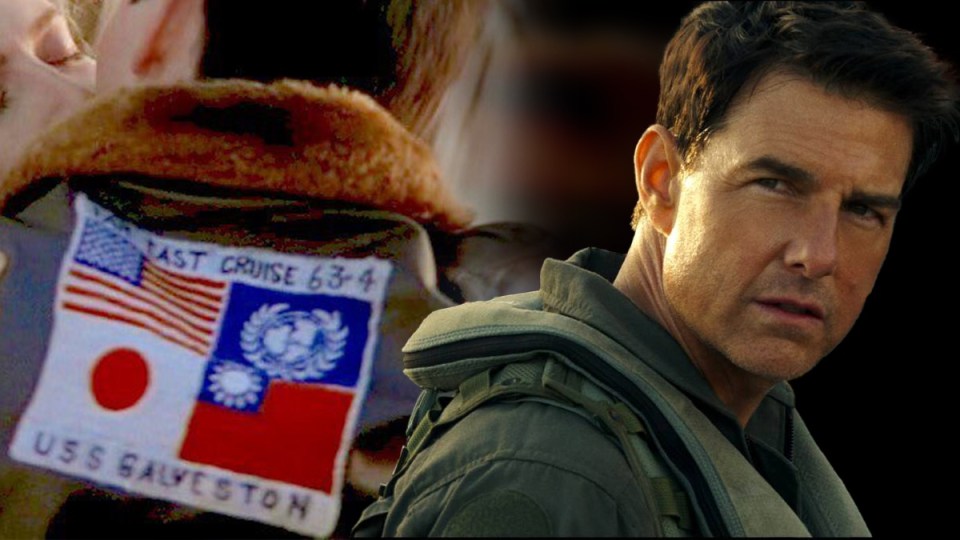 Although the film has premiered in Taiwan, it has yet to be released in mainland China. Photo: Paramount, TND

Moviegoers in Taiwan broke into applause during an advanced screening of Top Gun: Maverick – not because of the crazy stunts, but because they saw their flag.

Tom Cruise has reprised his role as the iconic Pete ‘Maverick’ Mitchell in the long-awaited sequel, once again donning the character’s iconic bomber jacket.

It’s the very same one seen in the original 1986 film, complete with a Taiwanese flag patch, unlike the altered jacket spotted in the movie’s trailer that sparked controversy.

Back in 2019, Cruise appeared at San Diego Comic-Con to unveil the very first trailer for Top Gun: Maverick. Although it initially delighted fans, it soon caused a stir.

After the trailer’s premiere, eagle-eyed fans noticed a significant difference between the classic leather jacket Cruise wore in the original film and the one shown in the 2019 trailer.

Two patches on the back of the jacket that originally bore the Japanese and Taiwanese flags on them were replaced with unidentifiable symbols in similar colours.

According to database company Statista, China is the world’s largest film market as of February 2022. At the time of the trailer’s release, it was the second-largest.

Fans did the maths, concluding that Top Gun: Maverick wanted to appease its Beijing audience. And that meant scrapping the Taiwanese flag.

Taiwan sees itself as an independent country, with democratically elected leaders. China, meanwhile, claims Taiwan is one of its provinces.

At the time, several users on Twitter also pointed out that Chinese tech giant Tencent was one of the backers of the sequel.

But the Wall Street Journal, citing unidentified sources, reported last week that Tencent pulled out as a financier of the film in late 2019, amid tensions between China and the United States.

Tencent apparently had second thoughts about supporting a film that is extremely pro-America.

So with Tencent out of the picture, it appears Top Gun: Maverick decided to send a message, regardless of how it will affect its box office numbers in China, where the film has not yet been released.

Taiwanese news outlet Setn reported audiences at an advance screening  erupted in applause when they saw their flag – a symbol of defiance – on Maverick’s jacket.

The outlet wrote that “many Taiwanese viewers [were] very moved, surprised and delighted”.

And, as of Friday, Lady Gaga’s Top Gun: Maverick song, which features in the film’s final scene, is the eighth most-played song in Taiwan, according to Apple Music.

“The market is simply not worth the aggravation anymore in attempting to please Chinese censors.”

Last May, Peacemaker star and wrestler John Cena infamously apologised to China for referring to Taiwan as a country.

In North America, Top Gun: Maverick opened to a stratospheric $US124 million ($170 million) in its first three days.

The long-awaited sequel is Cruise’s first film to crack the $US100 million mark in its opening weekend.

Before Maverick did its thing, Cruise’s biggest North American debut was in 2005, with Steven Spielberg’s War of the Worlds. The film opened to $US64 million ($88 million).

Mission: Impossible – Fallout premiered in 2018 for $US61 million ($84 million) in its opening weekend.

In our neck of the woods, Top Gun: Maverick took the No.1 spot at the Australian box office during its opening weekend, with a total four-day box office gross of $13.8 million.

The film is Certified Fresh on Rotten Tomatoes, with a near-perfect score of 97 per cent from critics and 99 per cent from viewers.