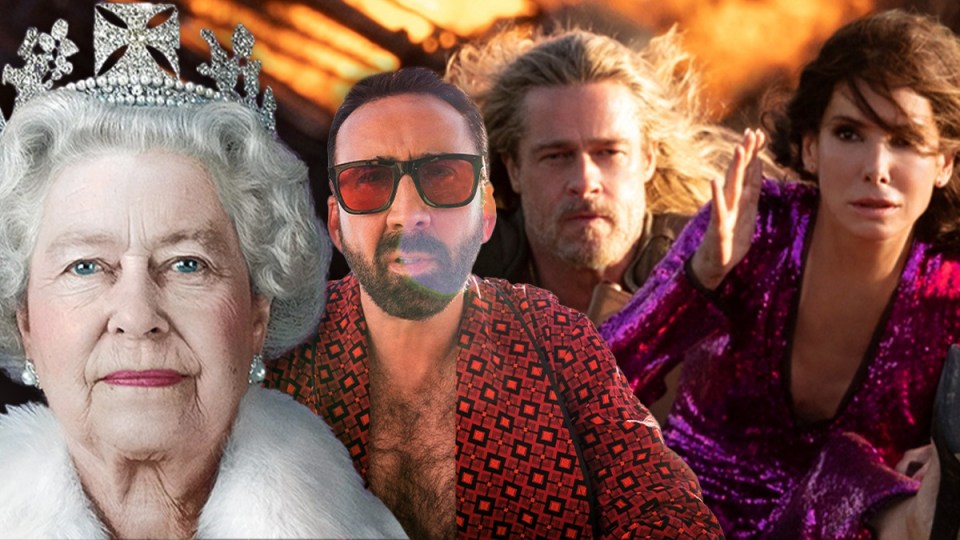 From a documentary about the Queen to a Brad Pitt cameo, there's a big screen movie for even the most discerning viewer this month. Photo: TND

Just when you all wanted to take a break from the wonderful world of blockbuster movies and indie flicks after the Oscars, April is turning out to be a surprising month.

In timely fashion, to celebrate her Platinum jubilee to mark 70 years as head of the British monarchy, there’s a delightfully edgy big screen documentary about Queen Elizabeth II.

Described as a poetic celebration of her life, Elizabeth: A Portrait in Parts is a “nostalgic, uplifting and modern documentary” to be released nationally in cinemas on April 21.

The late British film director Roger Michell (Notting Hill, Tea With The Dames) was given “extraordinary” access to a stack of rare footage from the Royal Archives and put together a film offering a “glimpse of the woman behind the legend”.

According to Deadline, Michell finished Elizabeth just days before he died in September.

Producer Kevin Loader recently said of the film: “Roger literally finished this last film the day before he left us.

“His film contains all his trademark emotion and playfulness, combined with a proper search for truthful insight into the woman who was Queen when most of us were born, and still is.”

Beatles icon Paul McCartney speaks for the nation in the doco when he says “we grew up loving the Queen”.

“To us teenagers, she was a babe”.

Cut to the 2017 song Royal Highness by UK singer-songwriter Tom Grennan, the trailer includes snippets from a school kid saying they have a Queen “so she can look after our country”, as well as the Queen herself remarking that if she leant forward wearing her crown, her neck would break.

There’s WWII vision of the bombing of London; her reaction and speeches after the death of Diana, Princess of Wales; and behind-the-scenes footage of a young Prince Harry stepping on her toe as her grandchildren played with ponies.

But if a film about British royalty isn’t your cup of tea, Nicolas Cage is seriously funny in his latest movie, as is Hollywood royalty Brad Pitt with his cameo in The Lost City, before he embarks on the two blockbusters Babylon and Bullet Train later this year.

Oscar-winner Jared Leto may have had a small role in House of Gucci, but in Morbius he dominates screen time playing one of the most compelling and conflicted characters in Sony Pictures’ Universe of Marvel Characters.

The story goes that Dr Morbius is “dangerously ill with a rare blood disorder” and, determined to save others suffering the same fate, tries to save his life. It doesn’t work out and he starts stalking the streets at night as a vampire. Yes, he’s a Greek biochemist-turned-bloodsucker.

Sony’s US release across 4200 cinemas promises big box office returns for this darker Marvel, eyeing off a projected $US50 million ($66 million) on opening.

This is the third instalment in the Fantastic Beasts film series and the 11th overall in the Wizarding World franchise.

The film picks up where The Crimes of Grindelwald left us in 2018 and its biggest stars are back, including Johnny Depp, who many say is exceptional.

The tried-and-true bank robbery movie is back with a twist. War veteran Will Sharp, played by Yahya Abdul-Mateen II (Matrix, Candyman), asks for help from his adopted career criminal brother Jake Gyllenhaal (Zodiac, Spider-Man) to rob an LA bank of $32 million. It’s all for a good cause: to pay the medical bills for Sharp’s (Abdul-Mateen’s) wife.

But of course it goes wrong. LAPD is on the money as they chase down the pair’s hijacked ambulance. There’s hostages, insanely long high pursuits and an escape plan, Hollywood style.

This is where we catch up with Brad Pitt (Once Upon a Time in Hollywood, Inglorious Basterds), who has a cameo at the pointy end of this action comedy starring Sandra Bullock and Chanting Tatum.

It’s a bit like Romancing the Stone meets Raiders of the Lost Ark, and does a fair job at ticking the entertainment box (a good school holiday flick).

When Bullock, who plays romance novelist Loretta Sage, gets asked to find the lost city and gets kidnapped by an eccentric billionaire (Daniel Radcliffe), Tatum rescues her. It doesn’t quite go to plan, of course, so enter stage left a long-haired muscled-up Pitt.

The film’s co-directors and co-writers Adam and Aaron Nee tell EW that they wrote the scene to milk all the time they could with Pitt. “Once we knew we had Brad in the film, we were like, ‘We are going to soak up every minute of this guy’s time’.”

The historical thriller from visionary director Robert Eggers follows a young Viking prince on his quest to avenge his father’s murder.

When the trailer was first released, fans were obsessing over Kidman’s wig. She is joined by an all-star cast that includes Alexander Skarsgård, Ethan Hawke, Willem Dafoe, Anya Taylor-Joy and yes, Björk.

Where do you start in trying to explain how, and why, Academy Award- winning iconic actor Nicolas Cage is taking on the role of a lifetime – playing himself – in this hilarious action comedy?

Only Cage (with a mixed catalogue of movies spanning four decades), can pull this one off, as the official synopsis reads: “Creatively unfulfilled and facing financial ruin, the fictionalised version of Nicolas Cage must accept a $US1m offer to attend the birthday of a super fan [bad guy]”.

“When things take a wildly dangerous turn, Cage is forced to live up to his own legend, channelling his most iconic and beloved on-screen characters in order to save himself and his loved ones.”

To book-end with another royal movie, this is a sequel to the 2019 feature film Downton Abbey in which the Crawley family and Downton staff received a royal visit from the King and Queen of England.

The original cast of Maggie Smith, Imelda Staunton, Hugh Bonneville and Michelle Dockery return for the second film along with some newcomers.

And while the storyline once again gets us hooked, it’s the styling, costumes and settings which will once again capture our attention.