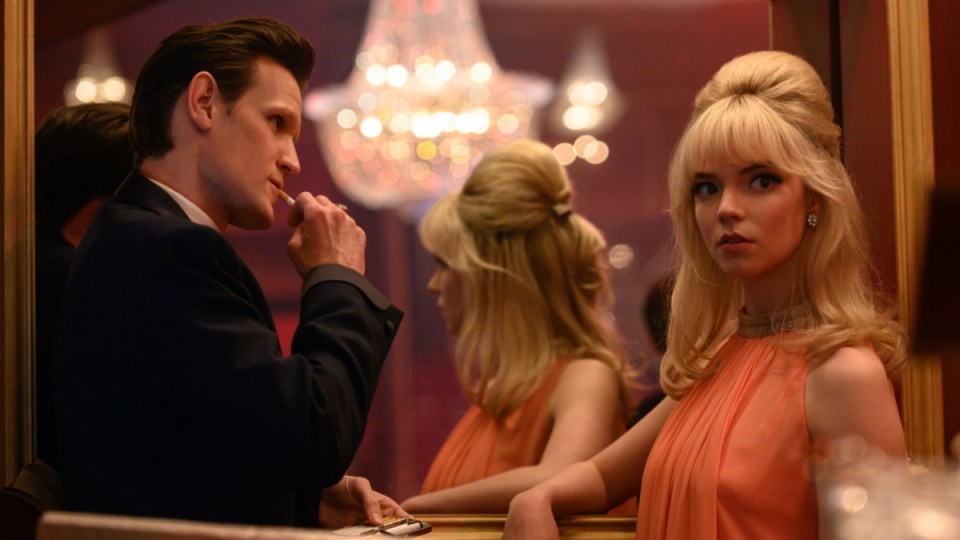 Back to the '60s: Matt Smith as the suave manager Jack and Anya Taylor-Joy as Sandie in Last Night in Soho. Photo: Focus Features

This music-drenched, neon thriller takes us back to the ‘Swinging London’ of the ’60s, reminding us of the uncomplicated pleasures of pop songs like Petula Clark’s Downtown and Cilla Black’s You’re My World.

Here, lead character Eloise (Thomasin McKenzie from Leave No Trace) has been raised by her grandmother (’60s star Rita Tushingham, in a nice touch) to adore these old records, and playing them transports her to another time and place.

After moving to London as a fashion student, Eloise rents a room in an old building in inner-city Soho, where her inclination towards the supernatural – she is comforted by the ghost of her mother, who died at a young age in London – goes into overdrive.

At night, and in a piece of very adept cinematic virtuosity, she transforms into a young woman from the 1960s, Sandie Collins (Anya Taylor-Joy), and almost becomes her while also standing apart and observing what happens.

Sandie dances and sings and wants to be a star, hitching her fortunes to a suave, womanising manager (Matt Smith) who plays on her ambition.

Eloise follows Sandie into the pseudo-glamorous underbelly of the nightclubs of Soho whose seediness soon makes itself evident. At night she dreams, while by day she draws what she saw, creating a fashion line inspired by the time.

If only things had stopped there, although where would be the fun in that?

Here again, music is the key, but as Eloise’s dreams become more gothic and blood-soaked, it is harder to keep everything separate and her haunted imaginings and reality collide.

There are some wonderful side characters, especially the mysterious older gent, played by Terence Stamp (still handsome; he used to date model Jean Shrimpton in the ’60s), who Eloise suspects knows more than he is letting on. And in the last role before her death a year ago is Diana Rigg, once a Bond girl, who is the landlady of the Soho building where Eloise stays.

It looks and sounds terrific and Anya Taylor-Joy is a delight as the mercurial performer, singing a whispery and unaccompanied version of Downtown that is a show-stopper on every level.

However, the script is very uneven and by the end, the story and character lines are barely in touch. Enjoy it for what is it, but it is worth remembering that as well as Baby Driver, Edgar Wright also made Shaun of the Dead.

Last Night in Soho is in cinemas across Australia now.

The review first appeared in InDaily. Read the original here.