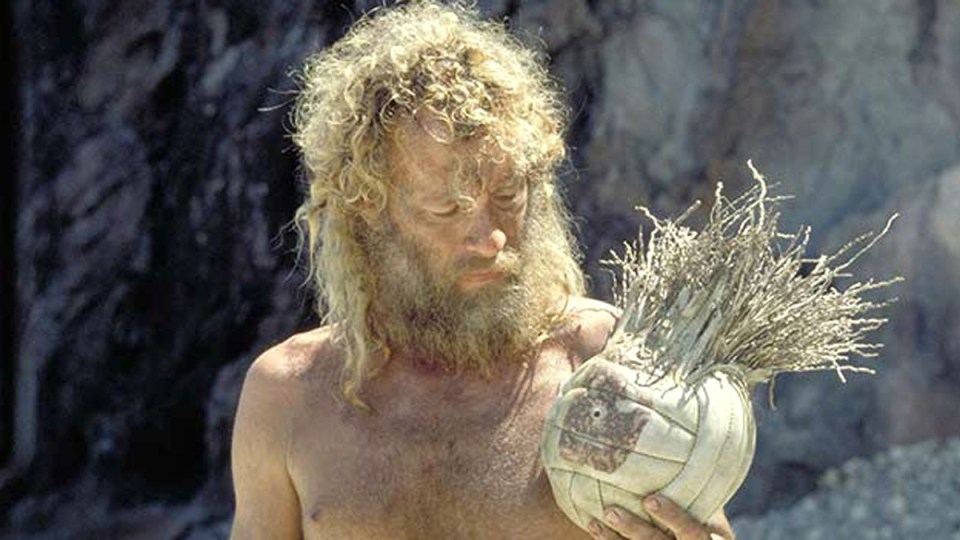 Hanks and one of his Wilson co-stars in conversation in 2000's Cast Away.

A “heavily distressed” volleyball that was an unlikely co-star with Tom Hanks in the film Cast Away has sold at auction for an eye-popping £230,000 ($A422,000).

In the 2000 film, Hanks plays the lone survivor stuck on a deserted island with the ball, which his character names Wilson, as his only friend.

Throughout the movie, Hanks talks to Wilson as a way of keeping his sanity while also trying to stay alive.

Hanks was nominated for an Oscar for his performance, but the coveted statue went instead to Russell Crowe for Gladiator.

There was no nomination for Wilson. Prop Store, the British auction house that sold it on Wednesday (British time), said the ball was originally made to look dirty – and then spent plenty of time in the water during filming.

It was one of many made for the movie, with another reportedly selling only last week for a comparative bargain.

It also has a “dark brown-and-red ‘face’ on the front,” and “the top is torn open, and an array of tobacco stalks are inserted to replicate the appearance of hair”.

Prop House is also selling another 1100 pieces of movie memorabilia this week, including the outfit worn by Will Ferrell in the 2003 film Elf and Michael J. Fox’s hoverboard from the second Back to the Future flick.

Tom Hanks’ Cast Away volleyball sells for $400,000 at auction