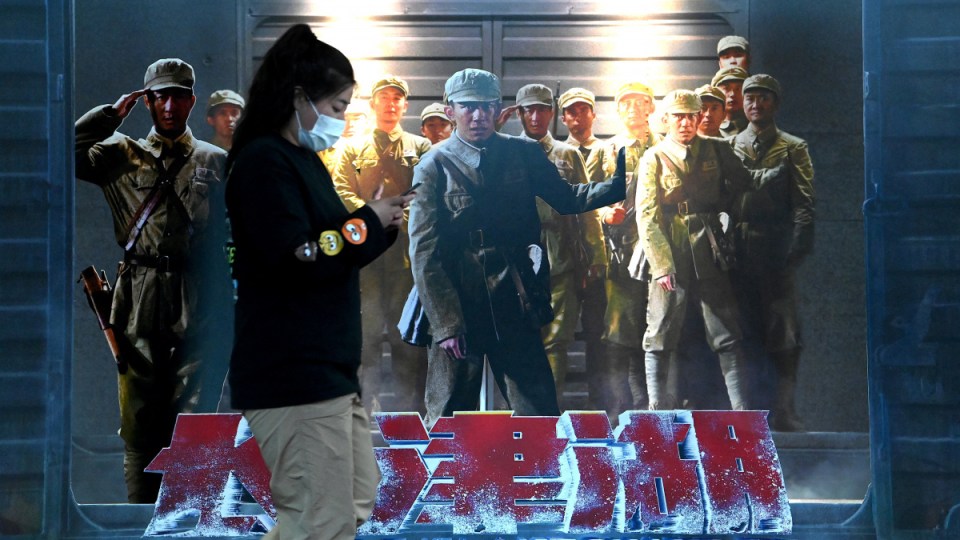 The Battle at Lake Changjin is set to become the highest-grossing film of 2021. Photo: Getty

If you’re one of many Australians re-emerging from COVID-19 restrictions, you’ve probably already streamed the newest and greatest content available online.

But as Australians prepare to reintroduce themselves to cinema and box-office films like James Bond’s No Time to Die and Shang-Chi, there’s one major title never coming to Aussie shores.

The movie, The Battle at Lake Changjin, is a reimagined film of the Korean War in the 1950s, focused on a story of Chinese soldiers defeating US troops, against all odds.

It is currently the second highest-grossing film in the world for 2021.

And in less than three weeks since its release, it has scored more than $US740 million at the box office.

In comparison, the newest Bond film, which opened to an international box office on September 28, has made $US447 million worldwide.

But you will be hard pressed to find this underdog story being screened in any country outside China.

The film, commissioned by the Chinese Communist Party, is a nationalist propaganda film with a Hollywood-size budget, and is about to become China’s highest-grossing film ever.

Set during an integral battle between the US-led UN forces and the Chinese military supporting North Korea, the three-hour epic follows the ‘War to Resist American Aggression and Aid Korea’, celebrating the Communist Party’s rise in an action film.

It had a budget of reportedly more than $US200 million and included 70,000 extras to tell the reimagined event.

The Battle at Lake Changjin was released on September 30 to commence China’s National Day and the party’s 100th anniversary.

The film broke $US667 million in ticket sales in two weeks.

Nearly 200,000 Chinese soldiers died during the Korean war, including 4000 who froze to death at Lake Changjin.

It is understood by the BBC propaganda films are often mandatory viewing for China’s Communist Party supporters.

Chinese films make up the top four of the five highest-grossing films in 2021, with Hi, Mom – released on February 12 – drawing $US848 million to take top honours.

Currently, No Time to Die‘s takings of more than $US447 million ranks it as sixth on the list of highest-grossing films of this year.

The release of Daniel Craig’s last rendition as Britain’s famous spy was delayed in Australia until November 11, after New South Wales and Victorian restrictions complicated its initial release.

Shang-Chi and the Legend of the Ten Rings, available in Australian cinemas, has earned more than $US414 million since its September 3 release. It is the seventh highest-grossing film of 2021.

Black Widow, Free Guy, and A Quiet Place Part II round out the top 10.