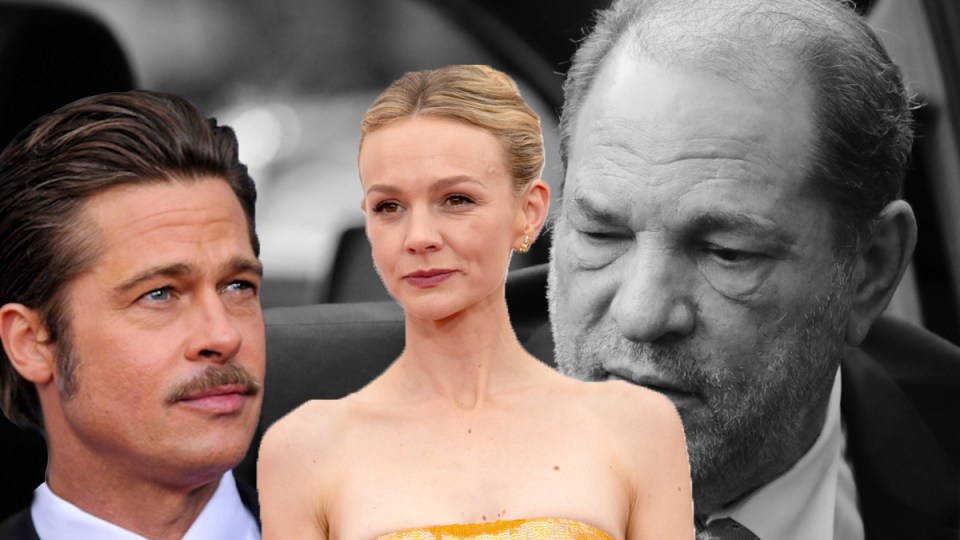 Brad Pitt and Carey Mulligan are on board for a new movie project outlining the Harvey Weinstein scandal. Photo: TND

A new movie is in the works chronicling the lead up to, and aftermath of the culturally metamorphic Harvey Weinstein sex scandal – and it features some of your favourites.

She Said, named after Twohey and Kantor’s best-selling book, is expected to follow films like Spotlight and All the President’s Men by focusing on the investigative journalists behind the bombshell revelations.

The project is being produced by Universal Pictures, and has a powerful female team behind it.

Mulligan is coming fresh off the back of her Oscar nomination for blistering rape revenge film, Promising Young Woman.

The film will be helmed by Emmy Award-winning director Maria Schrader (Unorthodox) and written by Oscar-winning screenwriter Rebecca Lenkiewicz.

There have been several Weinstein-inspired films, TV shows and documentaries, like The Assistant, The Morning Show and Nicole Kidman and Margot Robbie-led film Bombshell.

She Said, however, is the biggest dramatised take on the scandal so far and is expected to be the most truthful.

The disgraced movie mogul was arrested and charged with rape in New York in May 2018, following highly publicised outrage over the silence, complicity and coverups in the film industry.

Weinstein was found guilty of two felonies in February 2020, and is serving 23 years in prison at Wende Correctional Facility in New York.

In addition to being empowering for Weinstein’s victims and sexual assault survivors everywhere, the film will also be an opportunity for actor Brad Pitt to take a final swipe at the convicted rapist.

Pitt his money where his mouth is

One of the more upsetting elements of the Weinstein scandal was the number of successful celebrities who came out of the woodwork with their stories of feeling powerless against the wealthy 69-year-old.

But Pitt was one of the few stars who took action against Weinstein’s consistent sexual harassment of the women he worked with.

At the 1995 Broadway opening of Hamlet, Pitt confronted Weinstein after learning the film producer had been targeting his then girlfriend, Gwyneth Paltrow.

“If you ever make her feel uncomfortable again, I’ll kill you,” Pitt told Weinstein.

“At that moment, I was just a boy from the Ozarks on the playground and that’s how we confronted things,” he later said, relaying the incident to CNN in 2018.

“I just wanted to make sure nothing was going to happen further, because Paltrow was going to do two [more] films [with Weinstein].

“I think the interesting thing is that we, Hollywood specifically, but the workplace, men and women’s dynamics is being recalibrated, recalibrated in a very good way that is long overdue. And I do think that’s an important story to tell.”

More than two and a half decades after the incident, Pitt has signed on to produce She Said.

Disease concern for survivors of Afghanistan earthquake
Steve Smith confirmed as starter for first Test against Sri Lanka
Matildas will be keen to forget 7-0 drubbing by Spain
Upcoming stats will reveal where and how hard rates are hitting economy
Victorian MPs pocket a tidy 2.75 per cent pay raise
Reserve Bank review isn’t a ‘get the governor’ exercise: Jim Chalmers
Surprise Meghan and Harry details emerge after birth of daughter Lili in US
Today's Stories