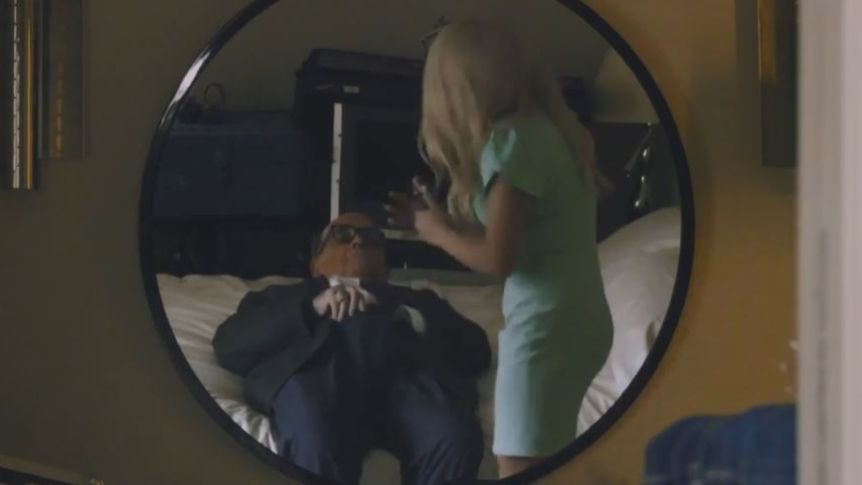 A scene from Borat Subsequent Moviefilm, showing Rudy Giuliani on a bed next to the actor Maria Bakalova.

Borat actor Sacha Baron Cohen says US President Donald Trump’s personal attorney Rudy Giuliani “did what he did” after being shown in a compromising position in a hotel room with a young actress pretending to be a television journalist.

A still image of a scene from Borat Subsequent Moviefilm was released earlier this week, part of a scene where Mr Giuliani lies on a bed, tucking in his shirt with his hands down his pants.

Mr Giuliani was in the hotel room thinking he was being interviewed for television and has vehemently denied any wrongdoing, calling the scene a “complete fabrication”.

He insisted he was tucking his shirt in after taking off the recording equipment.

But in an interview with Good Morning America, Baron Cohen said it was “pretty clear” what the former New York City mayor was doing.

“I would say that if the President’s lawyer found what he did there appropriate behaviour then heaven knows what he’s done with other female journalists in hotel rooms,” he said.

“I urge everyone to watch the movie. It is what it is, he did what he did and make your own mind up.

“It was pretty clear to us.”

Baron Cohen, who enters the scene in an outlandish outfit while Mr Giuliani is lying on the bed, said he had been concerned for his co-star, Bulgarian actress Maria Bakalova.

“I was quite concerned for her during the scene,” Baron Cohen said.

“We’d built a hideaway that I was hiding in during the entire scene, so I was monitoring it by text.

“But it’s my responsibility as a producer as well to ensure that the lead actor is looked after.”

In the same interview, Bakalova said she never felt in danger during the scene.

“I’ve always felt safe with our team, with our crew, with Sacha in our corner. I never felt that I was in danger, that’s why I am lucky,” she said.

Mr Trump says he thinks Baron Cohen is “a creep.”

Mr Trump told reporters aboard Air Force One on Friday night that he didn’t know what happened with Mr Giuliani.

“But, you know, years ago he tried to scam me,” Mr Trump said of Baron Cohen.

Mr Trump appeared briefly on HBO’s Da Ali G Show in 2003, but walked away from an interview with Baron Cohen’s Ali G character after just a minute.

“What was an innocent sexy time encounter between a consenting man and my 15-year-old daughter has been turned into something disgusting by fake news media,” he says.

“I warn you, anyone else try this and Rudolph will not hesitate to reach into his legal brief and whip out his subpoenas.”

It was ‘pretty clear’ what Rudy Giuliani was doing in movie scene, says Sacha Baron Cohen