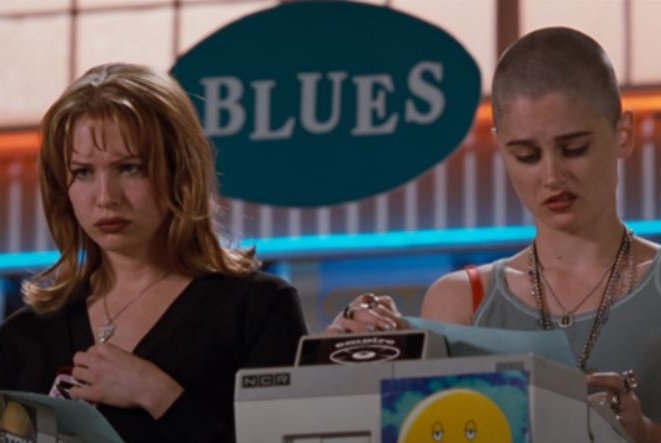 If you grew up in the 1990s, you might be familiar with Empire Records.

The film, which followed a raggedy crowd of employees at an independent record store facing a corporate takeover, resonated with those of us who listened to “alternative music” and wanted to telegraph our displeasure at The Man.

“It was a very cool thing,” Jenna Guillaume, a pop culture writer and the author of two works of young adult fiction, told me when we spoke about Empire Records, which was released 25 years ago.

“The characters were outsiders and you were an outsider if you loved it and that became a token of your cool status.”

But the film was a disaster.

Hello, people who were teens in the 90s — did you ever see Empire Records *at a cinema* in Australia? Would love to know if it screened here/if you saw it. pic.twitter.com/ZoEUsSGKHs

It was abandoned by its studio just weeks before its release.

While it gave early platforms to Liv Tyler and Renee Zellweger, critics mostly dumped on it and it barely made it to US screens, let alone Australian ones.

So, what happened, and why do people still care?

Only in the past five years did Carol Heikkinen realise the movie had achieved cult status.

“Everything I have really learned about the fanbase I have learned from Twitter or Instagram,” Heikkinen, who wrote the screenplay for the 1995 film, tells the ABC.

Speaking from Los Angeles, she says she’s not sure why what was supposed to be a wide cinema release got pulled back to a two-week run on very few US screens.

She suspects it came down to negative test screenings.

That includes the people who celebrate Rex Manning Day.

In the world of the film, Rex Manning is the heart-throb singer who stops by for an in-store promotional appearance.

When the extended DVD version of the film was released in the 2000s, fans noticed a poster for Manning’s visit listed the date as April 8.

Now, each year, fans on rally around the iconography of Rex Manning – puffy white shirt, tight leather pants – and share their love for a sometimes-hokey ’90s film about friendship and staying true to your beliefs.

The real story behind Lucas

At beginning of the film, Lucas, after discovering the imminent sale of Empire Records, takes $9000 from his boss Joe’s desk and goes to Las Vegas in a misguided attempt to save the day.

Lucas’s theft was inspired by a story Heikkinen heard while working at Tower Records in her home town of Phoenix, Arizona.

“And the interesting part of it to me was he came back to the store,” Heikkinen says of the real employee.

“And he did not get arrested. I think he did get fired, but they made arrangements for him to pay it back without getting arrested.”

While that was the spark for the story, in a few key ways what made it on screen was different to Heikkinen’s script, which she wrote on spec and sold within a week.

For starters, there was also no threat of corporate takeover, a storyline that felt wedded to the ’90s, when anti-corporatisation was the guiding principle of alternative culture.

“Lucas sat on the couch all day and at the end of the day he sort of made plans with Joe to pay him back,” Heikkinen said.

“It was a much more low-key movie. It was about friendships and family and it wasn’t about ‘the Man’.”

Another change, says Heikkinen: “I never wrote a draft where Corey wanted to lose her virginity to Rex Manning.”

Corey wanted to meet him, but somewhere along the way someone decided a teen movie needed a raunchy storyline.

Hit singles but no movie to promote

When the film was released, in its very limited way, it got some fairly bad reviews, and one of which called it “a soundtrack in search of a film”.

That was almost a compliment for Mitchell Leib, a music superviser on Empire Records who put together the soundtrack.

“My job was to have hit singles and a giant soundtrack that was supposed to not only enhance the playability of the movie, but also was supposed to act as a marketing asset and launch the film,” Leib said.

And it worked, sort of.

“I had two No.1 singles, with Gin Blossoms and Edwyn Collins, before the movie opened,” Leib said. (You might remember the Edwyn Collins track by its chorus, “I’ve never known a girl like you before”.)

In the weeks leading up to the film’s opening, the boss of A&M Records, the label that would release the soundtrack, was ecstatic at the early success of those singles.

The label would be shipping three million copies to record stores, a huge number for a soundtrack.

“Three weeks before the movie is supposed to come out I get called into a marketing meeting,” Leib says.

It was bad news: The movie was dead. It would be shown on a very small number of screens for two weeks only, then go straight to VHS.

“For a guy like me, that is just about the biggest nightmare possible,” Leib says.

He had to call back the head of the record label.

“He blew his cork. He went silent. He hung up on me,” Leib recalls.

“I don’t think he ever talked to me again.”

One of many musical highlights of the film is the scene where Australian actor Anthony LaPaglia’s character Joe vents frustration via an office drumming session involving AC/DC’s If You Want Blood.

The song choice was LaPaglia’s, Leib says, and he fought for it even when the cost of licensing the song raised the ire of the film’s budget-conscious producers.

“I think they tried to throw it out and Anthony ended up talking to the producers and saying, ‘You throw that song out of the movie, you got a big problem with me’,” Leib says. (LaPaglia declined our request for an interview.)

Toward the end of the film, Zellweger’s character Gina and Berko (Coyote Shivers) perform on the roof of the store as a fundraiser.

They play Sugarhigh, an original by Shivers, a Canadian musician and actor.

But there was a problem with the opening line: “They all said she’s just another groupie slut, I said I thought you were anything but.”

“Obviously, it was going to be a PG movie, we couldn’t have the word ‘slut’,” Leib says.

“It was very challenging to have to have the conversation and to censor Coyote,” a conversation made more delicate by the fact Shivers at the time was married to Bebe Buell, Tyler’s mother.

In the end, to save the song being ditched altogether, the line was re-recorded for the film as, “They all say life’s just a bowl of cherries, but sometimes it seems like anything but”.

The one film poster that draws all the attention

While the movie bombed, the soundtrack did not.

“I think we did end up selling two million records, which is f—ing unbelievable for a movie that did $147,000 at the box office,” Leib says.

“I remember when I saw my royalty statement I was like, Holy sh-t!”

The evidence of the film’s legacy for him: When people come into his office at Disney and see the posters of the projects he has worked on lining the walls.

“They see Pretty Woman, they see Good Morning, Vietnam, they see Pirates of The Caribbean, they see Beauty and the Beast,” he says.

Guillaume says the fact the film was a failure might have helped it resonate with the audience that did find it, particularly in Australia.

“It’s the quintessential underdog story, and then the movie itself became symbolic of that because it did totally bomb,” she says.

Some movies make money, others don’t.

She is pleased it has meant something to the audience it did find, and still does so many years later.

“One thing that has been really nice to find out about is just women who, when they were in high school, in the ’90s, had it on VHS, and watched it over and over and over again.

“For some of them, that’s an important movie in their adolescence … That’s enough.”