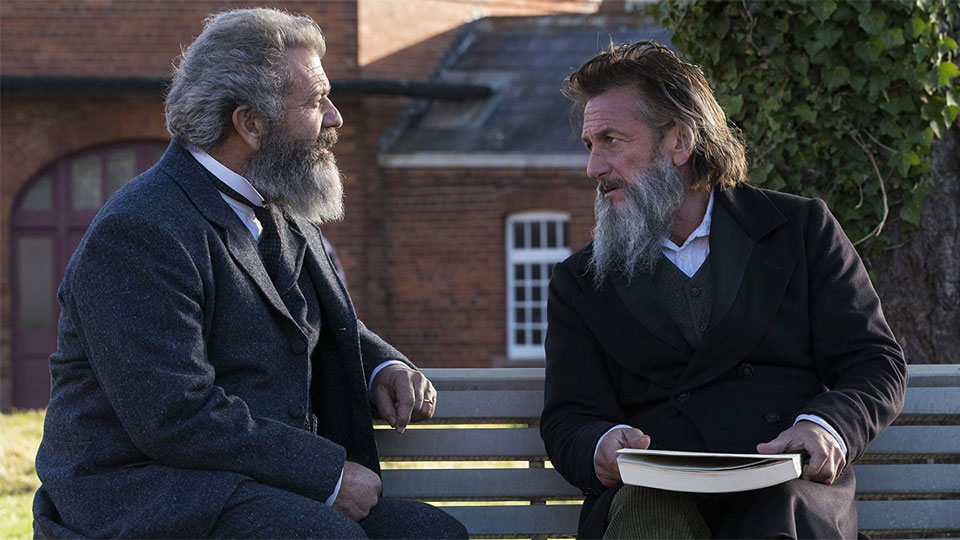 Mel GIbson and Sean Penn vie to see who is the worst actor in stinker The Professor and The Madman. Photo: Voltage Pictures

For most folks, Mel Gibson on horseback, daubed in blue warpaint rousing the Scottish clans against the marauding English army in Oscar-garlanded Braveheart is a cinematic fist-pump: “They may take our lives, but they may never take our freedom.” Yada yada.

But for many actual Scots – of which I am one – the sound of doomed hero William Wallace as played by Mad Max mangling an atrocious attempt at our (admittedly tricky) brogue is heinously embarrassing.

And that’s before you go anywhere near the film’s many, many historical inaccuracies.

Now, as if in some infernal after-effect of Brexit madness, an emboldened Gibson is at it again.

This time the controversial star plays Professor James Murray, a self-taught Scottish genius who founded the Oxford English Dictionary, in The Professor and the Madman.

A cursed production, it finished shooting in 2016 then spent an age in tortuous legal limbo as the powers that be squabbled over the final cut.

There was also the decision to film in Dublin rather than Oxford.

Subsequently disowned by writer/director Farhad Safinia (who co-wrote Apocalypto with Gibson), The Professor and the Madman is now credited to fake name PB Shemran.

Yep, it’s so bad nobody wanted their name on it.

The movie finally surfaces in Australia the same week Blake Lively bomb The Rhythm Section was pulled from release.

After five minutes listening to Gibson’s gormless re-do, Scots and anyone with a sensitive ear will wish the movie never saw the light of day.

If only his dubious tongue, infamous for anti-Semitic tirades and misogyny, was the worst thing about this woefully dull period biopic.

For a film about the silken beauty of language, Gibson and his co-stars wade through clunky, chunky dialogue that solidifies in their throats as if swallowing lead.

Safinia may as well have cited his screenplay as a sound reason to bury it.

But by far the worst offender is also-problematic actor Sean Penn.

He plays Dr William Chester Minor, a real-life American army surgeon who had a mental breakdown following the horror of the Civil War.

Possibly suffering from what we now know as PTSD, he was transferred from hospital in Washington to London, where his paranoia led to him fatally shooting an innocent man.

Incarcerated at notorious insane asylum Broadmoor, Minor’s gift for language nevertheless saw him strike up an unlikely friendship with Murray after answering a call-out to help with the emerging dictionary’s overwhelming definitions.

This should be fascinating, but mostly the movie is a turgid morass, except for Penn’s scenes.

This is no compliment. Known for bold acting decisions, Penn is wildly off chops here.

Madder than Max, he rages like Godzilla stomping downtown Tokyo or Nic Cage in just about anything.

It’s a long way from his more nuanced take on mental illness in I Am Sam and at total odds with the otherwise mothballed movie.

Be warned, drift off and you’ll be startled into popcorn loss disaster.

And for a film proudly led by two men accused of domestic violence, its disregard for their female co-stars is risible.

Game of Thrones’ Natalie Dormer gets the rawest deal in a fictional twist of alarming proportions.

Casting her as the widow of the man Minor shot, it requires her to fall for him. Actual bleurgh.

At least she gets a handful more lines than Jennifer Ehle (Pride and Prejudice) as Murray’s long-suffering wife.

In a film edited so poorly you often have no idea what’s going on, she hilariously contradicts herself at a rate that would embarrass even our government.

Save your dollars and read the Oxford English Dictionary instead. It’s way more entertaining.

Mel Gibson has just made his worst ever movie: The Professor and The Madman