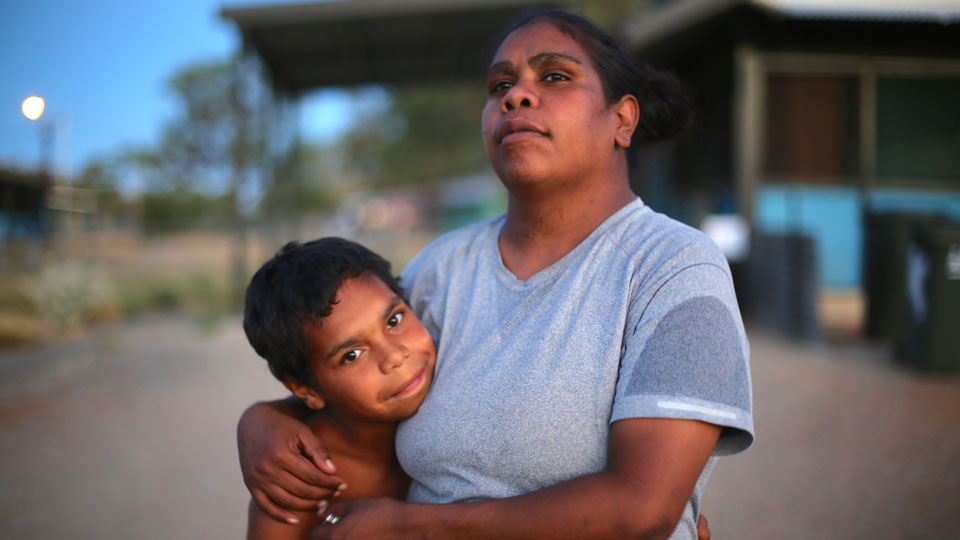 Dujuan Hoosan (with mother Megan) is the star of Maya Newell's new documentary In My Blood It Runs. Photo: Maya Newell

Maya Newell isn’t the sort of documentary filmmaker to parachute into the lives of her subjects, then vanish the second shooting wraps.

In it for the long haul, her movies are equal parts intimate storytelling and clarion-call activism.

Deeply personal for Newell, who has two lesbian mums, it shares some DNA with her latest offering, In My Blood It Runs.

The film is focused on Arrernte boy Dujuan Hoosan.

It details his struggle reconciling his proud Aboriginal identity with inflexible, Western-centric schooling in Alice Springs.

“I understood how important it was to represent a community in the right way,” an impassioned Newell says as we pull up a seat in the bar of Melbourne’s Cinema Nova.

“I get what it’s like to have a whole country telling you your family isn’t good enough.”

Filming took around three years, but Newell, who is not Indigenous, built up trust with elders over a decade while creating short films for the Arrente community.

Dujuan captivated her when they first met.

“He was this exuberant, witty, intelligent 10-year-old just at the cusp of becoming cognisant of the more complex issues many First Nations families experience around the country,” she recalls.

“He had this poeticism and wisdom, and I just thought, ‘What an amazing conduit to a world many Australians don’t really understand’.”

Two schoolroom scenes in the doco are shocking.

One sees Dujuan stare disbelievingly as a teacher recounts a staggeringly rose-tinted view of Captain Cook from a 1950s textbook.

Another teacher pauses while reading about the Dreaming and nervously giggles, saying she doesn’t understand what it’s all about.

“These are some of the most progressive schools in Alice Springs that do so much to support First Nations access to education, but teachers need the support and the resourcing to be able to make their classrooms culturally appropriate,” Newell offers diplomatically.

“These are kids who speak two or three Indigenous languages, are confident hunters, who know bush medicine, and then they go into the mainstream Western education system and feel like failures.”

With a powerful matriarchal family of activists surrounding him, you can see why Dujuan rails against the system.

As his great-grandmother MK Turner – a celebrated artist, author and educator awarded the Medal of the Order of Australia in 1997 – put it to Newell, “They’re always telling us to make our children ready for school, but when are they going to make schools ready for our children?”

In My Blood It Runs is attached to a campaign led by First Nations educators calling for a parallel, Indigenous-led education system similar to those in New Zealand and some parts of the US and Canada.

A series of Q&A screenings around the country takes in a trip to federal Parliament on February 25, pushing for change.

“Under the UN declaration of Indigenous rights, kids have the right to education through their own language and culture,” Newell says.

“Every child in Australia from an English-speaking background gets that.

“Too many First Nations children are put in the too-hard basket, labelled ratbags or troublemakers.

“But actually there are beautiful, vibrant children who will blossom if we can make space in our systems to respect their identities.”

Dujuan became the youngest person to address the Human Rights Council at the United Nations in Geneva in September.

He and his family also attended the world premiere of In My Blood It Runs at Toronto’s Hot Docs International Documentary Festival to rapturous applause.

“Aboriginal people have been saying they have the answers for centuries. We just actually need to sit back and listen to them,” Newell says.

Dujuan’s mother Megan Hoosan agrees, conveying her hopes for the future at a screening held in their community.

“She said, ‘I just want Australia to know that we love and care about our kids’. And it’s crazy to me that she needs to articulate that,” Newell sighs.

“She spoke about how hard it is to be an Aboriginal parent when television news and social media consistently tell you your parenting isn’t good enough.

“We hung policies of child removal and intervention on this grand lie, but the film really shows that untold story of the love, care and strength of Aboriginal families.”

In My Blood It Runs is in cinemas February 20. For a full list of Q&A screenings or to find out more about how you can support the campaign, click here

In My Blood It Runs explores childhood, culture and the value of listening to elders