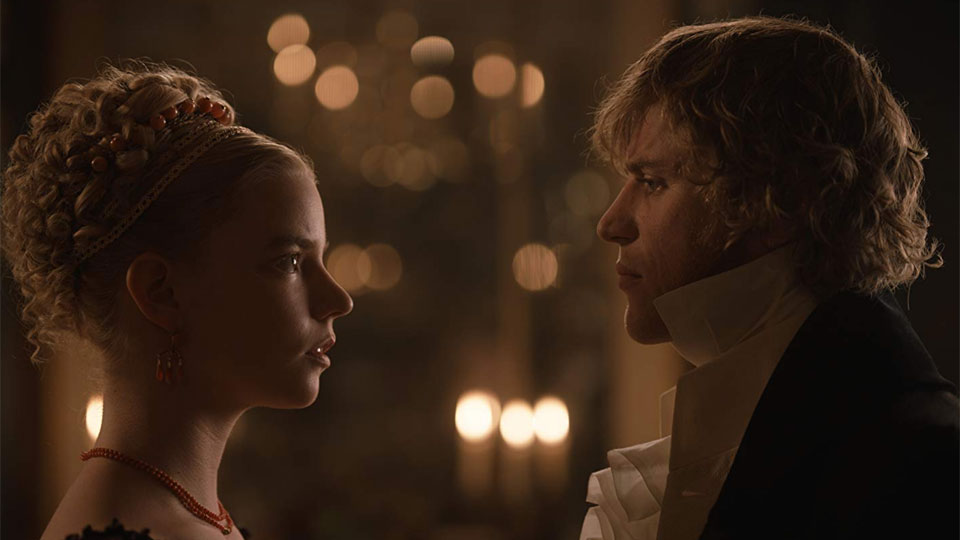 Audiences will be over the moon within the first few minutes of this new adaptation of Jane Austen’s period comedy Emma, simply because they have been, well, mooned.

Lead actor and musician Johnny Flynn strips to his gloriously sweaty nude self after striding into his English country manor following a vigorous walk.

Soon after Anya Taylor-Joy, who plays title character Emma Woodhouse, lifts her skirts to warm her tush against the fire in a rather unladylike manner.

It’s a hint that debut director Autumn de Wilde is prepared to be cheeky with Austen’s 205-year-old rom com, but that’s as far as it strays out of bounds.

Sure, there’s also a little kissing (no tongues, of course) and while it is fun and fresh, on the whole de Wilde has delivered a very old-fashioned dedication.

That may be surprising considering de Wilde, an American, is most famous as a music photographer and filmmaker.

After appearances in The Witch and Split, Taylor-Joy successfully shakes off her ‘scream queen’ moniker as Emma, a privileged, spoiled 20-year-old heiress who lives with her father in the small English village of Highbury in the early 1800s.

Swelled with self-satisfaction after successfully matchmaking her governess (Gentleman Jack’s Gemma Whelan) with a wealthy widower (Rupert Graves), Emma pledges to use her powerful social standing to play Cupid within her small circle.

This quest centres mainly on Harriet Smith, an impressionable young woman with a consistent bunny-in-the-headlights demeanour played with adorable aplomb by Mia Goth.

When Emma persuades Harriet to refuse the equally adorable farmer Mr Martin’s offer of marriage in favour of a pursuing the theatrical but vacuous vicar Mr Elton (who offers a higher social standing), she sets in motion a comedy of romantic errors, unrequited crushes and heartbreak before the inevitable heartwarming happy endings.

Emma is a meddler, an entitled snob.

Even Austen acknowledged readers would struggle to relate to her, saying she ”is a character who no one but myself will much like”.

Emma’s mischief is rooted in the strict hierarchy of society at the time – women without fortune, education or birthright must marry well, as they are not allowed professions or inheritances.

Taylor-Joy brings her game face to the title role, at once haughty, beautiful, clever but ultimately susceptible to the seduction of romance by love-interest-who-lives-next-door George Knightley (Flynn.)

Segmented into four seasons, Emma is a slow burn, and in this vein de Wilde has stayed lovingly true to Austen’s world – there is no instant gratification when it comes to love. There is no swiping right.

A lingering touch during the ball as Knightley and Emma dance is electric. Trust me.

Of course, there are myriad LOL moments in Emma.

Bill Nighy, as the hypochondriac Mr Woodhouse, is a perfect foil for the romantic drama unfolding around him. That man can raise a laugh with one eyebrow.

The absolute scene stealer, however, is comedian Miranda Hart as the well-meaning but irritatingly loquacious Miss Bates.

Whether it’s a comical dash around the haberdashery earnestly chasing Emma for some attention or incessant chattering through an obviously awkward tea date, she’s pure gold.

Hart is also key in the most shocking scene in the film, where Emma takes a lesson from the Mean Girls playbook and is unnecessarily cruel to Miss Bates at a picnic.

It’s a powerful and cathartic moment for Emma, who finally realises her behaviour really does have consequences.

A tip for modern girls? No one likes a rude mole, no matter how rich and popular you are.

It would be simplistic to say that Emma is a film aimed solely at romantics.

But it will pull on your heartstrings while it tickles your funny bone.