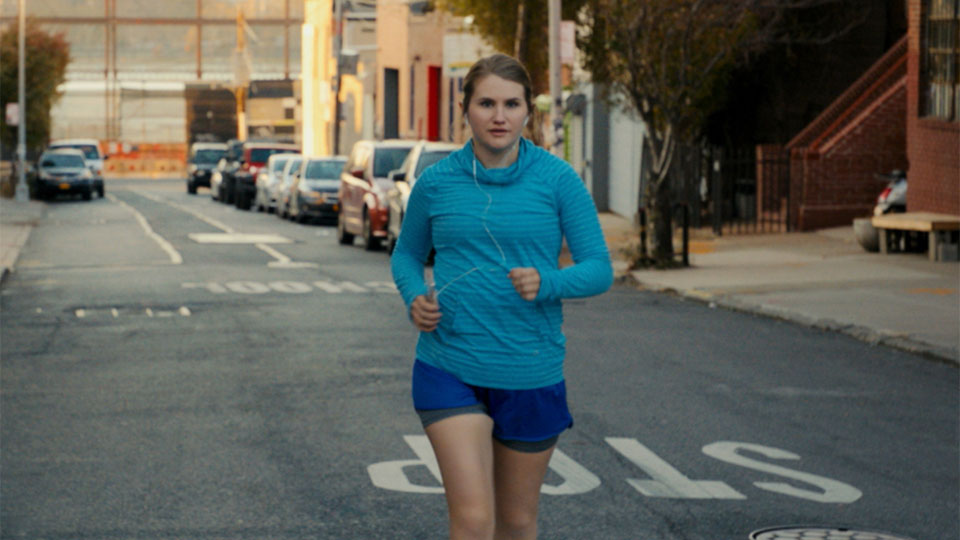 Life’s all about balance. That’s why it’s cute when a pizza gets ordered halfway through a boisterous interview with Paul Downs Colaizzo, the writer/director of New York comedy Brittany Runs a Marathon, and his breakout star Jillian Bell.

On the surface of things, the perky Sundance Film festival Audience Award-winner is an empowering tale about embracing healthy living.

Bell plays Brittany, an almost-30, hard-partying woman whose habits are self-deprecation in silly British accents, and consuming shots and ice cream. They’re her way of trying to ignore a niggling feeling she’s not good enough to be happy.

After a confronting doctor’s appointment, Brittany falls into running to take control of her life. But it’s far from a judgmental body-beautiful manifesto.

That’s why I chuckle when Colaizzo orders that post-lunch pizza.

Lounging in a leather armchair at Melbourne’s Olsen Hotel, he interrupts Bell during an earnest musing on personal growth.

“Two chicken skewers at lunch wasn’t enough,” he says. “I agree,” she retorts. “I was looking at your lunch and thinking, ‘Man!’.”

Brittany Runs a Marathon is inspired by the life-changing challenge taken up by Colaizzo’s former Upper West Side flatmate Brittany O’Neill.

They met at college and, like the movie Brittany, her theatre aspirations were tanking. Drinking too much and gaining weight, she decided to run the New York Marathon. Sharing her physical and emotional struggles inspired him to jot down ideas for a screenplay.

The first question the newly-obsessed runner asked about her fictional counterpart was, “How fast does she do it in?”

Just as the movie keeps you guessing whether Brittany will make it to the finish line, Colaizzo wasn’t sure his film would get off the ground.

It wasn’t until the rapid 28-day shoot that it felt real. O’Neill visited the set and bonded with Bell over the unrealistic expectations women contend with.

“We see images all the time showing us how we can lose weight, fix our aging faces and wear the thing that sucks us into an outfit and makes us look attractive,” the star says.

“It’s so nice to talk to someone who has been through all of those things, and now we’re trying to both forge through on the other side.”

A former Saturday Night Live writer, Bell has a background in improv but didn’t go off-the-cuff with Colaizzo’s script.

“It was helpful to me to not rely on that, because it’s a sort of a safety zone that lets me drop my shoulders and relax,” she says.

“I don’t think Brittany is totally relaxed. It was important for me to go through that change as much as I could, and with that comes being uncomfortable.”

“It was life-changing, and not just because my body was changing, but my thoughts were too. I was evolving in a great way, thanks to Paul’s beautiful script.”

As funny as the film is, with cute rom-com moments between Bell and The Mindy Project star Utkarsh Ambudkar, it continually pushes back against the beauty expectation.

“There were raw, unfortunate truths that come with a woman whose body changes,” Colaizzo says.

“We needed to confront that and keep this entertaining, but also challenge the audience so we could find hope in truth, not in a lie.”

Bonding with Bell, O’Neill loves this big-hearted movie. “She just loves that audiences are inspired by a thing that was inspired by her,” Colaizzo says.

“We’re all proud of the message that’s been put into the world, and that it resonates.”

Bell agrees: “Brittany and I did an interview in Los Angeles together right before the movie came out and it was like I was talking to myself.

“We had such similar experiences about how it really is a journey, loving yourself. Figuring out how to be not just okay with who you are, but really happy and excited.

“And it’s not just about the goals accomplished. It’s about believing, overall, you’re a pretty good human.”

Brittany Runs a Marathon is in cinemas now.