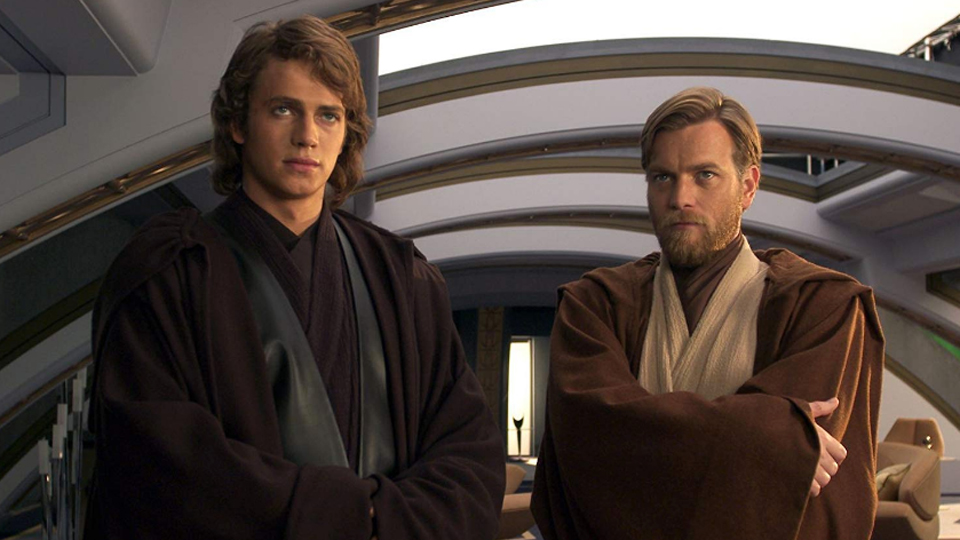 The way they were: Hayden Christensen and Ewan McGregor in Star Wars: Episode III – Revenge of the Sith. Photo: Lucasfilm

In late October The Hollywood Reporter published an essay arguing that Star Wars: The Rise of Skywalker should feature the return of Anakin Skywalker as a way to link all nine episodes – no mean feat given Anakin was killed and his body incinerated in Episode VI.

But an incorporeal Anakin wouldn’t be the first dead Jedi to return as a Force Ghost: Indeed, his corpse was scarcely cold before he made a spectral cameo at the end of Return of the Jedi.

The entertainment site’s argument for resurrecting Anakin assumes that millennials’ first contact with Star Wars was the prequels, so they don’t feel the same hostility as Boomers and Gen X to Anakin (and the actors who played him) as those nurtured on the original trilogy.

From my experience, there’s merit to this argument.

My son was born shortly after the release of The Phantom Menace.

He watched the prequels as relentlessly as he did Harry Potter, had a collection of prequel action figures, made me re-enact the ‘Duel of the Fates’ between Darth Maul, Qui-Gon Jinn and Obi-Wan Kenobi until I tore a rotator cuff, and once walked around Disney World for an entire day dressed as Darth Maul.

His favourite, nevertheless, like the majority of devotees is Episode V: The Empire Strikes Back.

But whereas I view the prequels as tarnishing the sheen of the magic I experienced as a teenager, he sees them as a warm and reassuring part of this childhood, like a trio of odd cousins he hardly sees any more but who he used to skip around the backyard with.

We both agree on one thing: The problem with the prequels is Anakin.

Jake Lloyd, who played Anakin in Episode 1, reportedly had an unhappy time coping with the backlash from that film. Yes, his performance ain’t great, but George Lucas’s wooden script doomed him.

In Episodes II and III, however, we’re faced with an adolescent Darth Vader. There was an opportunity to cast and rely on the charisma of an actor who could project a pre-Sith Vader’s charm and menace.

Sure, he’s limited by another Lucas script that makes him deliver lines like “I don’t like sand. It’s coarse and rough and irritating and it gets everywhere.”

But in Episode IV Mark Hamill faced the same challenge (“But I was going into Tosche Station to pick up some power converters!”) yet had fun with his lines and so engaged the audience.

Christensen neither has fun with, nor fully inhabits the role of Anakin and as a result carries perhaps an unfair share of the prequels’ unflattering legacy.

To many, he’s the Sofia Coppola [of Godfather notoriety] who shipwrecked a vital instalment in a beloved series through his tortuous performance.

Maybe that’s fair. There are moments in the prequels that hint at what might have been.

In Episode I, the Duel of the Fates almost accounts for the excruciating pod race.

When Yoda wields his light sabre against Count Dooku in Episode II, it’s a truly transcendent moment and Anakin’s transition to Lord Vader in Episode III is framed convincingly.

Well, there were reasons Leonardo DiCaprio and Christian Bale turned down the Anakin role, and Lucas’s script could have been one.

But Ewan McGregor demonstrated that a cheesy script doesn’t dictate a cheesy performance if you approach it with gravity and gusto.

Wes Bentley was apparently considered before producers learned of his acute drug problem. Imagining his saturnine, menacing presence as Anakin really smacks of an opportunity lost.

But of course we’ll never know.

Lucas loves redemption arcs, particularly if they allow him to atone for his past mistakes.

Episodes II and III provided a backstory for Boba Fett, responding to how disappointed fans had been to see his character carelessly thrown away (into the Sarlacc’s maw).

So yes, give us Anakin.

Director JJ Abrams is so securely in charge of his medium with this final trilogy that I think Anakin’s return would be compelling.

And, as a Force Ghost, he wouldn’t have to fret about sand any more.

Anakin Skywalker should make a comeback in next Star Wars movie