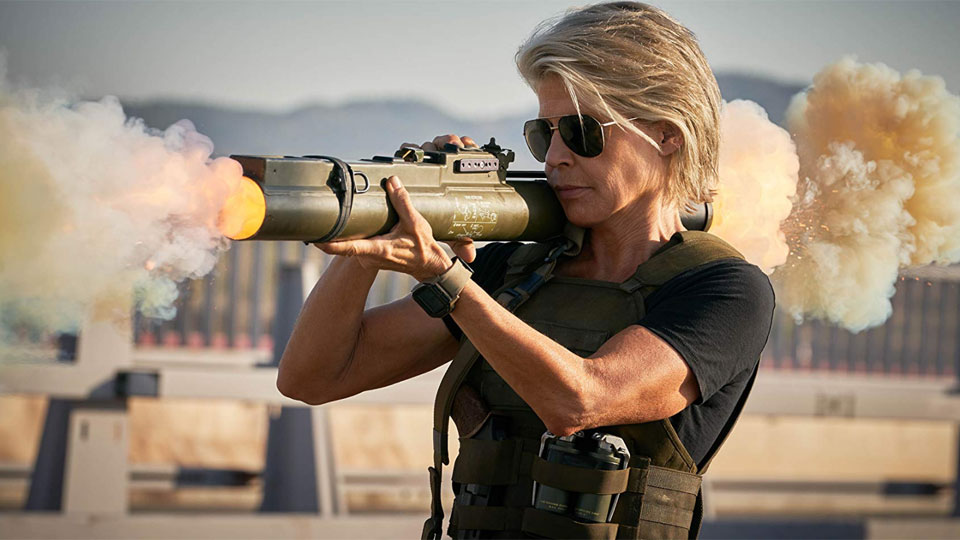 Not even Linda Hamilton can save Terminator: Dark Fate from being a bust. Photo: Paramount Pictures

I know, I know. I can hear you groan at the beaten-to-death cliché lifted from founding father James Cameron’s all-out action sequel Terminator 2: Judgment Day (1991).

Terminator: Dark Fate – the latest failed attempt to reboot Cameron’s initially genius series about genocidal artificial intelligence from the future trying to wipe out humanity in the past – is precisely that.

Don’t get me wrong, part of the joy of returning to a beloved storyline is picking up on familiar beats played just different enough to thrill. Even more so when time travel is hard-wired into the plot, allowing the base code of the future to be re-written.

But Terminator: Dark Fate is an egregious cut-and-paste job bereft of new ideas, with less life left in it than Arnold Schwarzenegger’s ageing cyborg.

Even the name feels like a focus group-mismanaged word soup.

Inexplicably, they even badly rebrand the villainous source code Skynet to the blah ‘Legion’ while failing to change its human design.

Photocopying what we’ve already seen, there’s the industrial factory fight, the frenetic motorway pursuit and the cop shop massacre – here transplanted to US Border Patrol in what feels like half-hearted political commentary designed not to offend anyone.

It even brazenly borrows a plane showdown from The Dark Knight Rises, which Goyer collaborates with Christopher Nolan on.

If there were a drinking game based on the rehashing here, it would have to come with an OH&S warning.

Again, you can get away with this. JJ Abrams hit the nostalgic stick hard on Star Wars: The Force Awakens, but that had a whole lot more heart.

And then there are the catchphrases. At this stage, they’re worn thin.

At least Dark Fate doesn’t don’t go there with hasta la vista, granted, and twice I thought it would in the weightlessly dull CGI-fest finale.

But, of course, someone will be back.

I was excited to see the return of Linda Hamilton as humanity’s ‘mother Mary’, Sarah Connor.

She’s the heart and soul of the series, and failing to secure her services for Terminator 3: Rise of the Machines (2003) was that so-so entry’s biggest mistake.

A bouffant-haired LA waitress, Connor’s life was blown apart in that most dystopian of years, 1984, when Arnie’s leather-clad, flesh-covered metallic skeleton first came back to kill her before she could give birth to her son John, a future leader of the rage against the machines.

Transforming throughout the movie from a screaming damsel in distress relying on Michael Biehn’s future soldier Kyle Reese, by Judgement Day she was a hardened warrior locked up in a psych ward but ready for the robot’s return.

Sadly Hamilton’s performance here is as leaden as Arnie’s always was, but without playing to that for terror or comic effect.

It’s probably not ideal that the movie literally opens with some of her best work, flashing back to Judgement Day as she desperately tries to warn her captors of the oncoming storm.

There is one well-done computer-aided flash forward that springs a surprising cameo and is the only moment worth watching here.

Arnie’s heart’s not in it and he’s just plain silly now.

Natalia Reyes plays a dull alternative to Hamilton’s original, although she’s nowhere near as dire as Game of Thrones’ Emilia Clarke in the franchise’s worst misfire, Terminator Genisys (2015).

So far from the spark of the original two, at this point humanity’s fate would be best served by a moratorium on any new Terminator entries.

Terminator: Dark Fate is dire and should spell the end of the franchise