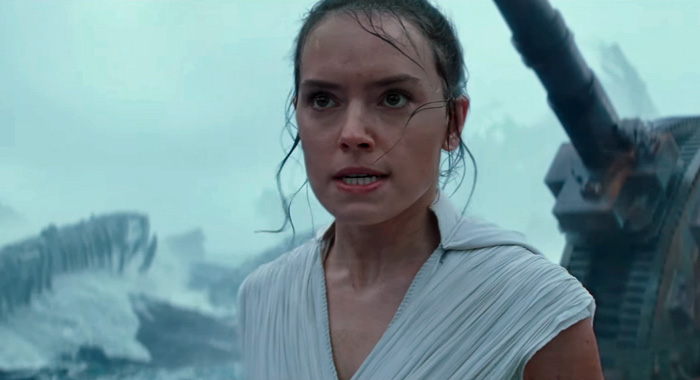 Fans are preparing for the end of the 42-year-old Star Wars saga. Photo: Disney

After 42 years, the Star Wars saga as we know it is about to come to an end and fans have had their first look at the final trailer before Star Wars: The Rise of Skywalker says goodbye to some old favourites.

The blockbuster, directed by JJ Abrams, will bring to an end the nine-part saga that began with the original Star Wars in 1977.

The eagerly awaited trailer premiered on US TV during an NFL match on Monday night, giving fans a final glimpse of the film before its December release.

The galaxy far, far away’s favourite Jedi, Luke Skywalker makes an appearance, along with Princess Leia on what would have been the late Carrie Fisher’s 63rd birthday.

Fisher was best known for playing Leia before her death in 2016 at age 60.

Abrams had previously revealed that unused footage from previous films would be used to bring back Fisher for the saga’s final instalment.

The two-minute trailer, with the tag line “The saga will end. The story lives forever”, also features British actor Daisy Ridley, who reprises her role as resistance fighter Rey.

“People keep telling me they know me,” Ridley’s Rey says in the trailer. “No one does.”

Perhaps the most poignant moment came with a hint at the ultimate fate of the ever-proper protocol droid C-3PO.

Poe Dameron (Oscar Isaac) asks the iconic droid (Anthony Daniels) – who has appeared in all of the central Star Wars films since the 1977 original – what he’s doing while standing plugged into wires being attended by small aliens.

“Taking one last look, Sir. At my friends,” C-3PO replies.

We then see a shot of a shaking R2-D2, 3PO’s droid best friend and companion throughout the series.

Who'd have thought: C3PO having the best and most meta line in the trailer. Breaking my heart. #TheRiseOfSkwalker #StarWars pic.twitter.com/ahxq0QBHhw

I am a 44-year-old man who is by no means emotionally prepared for the death of C-3PO. https://t.co/VaJLNx0uDu

C3PO IS SACRIFICING HIS MEMORY FOR THE RESISTANCE I WISH I COULD STOP CRYING pic.twitter.com/1e3JlOHYBJ

Towards the end of the trailer, a mystery figure in a black billowing hood appeared, leading fans to speculate feared villain Emperor Palpatine will make a return.

The Rise of Skywalker will complete Disney’s new Star Wars trilogy and is set to be one of the biggest entertainment events of the year.

The Rise of Skywalker will be released in Australian cinemas on December 19.

Watch the trailer final Rise of Skywalker trailer below: