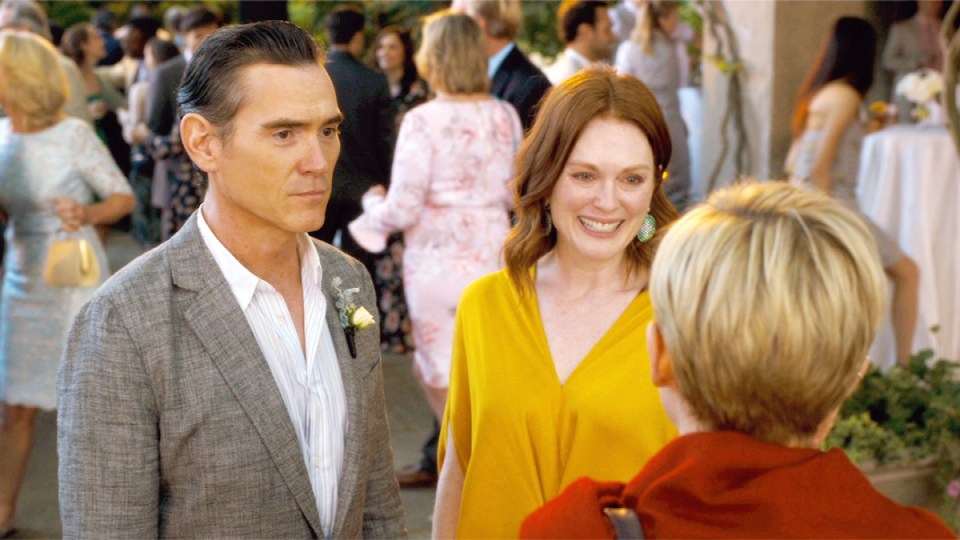 Billy Crudup stars alongside Julianne Moore in After The Wedding. Photo: Sony Pictures

Billy Crudup has worked consistently in movies for more than two decades.

Grafting in strong ensembles like Oscar-winning sexual abuse exposé Spotlight, he surrounds himself with strong women.

Speaking to me over the phone from his New York apartment, I get the impression he’s quite comfortable with this scenario.

“I confess, it’s almost like my life vest,” he said.

“I like to work on strange things that have the potential to be really wicked. That tends to lead to a high degree of potential failure, so surrounding yourself with people who are much better than you makes sense.”

He made a mark early on as a recovering addict in Canadian director Alison Maclean’s Venice Film Festival hit Jesus’ Son in 1999.

“It’s really wild, you know. That movie’s probably 10 times more popular now than it was when it came out,” he said.

“Typically when people come up to me, they think I’m maybe Russell’s grandfather.”

Chuckling at his self-deprecating modesty, I suggest he could be Russell’s dad at a push.

He laughs, “I’ve had a lot of work done. I’ve got to keep working.”

This week he appears alongside Michelle Williams and Julianne Moore in swooping melodrama After the Wedding. a gender-flipped remake of the Danish original.

After the Wedding  was adapted and directed by Moore’s husband Bart Freundlich.

When we speak, he’s just got home from lunch with Freundlich at Charles Street hotspot Mary’s Fish Camp, where he rates the famous lobster roll.

She’s in town because his entrepreneurial wife Theresa is looking to fund Isabel’s work in an Indian orphanage. Emotional earthquakes crack open.

“Not one of us misses that notion,” Crudup suggests.

“All you have to do is show up for one family holiday a year and I can guarantee you’re going to have wildly different interpretations of the shared history. It’s incredibly relatable, however this is a rather unusual circumstance.”

The tabloids had a field day when he separated from then-partner Mary-Louise Parker in 2003 to be with Claire Danes, then 24.

Parker was seven months pregnant with their son William Atticus Parker, who is now 15 and keeps dad’s ego in check.

“They do a pretty good job of putting you in your place,” Crudup said of children.

“Especially when it just appears out of thin air, when chemicals decide to be released in their body and they have all the right ideas. I’ve got a wonderful one too, and even still, watching that development is amazing.”

Crudup is rumoured to be dating Naomi Watts – I note they got on great while working on Netflix series Gypsy.

“Naomi is the perfect example of what I was saying before about hedging your bets,” he said coyly.

“She’s crushing it. That level of work ethic, her specific aesthetic in addition to her skillset, is undeniable.”

He says it’s wildly impressive she also produced the show while performing the lead role.

“I saw that recently with Jennifer Aniston and Reese Witherspoon, and with Julianne. And Naomi also has two kids. So from being a mum, to being a producer and a badass actor, just bearing witness to it made me want to take a nap.”

After The Wedding is in cinemas nationally from October 24

‘I am not afraid’: The modern unknown soldier risks it all in Ukraine
Greens sign up for Labor’s looming jobs-and-skills summit as Liberals stick with boycott
Joe Biden’s $430b green victory for the environment
China cementing its Thailand ties with joint military exercises
NRL: Titans frantic to end 10-game losing streak as Manly showdown looms
AFL: Western Bulldogs cling to finals hopes after GWS thriller
Zombieland sequel rises from the dead to eat brains and tickle funnybones
Today's Stories

Why Billy Crudup always surrounds himself with strong female actors