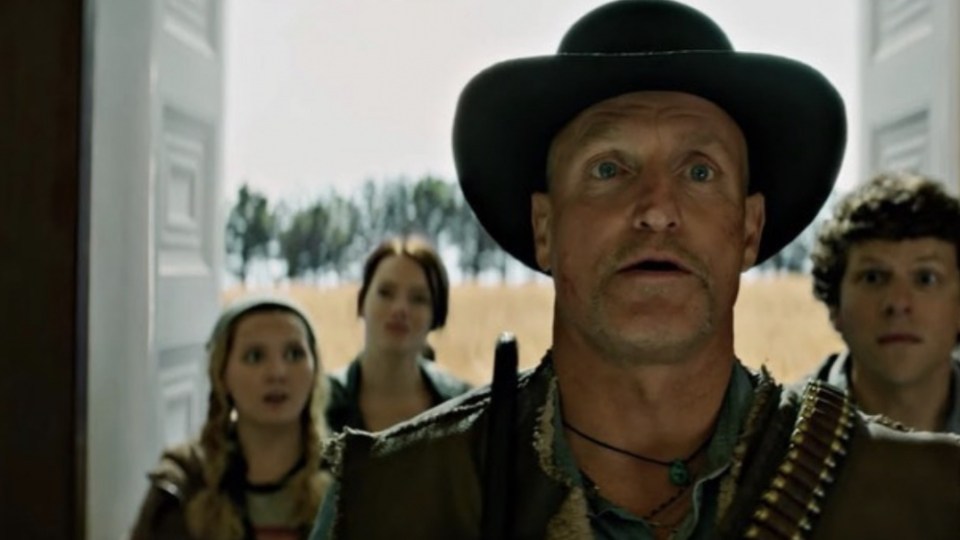 In a world of dead-boring reboots, the Zombieland sequel is refreshingly lively. Photo: Sony Pictures

Hollywood execs are so scared of taking risks these days that we’re doomed to a brainless horde of never-ending sequels and reboots of franchises that just won’t die.

Which, ironically, makes a surprise resurrection horror-comedy that tackles that rotten scenario right in the brain-mush the perfect antidote.

Zombieland: Double Tap is one of three zomedies to attack Australian shores in quick succession, including Australian charmer Little Monsters, out on Halloween.

The original Zombieland, way back in 2009, succeeded by following the Scream model: outlining genre tropes while gently poking fun at them.

The film followed Columbus (played by Jesse Eisenberg), a loner navigating a zombie-infested USA while narrating his survival rules – first up, cardio to outrun ravenous brain-eaters.

Then there were the low-key inclusions: always wear your seatbelt and watch out in bathrooms. He also insisted on the double-tap of the sequel’s title, to make sure a blown-away zombie stays down.

The nerdy and neurotic hero is reluctantly joined by a ragtag bunch of survivors – including Emma Stone’s Wichita, Woody Harrelson’s Tallahassee, and Abigail Breslin’s Little Rock and together the four attempt to cross the treacherous American wastelands.

While the uber-gore provoked giggles, no one expected a sequel.

Certainly no-one expected the return of two-time former Ghostbuster Bill Murray, yet again playing a heightened take on himself.

Yes, he was accidentally killed by Jesse Eisenberg’s zombie hunter Columbus in the original. Stay seated for the Easter egg in the end credits to find out how he’s back.

So how did a ten-year-old cult hit rise from its grave for a sequel?

That can be attributed to the voodoo magic of Zombieland writing duo Rhett Reese and Paul Wernick, who struck gold with Ryan Reynolds’ wisecracking Deadpool movies.

Smelling fresh blood, execs signed on the dotted line and brought back the seemingly-dead property for another bite of the cranium – and no one’s more surprised than the filmmakers, which is pleasingly built into Columbus’ narration.

Snappily taking potshots at its reason for existing, this time around the jokes are even zingier, firing as rapidly as the hilarious zombie kill shots.

When we return, the crew are living in the White House (the upside to the zombie apocalypse is that Donald Trump never got elected). Fiercely independent Wichita is struggling with Columbus’ co-dependence, while Little Rock is feeling smothered by Tallahassee’s adoptive-dad stance.

Too smothered – she flies the nest with a dope-smoking, sarong-wearing Bob Dylan-wannabe (Avan Jogia, Now Apocalypse). Her flit sparks a frantic search.

In a stroke of genius, Double Tap adds a movie-stealing Zoey Deutch (Infinity Jackson in Netflix hit The Politician) as Barbie-like ditz Madison.

She might not be the smartest, but she’s survived solo by living in a shopping mall freezer. And yes, she gets the Dawn of the Dead reference.

A fast-rising star, there’s an electric frisson with Stone as Madison inserts herself into the Wichita-Columbus stand-off.

But the best joke’s saved for a stand-off with Luke Wilson and Thomas Middleditch, an odd couple hunting duo with an uncanny resemblance to the Zombieland boys.

This sequel only has room for one unlikely undead maiming mentorship, but the world sure has room for this furiously funny sequel. See you in another 10 years?