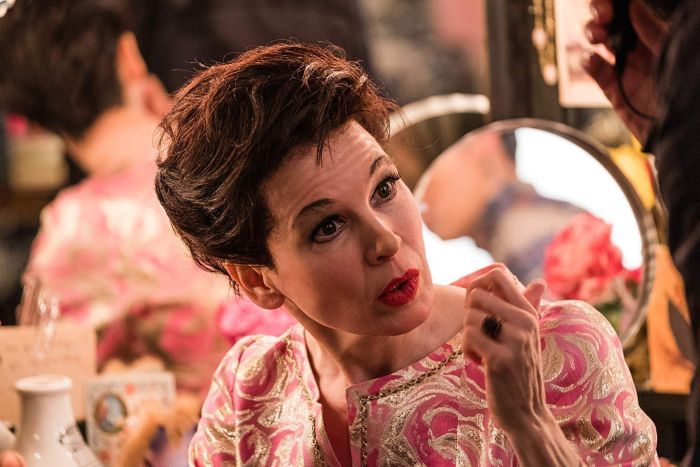 Renee Zellweger and the essence of Judy Garland combine harmoniously in the latest biopic to hit cinemas. Photo: Pathe/BBC Films

She walked the red carpet at the Australian premiere screenings of bittersweet faded glory biopic Judy, where she’s spectacular in the title role that will surely score her a Best Actress Oscar nomination.

Zellweger take on the role of the legendary singer and actor Judy Garland – born Frances Ethel Gumm at Grand Rapids, Minnestoa, in 1922 – and soared the heights of Hollywood glory before crashing back down.

The local response was a good deal warmer than the real Garland’s appearance Down Under in 1964.

She was booed off stage in Melbourne after turning up late, drunk, then struggling to hit the high notes and forgetting the iconic lyrics to Over the Rainbow.

Biopic Judy follows her debt-ridden final hurrah in London at the tail end of 1968.

Separated from her beloved (but rarely seen) children, it was only a few short months before her untimely death by accidental overdose in 1969, at the age of 47.

Director Rupert Goold works the tale from an adaptation of Peter Quilter’s stage play End of the Rainbow by The Crown writer Tom Edge.

The movie opens with a classic bait and switch.

A glimpse of the Yellow Brick Road entices us with a sugar rush hit of nostalgia, as set decorators brush leaves on the set of Garland’s 1939 breakthrough hit The Wizard of Oz.

But just like the con at the heart of the Emerald City is unveiled when the curtain is swept back, we understand that ruby red slippers ain’t going to save a young Garland’s (played by Darci Shaw) childhood.

Or, indeed, her future.

Worked to the bone and deprived of sleep, thanks to the wicked minders who constantly ply her with speedy diet pills, addiction and the need to be adored is hardwired into her.

So much surrounding her is fake. Even her staged 16th birthday party, which she was made to celebrate early – with no taste of cake.

When Garland dares to take an unscheduled dip, wetting her camera-ready hair, the wrath of sleazy studio boss Louis B Mayer (Richard Cordery) grimly echoes Harvey Weinstein. How much has changed?

A few too many of these flashbacks distract from the main attraction.

It follows a fairly standard music biopic formula, the same that saw Rocketman and Bohemian Rhapsody smash the box office, but it’s Zellweger who elevates Judy.

Far from clumsy mimicry of Meryl Streep’s Margaret Thatcher in The Iron Lady, Zellweger imbues Garland’s will to wow with her own spirit, creating a unique performance that’s somehow the best of both worlds.

She has the perfectly timed comic sass and the bring-it-on swagger down to a tee – thanks to a team of vocal coaches and spending hours on YouTube – but we can still see her there, sharing the limelight; Zellweger and Garland.

As with Taron Egerton’s Elton John – and unlike Rami Malek’s Freddie Mercury – Zellweger lights up the torch songs herself.

While Garland’s raw voice was faltering by this stage, there’s still an electric tingle. She gives it her all and it’s glorious.

So much so that no one else gets a look in, from Chernobyl star Jessie Buckley’s reasonably kindly but still mostly business minder Rosalyn Wilder, to American Crime Story’s Finn Wittrock as the last of many manipulative lovers, fifth husband Mickey Deans.

This is Zellweger’s show, and just like Garland, you’ll never forget her.

Judy is in cinemas from October 17