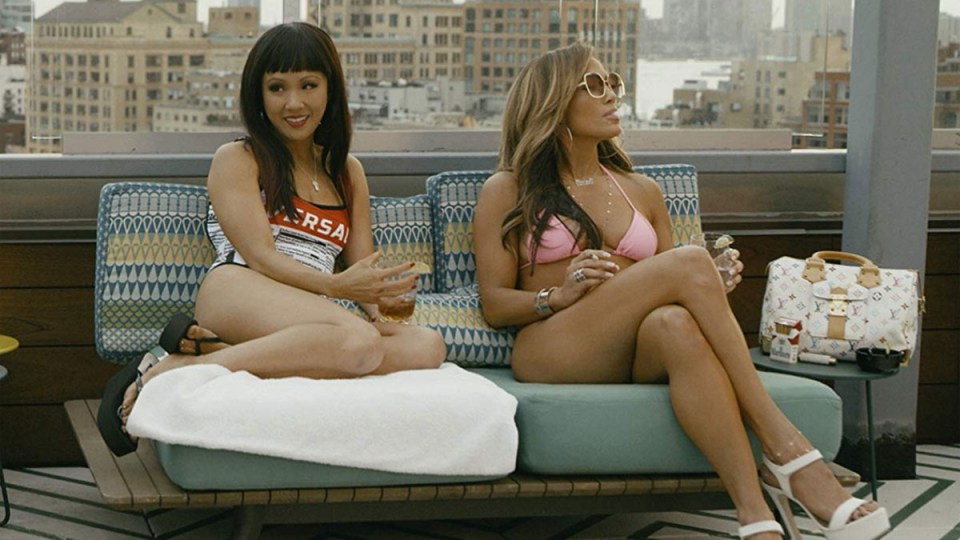 Constance Wu and Jennifer Lopez on top of the world in Hustlers. Photo: Gloria Sanchez Productions

In a world where superhero franchises rule cinemas and independent female-led flicks are hard to get greenlit, Hustlers is a gem, the smart, engrossing and morally fascinating popcorn movie you’ve been waiting for.

There’s a lot to love, not least the triumphant big-screen return of Jennifer Lopez, as magnetic as ever at 50 and demonstrating hard-earned pole-dancing prowess as strip club queen turned crime scene diva Ramona.

Dropping the soon-to-be-iconic-meme payload early on, Lopez’s Ramona reclines on a rooftop in just a bikini, heels and fur coat.

She invites rookie dancer Destiny (Constance Wu, Crazy Rich Asians) to climb on in and share her cigarette in a ridiculously hot and pivotal moment.

Setting the tone for this fun true-crime romp, writer/director Lorene Scafaria told Variety it was the first scene she wrote and the last to be shot.

But there’s way more to this comic drama than its enviably diamond-sharp glam.

Hustlers is based on Jessica Pressler’s 2018 feature in New York Magazine, a fly-on-the-wall look at real dancers from a Manhattan club who got creative when the GFC hit business hard.

Fleecing the so-called wolves of Wall Street who objectify them, the strippers lead them like sheep to the slaughter.

Scafaria, like Martin Scorsese, understands power is at its most fascinating when the means to achieve it mines murky moral ground.

And that the clawed climb up is even more thrilling when it tears down an even more corrupt establishment.

Save the Last Dance star Julia Stiles plays a wide-eyed reporter, picking Destiny’s brains about what went wrong between her and Ramona, once fierce allies, and what brought the cops to their door.

Much like a strip show, Scafaria is in no rush for the big reveal, teasing the central scam slowly. And it’s a real doozy that I won’t reveal here.

On the one hand, their pathetic, misogynistic targets inspire little sympathy, cheating on their partners while frittering away a small fortune and taking cheap potshots at the strip club performers.

But the mechanics are just grim enough to have you questioning where the line lies between cheering on women cheating men cheating families and the financial world, and supporting blatant crime.

Wu holds her own in a more restrained performance as a cash-strapped woman trying to do right by the hard-scrabble grandmother who raised her when her parents skipped town.

The Fresh Off the Boat star does capture her own scene-stealing moment when hoodwinking one client goes horribly wrong. Ferrying him to hospital, Destiny turns the waterworks up to hysterical wailing,

“Please help my husband,” she pleads, only to snap back to nonchalant the second paramedics’ turn their backs.

It’s golden comic timing worthy of its own Oscars tilt.

Focusing so tight on these two does mean a platinum cast, including singers Cardi B and Lizzo, Berlin Station’s Keke Palmer, Riverdale’s Lili Reinhart and Transparent star Trace Lysette, falls by the wayside in microscopic cameos.

It’s a small quibble, however, in a crowd-pleasing movie that also packs the smarts.

Halfway between Burlesque and American Hustle, come for the fur coat and curves and stay for the clever cream Scafaria’s cool cats whip up.

Hustlers is in cinemas from October 10