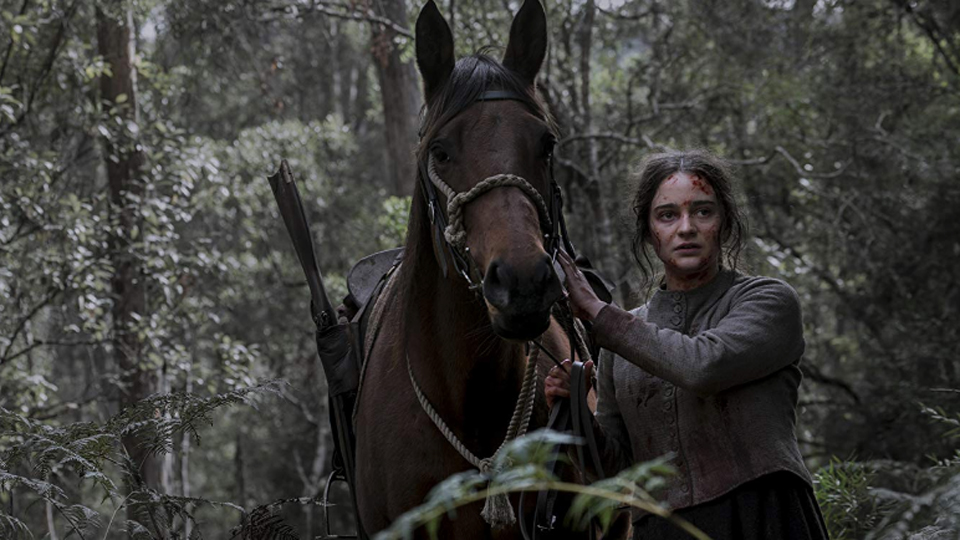 Jennifer Kent’s The Nightingale, the follow up to her 2014 smash debut The Babadook, has divided critics.

Some see it as an unsparing critique of colonialism’s savage legacy. Others accuse Kent of wallowing in sexual violence for shock value. At the Sydney Film Festival there were walkouts during a particularly grueling rape scene.

For those prepared to take it, The Nightingale is a good film with a lot to say, often quite eloquently. But in a very real respect it evolved from a sensationalist tradition that took root firmly in Australia during the 1970s, now known as Ozploitation cinema.

Ozploitation captures a genre of low-budget comedy, horror and action films that blossomed in Australian cinema after the introduction of the R-rating in 1971.

Violence and nudity were par for the course. That’s not to say that The Nightingale is an exploitative film, although some clearly think it is.

But rather, as a revenge saga depicting the bloody toll that freed convict Clare (Aisling Franciosi) takes on the officers who murder her family in Tasmania, The Nightingale may be shocking but it’s not startlingly original.

It aligns neatly with 1970s-80s Australian cinema, when filmmakers began to confront the more squalid aspects of our history and culture.

Films like Journey Among Women (1977) and later Turkey Shoot (1982) and Fair Game (1986) feature the brutalization and rape of women as key narrative drivers.

While it’s true, the women in these films turn the tables gruesomely on their male tormentors, there’s little question their pain and humiliation is there for sensational value rather than any serious cultural examination.

The desire to depict a grubbier kind of colonial experience also made it to television briefly in 1976 with Luke’s Kingdom, a squatter and convict drama that served up blood and breasts in equal measure.

But audiences weren’t really interested.  For nudity they could always watch Channel 10’s Number 96 or its even racier cousin The Box.

And nostalgic dramas like The Sullivans or the inexhaustible stable of Crawford Productions police dramas (Homicide, Division 4 or Matlock Police) proved much more attractive to ’70s viewers than confronting the cruelties of our colonial past.

Oddly, the film with the strongest apparent influence on The Nightingale is set not in colonial but in post-apocalyptic Australia.

With the release of Mad Max in 1979, Ozploitation reached its cultural zenith and peak profitability.

A smash hit that spawned a mega-franchise and catapulted Mel Gibson to superstardom, Mad Max was a fuel-soaked revenge saga where a lone hero eliminates a gang of murderous bikies.

Max shares several plot elements with Nightingale – the hero is maddened by the murder of their family and mounts up to avenge them savagely.

As with all Ozploitation revenge sagas, Toecutter’s (Hugh Keays-Byrne) hoodlums are also rapists, but unlike with Clare, it would of course have been impermissible for Max himself to be so assaulted.

The target audience of unsophisticated young suburban men (of which I was certainly one) would have found that too challenging. So a young couple the gang chance upon become unhappy sacrifices to demonstrate the rapine foulness of Toecutter’s crew.

Where Nightingale differs fundamentally from Mad Max is its treatment of race.

Apart from excluding Indigenous characters, hardly unique in 1979, Mad Max has no racial thesis at all. But race/ethnicity is everything in The Nightingale.

Clare insists to her Indigenous guide Billy (Baykali Ganambarr) that as an Irishwoman she has a head start on being brutalised by the English.

In this, it seems Kent is aware of The Nightingale’s genre roots and is trying to transcend them by elevating the national/cultural over the personal.

It might not make much difference to the viewer experience that The Nightingale evolved from a broader local cinematic tradition. But Australian films have being searching for new ways to shock audiences for fifty years.

If graphic depictions of rape and murder are accepted as reasons to question a film’s legitimacy this would leave a gaping hole in Australia’s cinematic heritage.