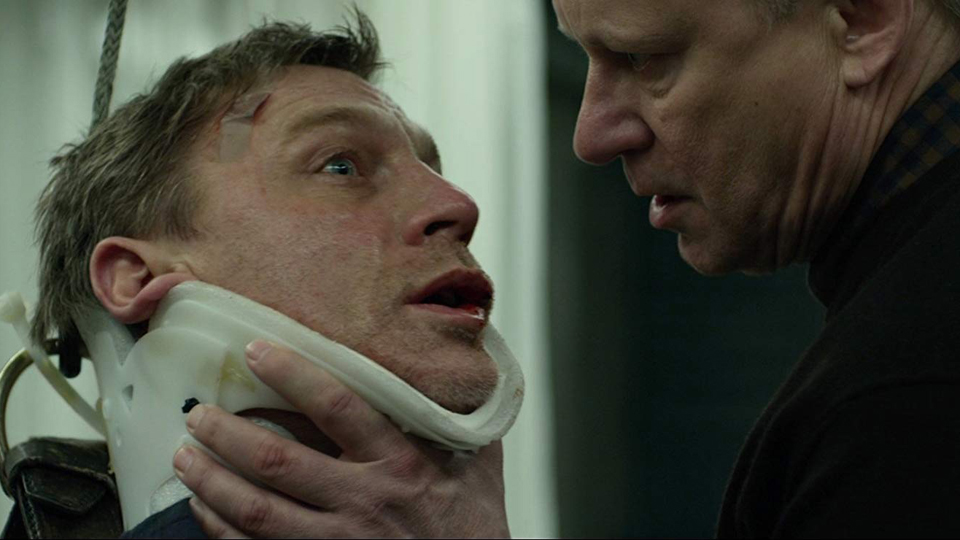 Stellan Skarsgard dishes out the serial killer treatment to Daniel Craig in The Girl with the Dragon Tattoo. Photo: Columbia Pictures

The second series of Mindhunter has dropped on Netflix to an enthusiastic, if nervous viewer response. Concentrating on Wayne Williams, the Atlanta child murderer of the early 1980s, the show has really found its feet.

It might feature one subplot too many but it also features a bloody kaleidoscope of serial killer cameos, most notably ‘Son of Sam’ David Berkowitz, and Charles Manson and his drugged-up enforcer, Charles ‘Tex’ Watson.

Australian Damon Herriman’s turn as the psychotic Manson is compelling (he had a practice run after all, as a younger Manson in Tarantino’s Once Upon A Time In Hollywood), but it’s Cameron Britton as ‘Co-ed killer’ Ed Kemper who continues to be the series’ most terrifying centrepiece.

Kemper’s oversized, shuffling awkwardness as he matter-of-factly recounts his murders to FBI interrogator Holden Ford (Jonathon Groff, whose name is cited in the show as a joke only Australians will get) goes to the heart of what people find so terrifying about convicted serial killers – their ordinariness.

These are unremarkable men who have nonetheless inflicted indelibly vicious damage to the lives of dozens of families.

Not that they’re all ordinary. Since the good Doctor Lecter first donned a hockey mask the cinema has dished up to audiences some truly memorable psychopaths. Here are three of the best (or worst, depending on your perspective).

Anthony Hopkins’ performance as Hannibal Lecter garnered all the glory (and the Oscar) but he’s not the serial murderer being hunted in Jonathan Demme’s groundbreaking adaptation of the Thomas Harris bestseller. Or at least not for the first couple of acts.

And while ‘A census taker once tried to test me. I ate his liver with some fava beans and a nice chianti’ is the most quoted line, ‘It rubs the lotion on its skin or else it gets the hose again’ makes for the more disturbing meme. As for preening in front of a mirror, let’s not even go there.

The Zodiac killer terrorized the residents of San Francisco’s Bay Area during the late 1960s. He was never caught and his homicidal exploits had already inspired one unforgettable murderer (Andrew Robinson’s Scorpio in Clint Eastwood’s 1971 Dirty Harry), when Mindhunter producer/director David Fincher made this crime epic.

Zodiac might have eluded justice but clearly Fincher thinks he has found his man in Allen: the film all but decks him out in an ‘I did it and I’m glad!’ t-shirt. Lynch is skin crawlingly creepy as the chief suspect. Like Britton’s Ed Kemper he uses Allen’s looming stature to suggest constant menace without us actually seeing him do anything illegal.

And no matter who Zodiac was, the attack on the couple at Lake Berryessa is one of the most shocking cinematic murders of the century.

In recognition of Lynch’s performance, and of Ted Levine’s Buffalo Bill, Martin Scorsese cast them as the deputy-warden and warden respectively of the creepy prison in Shutter Island (2010): a delicious in-joke.

Martin Vanger (Stellan Skarsgard), The Girl With the Dragon Tattoo, 2011

Three years after Skarsgard terrorized audiences by frolicking nude to ABBA tunes on a boat in the Mediterranean he terrorized Daniel Craig in David Fincher’s English language adaptation of the Stieg Larsson literary phenomenon.

I’m one of the distinct minority who prefer Fincher’s version to the Swedish original – it cleans up the ending for one thing, dispensing with the weird Australian deus ex machina. But few would dispute that compared to Peter Haber’s original turn, Skarsgard, as the corrupted Vanger family’s outwardly affable number one son, turns in the more blood-chilling performance.

Martin might be a product of his family’s Nazi-sympathising, incestuous legacy, but as opposed to, say, Psycho’s tortured Norman Bates, he seems to revel in the damage done to him. What’s more, he’s apparently eager to share his damage with the world, or whomever he can tempt into his elaborately equipped murder room.

Of course, no list is exhaustive and in concentrating on this homicidal troika I have excluded other mesmerising murderers such as Francis Dollarhyde from Manhunter (1986) or Se7en’s John Doe (1995).

I’d value seeing readers’ suggestions about which screen killers most haunted their dreams.

‘Admit what the hell is going on’: Biden wants US to face White Supremacy problem
Sydney home sprayed with bullets in gang violence
Device detonated, man arrested in Brisbane sieges
Peace talks between Russia, Ukraine stall
Viagogo loses appeal over $7m penalty
British MP arrested on suspicion of rape
Why the launch of Disney Plus could spark the return of internet piracy
Today's Stories

The most terrifying movie serial killers of all time