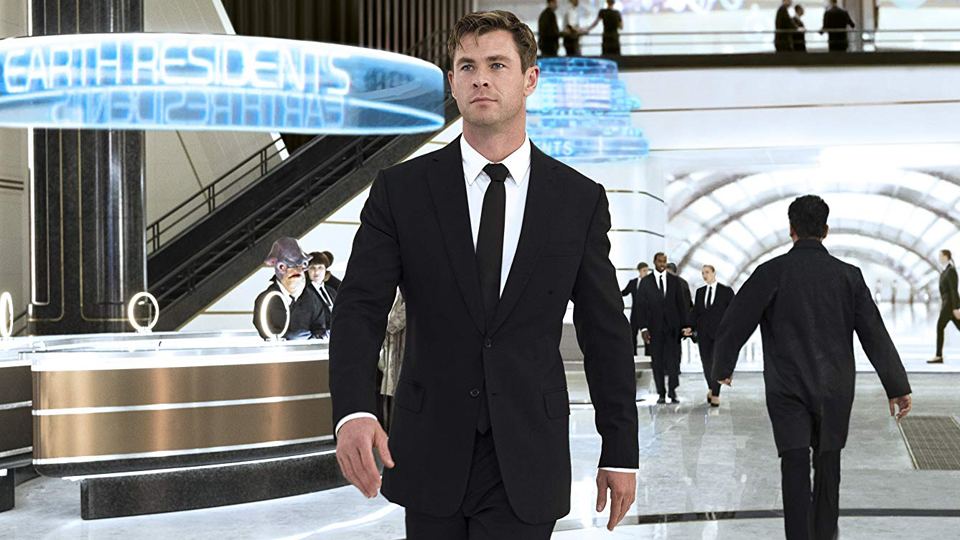 Thor star Chris Hemsworth, 35, has announced he is taking a break from making movies to spend more time with actor wife Elsa Pataky, 42, and their kids India, 7, and five-year-old twins Sasha and Tristan.

It’s an admirable time-out after a roller coaster year of filming that included appearing as the Norse god of thunder in Marvel’s box office-shattering blockbuster Avengers: Endgame.

It’s just a pity Hemsworth didn’t stop before shooting the atrociously boring dud that is Men in Black: International.

The latest version is a reboot of the alien-policing buddy cop movie franchise kicked off by Tommy Lee Jones and Aladdin star Will Smith in 1997.

That initial outing, directed by Barry Sonnenfeld (The Addams Family), was packed full of wacky comedy and kooky extra-terrestrials, both friend and foe.

It was a total hoot, unlike this dead-on-arrival drivel directed by F. Gary Gray (The Fate of the Furious, Straight Outta Compton) which feels totally unnecessary 20 years later and lacks the Jones/Smith magic.

Let’s play nice and start with what Men in Black does get right: Emma Thompson.

Known for contributing to her character’s lines, we can only assume she injected some oomph into the script as Agent O, the head of Men in Black’s American outpost. That arch wit is sorely lacking in the screenplay by Iron Man scribes Matt Holloway and Art Marcum.

Emma certainly gets the best line in the film, reacting with knowing exasperation when lead Tessa Thompson’s rookie Agent M kicks up a stink about Men in Black’s sexist name.

The problem is, the British dame is in the film for less than five minutes, bookending with brilliance a sluggish two-hour slog that sinks into stupidity without her.

Tessa Thompson has bucketloads of charisma, but that seems to have been extracted by the agents’ trademark memory-wiping neutraliser as she plays an ambitious newbie who devoted her life to finding a way into the agency after a cute close encounter with a furry fluoro blue alien as a kid.

Taika Waititi’s Thor: Ragnarok paired her with Hemsworth to great comic effect, but there’s no sign of life here, alien or otherwise.

I’m glad Tessa scored a big lead, but she deserves better than this and there’s zero chemistry between them here, with the film that flails around them lacklustre.

Making surprisingly little use of its tentacled, three-armed and furry CGI ensemble, The Big Sick star Kumail Nanjiani is squandered as a pocket-sized alien who devotes himself to Agent O.

The main villains, played by striking French twins and hip-hop stars Laurent and Larry Bourgeois, aka Les Twins, look great and certainly have smooth moves, but the script’s so clunkily thin they make next to no impact on the plot.

Even a generic Marrakesh-set chase stinks.

Then you’ve got the uncomfortable appearance of Liam Neeson as the London branch’s on-the-nose-named Agent High T, so soon after a backlash sparked by his shocking comments about race in an interview with The Hollywood Reporter.

Much like Hemsworth, this restart needs a time-out already.

Men in Black: International is an atrociously boring dud even with Chris Hemsworth