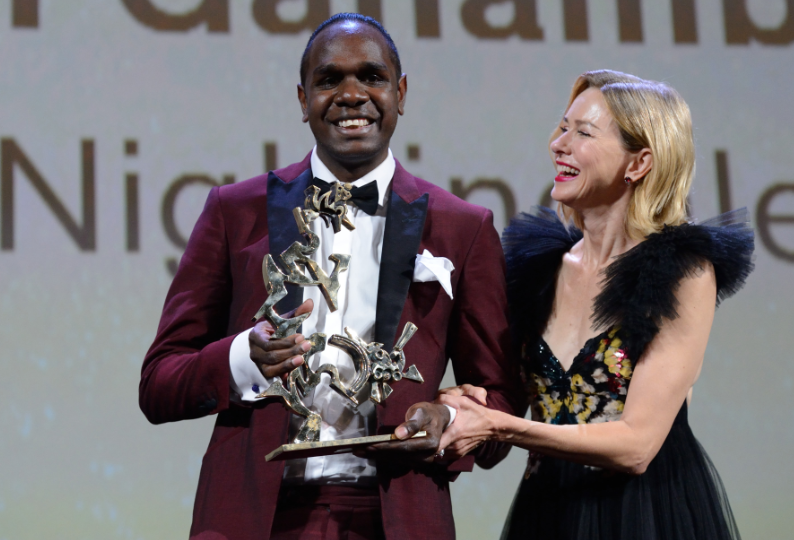 Australian writer-director Jennifer Kent’s The Nightingale has scored a double whammy at the Venice Film festival.

In this sometimes violent film set in 19th century Tasmania a 21-year-old Irish convict woman (played by Aisling Franciosi) and an Aboriginal tracker (played by Ganambarr) pursue the British army officer who wronged her family.

The picture prompted a screamed sexist insult against the director during the press screening which in turn caused the screamer to have his press credentials pulled.

“Shame on you, whore! You Suck!” reviewer Sharif Meghdoud shrieked when Kent’s name appeared on the screen as the final credits rolled.

Meghdoud later apologised but gave no explanation for the outburst, which drew immediate condemnation from the audience at the screening and also on social media.

“I would also like to say to all those women out there wanting to make films, please go and do it. We need you,” Kent said accepting the award.

“The feminine force is the most powerful and healing force on the planet.

“I’m confident next year and the year after we’ll see more and more women inhabiting this space.”

Alfonso Cuaron’s Roma, a black-and-white drama drawn from the director’s memories of growing up in Mexico City in the early 1970s which marks his return to Spanish-language filmmaking, won the festival’s top gong, the Golden Lion.

Roma, which is clearly Cuaron’s most personal work, is centered around two domestic workers, both from Mixteco heritage, who tirelessly take care of a small family in the middle-class neighbourhood of Roma.

Joel and Ethan Coen won best screenplay for their Western The Ballad of Buster Scruggs, originally conceived as a TV series, also from Netflix.

Netflix has had a major presence at the Venice, with six titles, and this edition marks the giant streamer’s first major prize on the major festival circuit.

Australian film The Nightingale is the toast of Venice Film festival