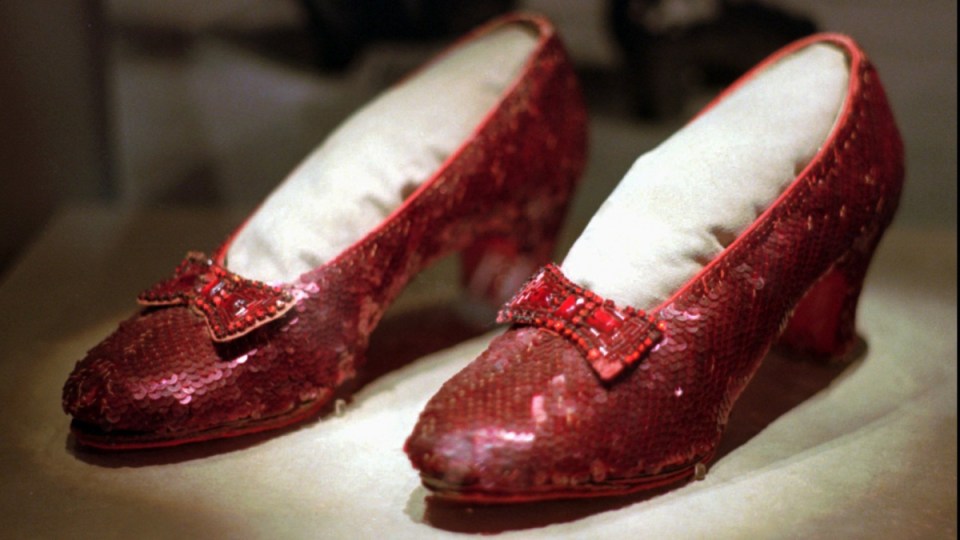 A pair of ruby slippers worn by Judy Garland in The Wizard of Oz have been recovered. Photo: AAP

The iconic ruby red slippers worn by Judy Garland in the film The Wizard of Oz have been recovered, 13 years after they were stolen from a museum.

The Grand Rapids Police Department in Minnesota and the FBI announced on Wednesday morning (AEST) that one of three known pairs of sequinned shoes that followed the yellow brick road had been recovered.

The slippers were stolen from the Judy Garland Museum in Grand Rapids, Minnesota in 2005.

Officials have not released details of how the famous shoes were recovered as the case remains active.

Grand Rapids Police Sergeant Robert Stein said authorities stayed quiet about the slippers’ whereabouts, out of fear the perp would destroy them.

“The police department really had no evidence and no clues to work with,” he said.

“The investigator assigned to the case was fearful that the thief might destroy the slippers if he believed the police were on his trail.

“Therefore, when rumors developed that local wayward youth were most likely responsible for the theft and had tossed the slippers into the Mississippi River or in one of the many water filled iron ore pits that dot the landscape, we did little to dispel it.

“We believed that information would eventually surface and knew we were in this for the long haul.”

The shoes were recovered in Minneapolis earlier this summer, after a 2017 tip to Detective Brian Mattson led the department to team up with the FBI, as the tip involved investigating outside the state.

The red slippers are now in possession of the FBI.

A pair of ruby slippers worn by Judy Garland in the 1939 film The Wizard of Oz, and stolen from the actress’ namesake museum in Minnesota more than a decade ago, has been recovered: https://t.co/5HsUe163VF pic.twitter.com/edKUFiwWpf

“When the slippers were snatched in that early morning burglary, the thief not only took the slippers but also a piece of history that will be forever connected to Grand Rapids and one of our city’s most famous children,” he said.

“We knew this day would eventually come and we are grateful to the FBI and all those that worked so hard to bring this piece of cinematic treasure out of the shadows and into the light. After all, ‘There’s no place like home!'”

At least two existing pairs of red slippers are owned by private collectors, including a pair jointly owned by actor Leonardo DiCaprio and film director Steven Spielberg on display at the Academy Museum of Motion Pictures.

Stolen ruby slippers from Wizard of Oz found after 13 years