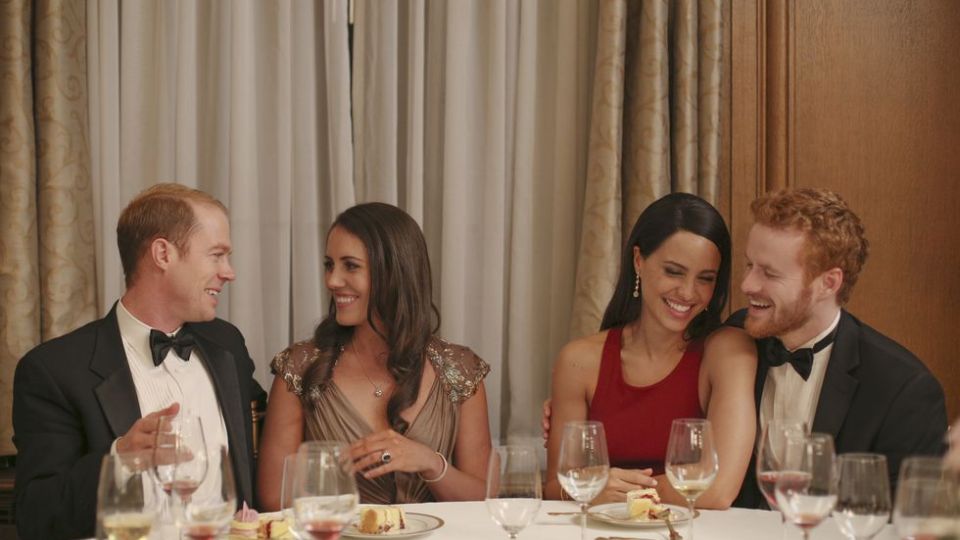 The cast of Harry & Meghan: A Royal Romance: William and Kate on the left, and Harry and Meghan on the right. Photo: Lifetime

A first look at an American television movie based on the love story of Prince Harry and his future wife Meghan Markle suggests it will leave little to the imagination in regards to the royal romance.

Harry & Meghan: A Royal Romance, from US cable channel Lifetime, captures the early months of their relationship, from their camping trip to Botswana to Harry’s marriage proposal in the kitchen of their Kensington cottage.

It stars Jamaican-American actress Parisa Fitz-Henley as former Suits star Meghan and Scottish actor Murray Fraser as Harry and airs in the United States on May 13, six days before the real-life couple walk down the aisle.

The 20-second clip shows what looks to be Meghan and Harry’s first date, before cutting to a shot of the pair getting cosy in an upmarket tent – presumably meant to be the luxury camp in Botswana where they got to know each other out of the public eye.

“I don’t need my life to be this perfect royal picture, I just need you,” Fraser says, in character as Prince Harry.

There are also some fairly risque shots of faux Harry and Meghan enjoying a romp in their bed and kissing passionately on the street.

Of course, the show also recreates the at-home proposal Harry executed in November 2017 with a ring he designed using a diamond from Botswana and two gems from his late mother Princess Diana’s collection.

The film also goes back in time, with recently released promotional pictures showing actress Bonnie Soper in costume as Diana, who died in a car accident when Harry was only 12 years old.

Initial responses to the short trailer have been surprisingly positive – New York Magazine called it “fine and campy”, while Elle magazine called it “so steamy” and many of Twitter deemed it “cheesy” but eminently watchable.

Does the Prince Harry & Meghan Markle Lifetime movie look cheesy?? HELL YEAH! Am I still going to watch it??? pic.twitter.com/GiW3iqAqDW

Harry and Meghan had no involvement in the film, despite Meghan having honed her acting chops earlier in her career in a couple of movies for Hallmark – a US channel not dissimilar to Lifetime.

The films, titled Dater’s Handbook and When Sparks Fly were released in 2016 and 2014 respectively and Meghan played the central love interest in both.

Meanwhile, Fitz-Henley and Fraser are wholeheartedly embracing their onscreen roles by posing together in Instagram photos, with Fitz-Henley telling her growing Instagram following: “All I can think of is, ‘What can we make together next?!'”