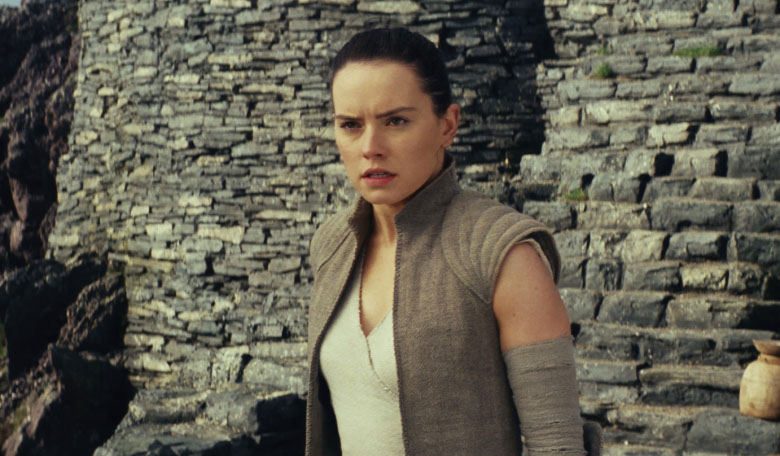 Daisy Ridley stars as Rey, the feisty scavenger who encountered Luke Skywalker at the end of 2015's The Force Awakens. Photo: Disney

You probably missed it, but not too long ago the new face of the Force slipped into Australia, enjoyed sipping coffees near the St Kilda Pier in Melbourne and dabbled in a bit of yoga.

Daisy Ridley, the 25-year-old London-born star of the new Star Wars films, has had her face emblazoned on billboards, action figures and countless items of merchandise but she managed to sneak into Australia, visit her sister Poppy and hang out like a regular tourist.

“One guy came up to me actually,” Ridley, noting a rare moment when her cover was blown in Melbourne, told AAP in an interview in Los Angeles.

He was really sweet, but Australians were pretty chill.”

Anonymity is a rare gift for Ridley since she was cast as Rey in the 2015 reboot of the franchise, Star Wars: The Force Awakens, playing a scavenger who teams up with stormtrooper deserter Finn, Han Solo, Chewbacca and becoming The Resistance’s great hope against the evil First Order.

When she met AAP for an interview in an LA hotel to discuss the next chapter, Star Wars: The Last Jedi, security was intense and Disney publicists requested the location not be revealed ahead of time to prevent rabid Star Wars fans descending.

The actress is in a playful mood and keen to speak about her Australian visit and, surprisingly, juicy tidbits about the ultra-secretive new plot.

Disney did not show the film to journalists to protect plot points and twists.

The Force Awakens ended literally on a cliffhanger – with Rey tracking down the great jedi Luke Skywalker high up on a spectacular, rocky island on the planet Ahch-To.

Ridley says Rey and Skywalker, played by the franchise’s original star Mark Hamill, will spend some time on the island in The Last Jedi, with Rey dealing with the trauma she endured in Force Awakens.

“Luke is not such a welcoming host as she might have expected so she has time to work things out,” Ridley says.

“She’s still massively impacted by what just happened and she’s worried about Finn, she’s grieving Han Solo and she is trying to figure it all out.

“She’s just there and has time to ask questions and find some belonging which she sort of does.”

The Last Jedi will offer Star Wars fans fresh insight into most of the Force Awakens characters.

“I think what (director) Rian (Johnson) has done brilliantly is he has explored all of the characters on a really deep level,” Ridley said. “Everyone has there own conflict.

“Snoke has gone from being this phantom, nobody knows what he really is, to getting proper screen time in this. He is incredibly intimidating and really, really scary.

“Kylo is scary because of the tempestuous nature of him and the incredible power that could go either way, but Snoke is just bad through and through.”

Ridley’s sister did not plan on making Australia home.

“She went down to have a little adventure and she met a wonderful man,” she says. “A lovely Australian man. She has lived there for two years.”

Ridley has attempted to maintain a normal life, whether it is riding the Tube at home in London or flying into Melbourne without an entourage.

“I usually take a lightsaber when I’m not trying to blend in,” she laughs.

Her favourite Melbourne moment was stopping at a cafe.

“We went to this lovely cafe on the beach at St Kilda,” she says. “It was by the pier.

“It was just great to go to Australia because it was wonderful to have the time with my sister and see how she lives.

“We’d have breakfast and then go for a wander and she would show me her favourite restaurants and do some yoga.

“It was a yoga I have not done before – you sit in the pose for a long time. It is more of a relaxation thing that was very, very difficult but wonderful.”

Star Wars: The Last Jedi opens in Australia on Thursday.