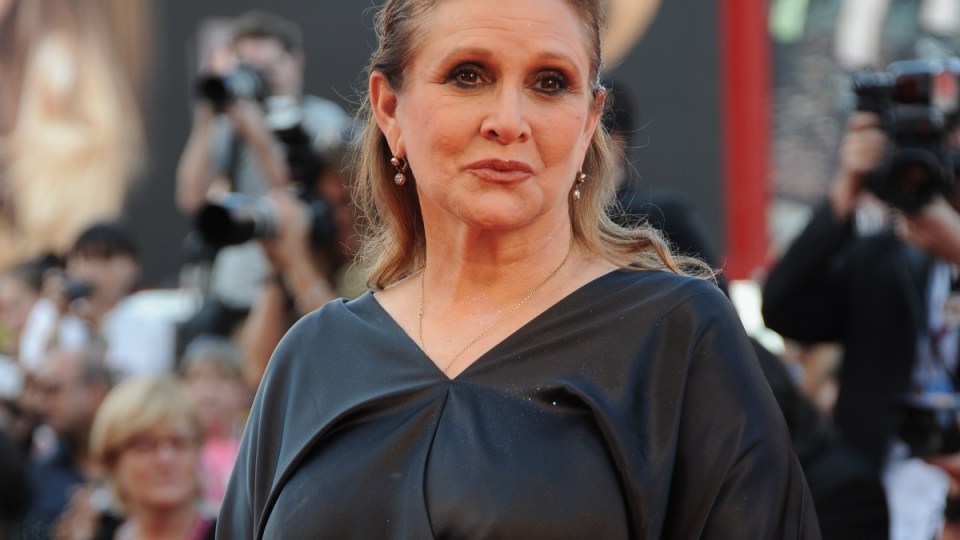 The much-anticipated world premiere of Star Wars: The Last Jedi opened with a touching tribute to its lost princess, the late Carrie Fisher, in her final appearance as Leia.

Writer-director Rian Johnson introduced the latest edition of the blockbuster sci-fi franchise on Sunday with a poignant tribute, saying: “Let’s all have a blast tonight for Carrie.”

Fisher, 60, died of a heart attack in December 2016, after completing filming for The Last Jedi.

“I want to dedicate tonight to Carrie, who is up there right now flipping me the bird, saying ‘Damn it Rian, don’t you dare make this night a solemn tribute’,” Johnson said.

The first glimpse of the new movie followed a subtle tribute to Fisher’s absence.

The New York Times published a roundtable discussion of the Last Jedi cast on Friday accompanied by a poignant photo in which a physical space is left for the absent actress.

DID THE STAR WARS CAST INTENTIONALLY LEAVE THE SPACE IN THE MIDDLE FOR CARRIE IN THIS PHOTOSHOOT?? pic.twitter.com/NDxDeIBobh

The elaborate premiere featured a procession of Stormtroopers and droids ushering movie-goers to the first showing of the Last Jedi in Los Angeles.

The procession of characters took them down a red carpet set up under a towering model of an assault vehicle and into a tented area where photos and interviews were taking place before the film’s premiere.

But for diehard fans the screening couldn’t come soon enough as they shared their initial reactions to the movie on social media.

“I am STUNNED by #StarWars #TheLastJedi. I gasped, I laughed, I screamed, I cried and I had the time of my life. Rian Johnson pulled it off, making what might be the best Star Wars movie ever,” IGN Comics editor Joshus Yehl tweeted.

“#StarWarsTheLastJedi floored me @rianjohnson and the team nail so much – thrills, laughs, heart and most of all, pushing the characters/overall franchise a major step forward. Some really rich material to explore in the future. Can’t wait for more,” one fan wrote.

Holy wow. I’m stunned at @starwars #TheLastJedi. An adventure as epic & sweeping as all the other films combined, with laughs, tears, and moments that will make your head pop off. I CARED about this movie. What a great feeling.

“#StarWars: The Last Jedi is so beautifully human, populist, funny, and surprising. I cried when one POC heroine got her moment because films like these leave their mark on entire generations – and representation matters,” another said.

Mark Hamill, who plays the infamous Luke Skywalker, tweeted from the screening, asking fans to “keep the secrets of VIII”.

He also made a reference the lyrics to the Beatles’ Sgt. Pepper’s Lonely Hearts Club Band.

“We’re Rian Johnson’s cast of Last Jedi. We hope you will enjoy the film.
It’s wonderful to be here-It’s certainly a THRILL. You’re such a lovely audience –We’d like to take you home with us. We’d LOVE to take you home!” he wrote.

The Last Jedi is one of the year’s biggest releases. Early box office projections are for the film to debut in the $US200 million ($280 million) range on its first weekend.