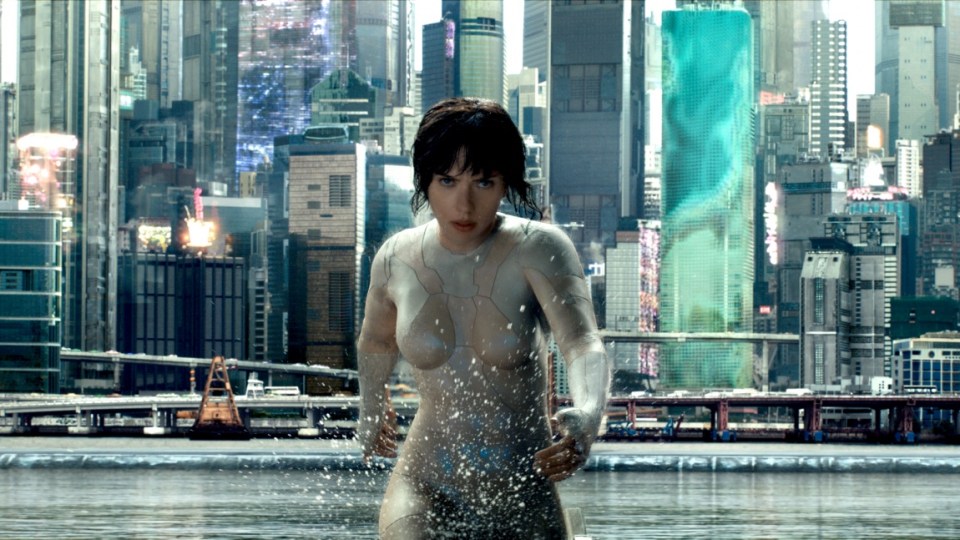 Even Scarlett Johansson can't save Ghost in the Shell.

Internet outrage exploded when Marvel star Scarlett Johansson was announced in the lead role of Hollywood’s live-action reboot of Japanese sci-fi story Ghost in the Shell.

Set in a Blade Runner-like future Japanese megacity, Johansson plays the lead role of Major, a cybernetic cop endowed with a real human brain – the first of her kind.

Super-strong, fast and smart, she works for Section 9, a militarised detective agency charged with protecting tech-addicted citizens from cybercrime.

Recalling The Matrix, the Major experiences ‘glitches’ in her perception and begins to suspect all is not right with her orphaned refugee backstory. At the same time, a deadly assassin begins to pick off her colleagues.

Directed in pedestrian fashion by Rupert Sanders of Snow White and the Huntsman ignominy, Ghost in the Shell is both boring and derivative.

What’s more, the casting is an even bigger problem than expected. Yes this megacity is a multicultural melting pot, but would it really have been so awful to hire an upcoming Japanese actress?

Originating in Masamune Shirow’s manga comics, Japanese director Mamoru Oshii helmed two Ghost in the Shell animated movies. He has publicly defended Johansson’s casting, arguing that Major’s body is cybernetic, so it doesn’t matter what race she is.

True, but Japanese actors are, for the most part, relegated to decorative extras here. The only one with any significant plot influence is the excellent Takeshi Kitano. As the Major’s Japanese-speaking boss Aramaki, he brings gravitas to a skeleton role.

Caucasian writers Jamie Moss and William Wheeler insert a hokey, apologetic reason for Major’s whiteness that only exacerbates the problem.

It could have been interesting to suggest the big, bad, robot-producing corporation that built her has Nazi tendencies, but that’s never given any room.

The action is few and far between, never topping a spectacular opening scene with a skyscraper skydive and a gun fight with deadly Geisha robots.

For a film supposedly exploring what it means to be human, it’s all very shallow. Johansson did much more interesting work in Jonathan Glazer’s disturbing Under the Skin. She overplays the emotional reservation.

American actor and model Michael Carmen Pitt is just as underwhelming as the emo-caped assassin Kuze, yet another generic superhero film villain.

Dreary editing pulls almost all of the violent punches and even Johansson’s sexuality and ambiguous pseudo-nudity can’t save this spectacle.

By the time Ghost in the Shell stumbles towards its anti-climactic CGI finale, it’s hard to care much whether Major live or dies. That would involve Sanders and his writers investing even a skerrick of heart to this plodding and problematic Hollywood beast.

Ghost in the Shell is already 2017’s worst movie