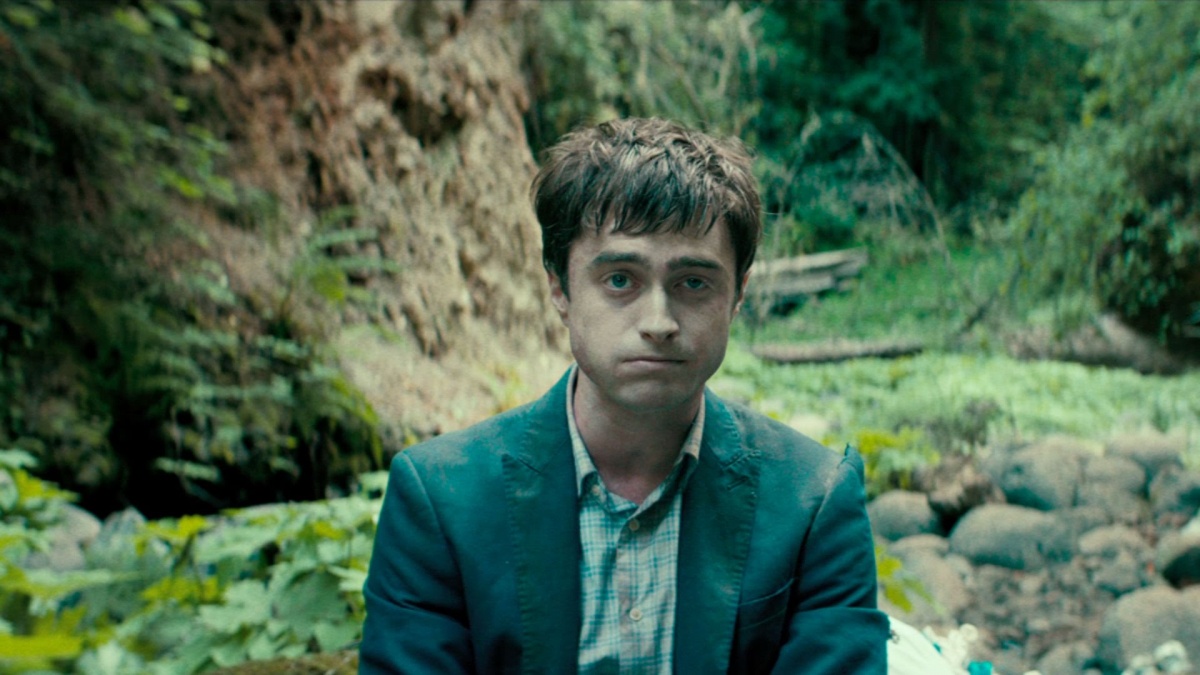 Australians are a hardier bunch, not only staying put for its 90-minute showing at the Sydney Film Festival, but also laughing uproariously throughout.

Taking it too seriously would be a mistake, but there’s an oddly warm beating heart to what’s commonly described as the ‘farting corpse movie’.

The movie opens with a challenging shot of Paul Dano’s despairing Hank at the end of a noose on a desolate desert island.

Having failed to attract a rescue mission, his salvation comes in the form of Radcliffe’s slack-jawed, bulging-eyed and grey-skinned Manny, a washed-up and extremely gaseous corpse whose appearance on the beach gives him a strange kind of hope.

Sure enough, Manny’s epic flatulence, emanating from Radcliffe’s pertly hairy butt, is powerful enough to propel the pair off the island jet ski-style – an eye-opening twist on the Survivor model.

A bizarre buddy comedy hybrid of Tom Hanks’ Castaway and the Ryan Gosling-led Lars and the Real Girl, Swiss Army Man is provocative and yet endearingly absurd.

It turns out the delirious Hank, who was pretty isolated long before being stranded, finds human comfort in this fortuitous cadaver, and not (quite) in an icky way.

Spurring in him a survival instinct he’d all but given up on, Hank straps Manny to his back and sets off through dense forest on the distant shore, searching for civilisation tellingly-signalled by numerous deposits of trash.

That trash also makes for some pretty cute Michel Gondry-style animated dress-ups as Hank, near death from starvation and thirst, projects at first friendship then a vaguely queer surrogate form of romance onto the oddly reanimated corpse.

A stirring in Manny’s groin oddly points the way to safety, and a miraculous stream of drinkable water from his mouth provides sustenance in one of many overtly gross-out moments.

In another incident, a raccoon has a nibble at Manny’s lips (don’t worry Radcliffe fans, he never gets too chewed).

In among The Revenant-esque bear mauling, literally explosive farts, stone shooting pyrotechnics and ‘special compass’ erections, it’s a surprisingly delicate exploration of the interior life of a man so alone he can find solace in decay, learning to love not only himself, but also his dead best friend.

At times frustratingly silly, more often Swiss Army Man is a dreamily whimsical musing on the human condition that brings a rare smile and plenty of cute nods to other movies.

Most memorably, Jurassic Park is recalled in the sweetly-sung score by Andy Hull and Robert McDowell that almost tips over into musical in places.

With Netflix mentioned in one makeshift sofa-session scene, it’s surely only a matter of time until the streaming service snaps it up.