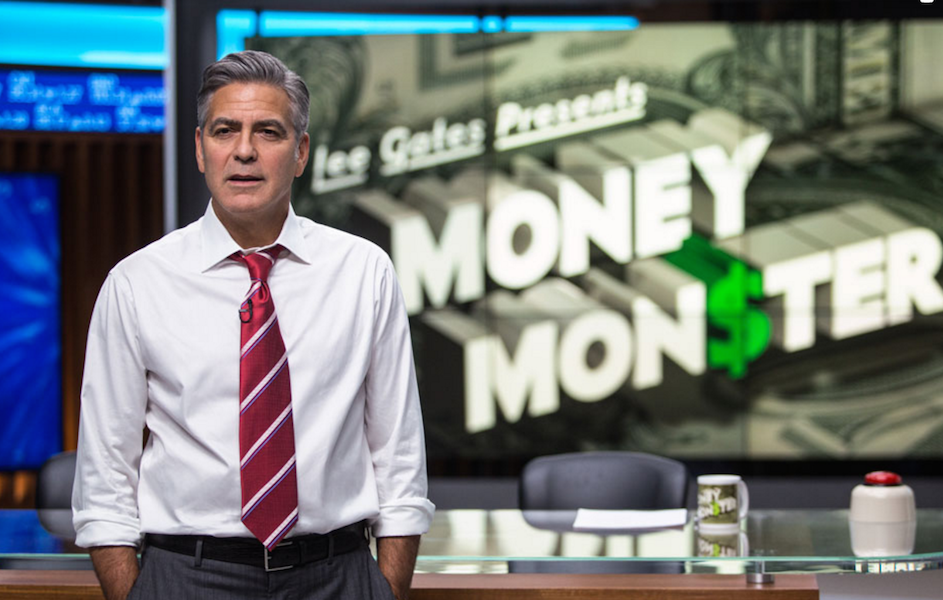 If you go into Money Monster expecting to be entertained, you will walk out a very happy customer.

However, if you walk in hoping for it to adequately deal with the mammoth issues it raises, you might be a little disappointed.

George Clooney is at his loveable best as Lee Gates, the charismatic but superficial host of Money Monster, a Mad Money-style stock market show filmed live in New York.

Julia Roberts as his beleaguered producer Patty is the perfect counterpart – they have an on-screen chemistry that hints at their long-running off-screen friendship.

The pair must put this chemistry to good work when their studio is invaded mid-broadcast by disgruntled investor Kyle Budwell (British actor Jack O’Connell), who lost tens of thousands of dollars when one of Gates’ stock picks went south.

Armed with an explosive vest and a gun – that perennial American movie fixture – Budwell hijacks the broadcast in an effort to get real answers about the mysterious crash, which experts blamed on a “tech glitch”.

The answers he gets aren’t just shocking, they’re chilling – a comment on the implied real-life corruption of Wall Street.

The premise is excellent and provides plenty of room for addictive action and even humour – the hijinks of the various characters employed by the TV show actually elicited uproarious laughter at the screening this writer attended.

The spanner in the works is O’Connell, whose performance as Budwell is almost too good for the rest of the movie. He deserves more focus, more exploration and more screen time and his inclusion highlights what’s lacking in the movie.

While O’Connell (who you might recognise from Angelina Jolie’s Unbroken or television’s Skins) slots in well with the rest of the shiny, attractive Hollywood cast, he would also do just as well in a grittier film more able to handle the themes Money Monster skims over.

And skim over them it does. Although Foster had packed plenty of edge-of-your-seat action into an hour-and-a-half, the ending feels incomplete and bizarrely solemn despite all the wisecracks.

Perhaps the most unsettling element of the film is the way it portrays the public’s reaction to Gates being taken hostage and threatened in real-time. Gifs, think pieces and social media campaigns abound, but compassion is curiously lacking. It’s a pretty accurate reflection of our society’s voyeuristic consumption of tragedy in the news.

The final moral of the story is a messy one that almost deserves its own panel show discussion, preferably with Foster weighing in. However, it takes a satisfying and exhilarating journey to get there, mainly thanks to a script that defies traditional format to become a drama/comedy/thriller hybrid.

For a $20 movie ticket, Money Monster will certainly take you on a value-for-money ride. You just might leave feeling a little disenfranchised.