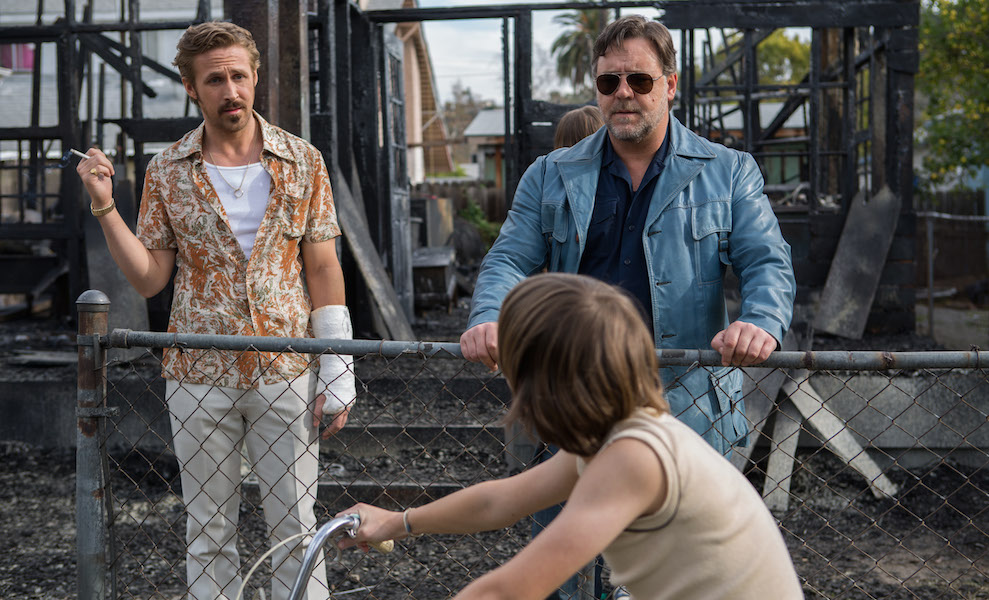 Despite being a fundamental element of the filmmaking process, the promotion of screenwriting is rare.

Screenwriters of widespread renown are even more rare.

But every so often, quality of writing is impossible to ignore. Aaron Sorkin’s work (The Social Network, The West Wing) is an example of this. Charlie Kaufmann’s (Being John Malkovich, Adaptation) is another.

Twenty years ago, Shane Black became the highest paid writer in Hollywood after receiving four million dollars for his script for The Long Kiss Goodnight. And then, burnt out and disdainful of the increasing commercialism of his work, he withdrew from Hollywood.

It was nine years until the next script by Black would be produced – his directorial debut, Kiss Kiss, Bang Bang.

But for a decade, starting from the late 80s, Black was one of the most significant screenwriters in mainstream film.

He may not have invented the modern “buddy” action comedy, but he came as close as one could to perfecting it with his screenplay for Lethal Weapon, the film by which all films of the ilk will forever be judged.

For years, by virtue of wit and a natural instinct for narrative, Black imbued life into potentially dim-witted, generic filmmaking. And when Black left Hollywood for almost a decade, the buddy action comedy genre that he had helped conceive and promote seemed to go with him.

There’s a powerful sense of nostalgia, perhaps déjà vu, to Black’s new film, The Nice Guys, which he also directs.

Ryan Gosling’s Holland March and Russell Crowe’s Jackson Healy are undeniably cut from the same cloth as the iconic Riggs and Murtaugh from Lethal Weapon.

March is a low-level private eye with an uncertain moral compass. Healy is a well-meaning tough guy who happens to have a gift for intimidation.

Fate forces the duo together as unlikely partners in a search to uncover the whereabouts of a missing girl named Amelia, who may have ties with the Los Angeles pornography industry.

Plot is inconsequential, but it often is in this sort of film. The strength of Black’s writing lies in the interaction between characters. Gosling and Crowe might not quite reach the electric chemistry of Danny Glover and Mel Gibson, but they are an exceedingly watchable pair nonetheless.

Gosling is unexpectedly relaxed and Crowe unexpectedly warm. You could follow the plot, or you could surrender yourself to their charm. The two are strange bedfellows that gel despite themselves.

Black is re-evaluating himself with The Nice Guys. Tropes and beats that he invented in the late 80s are expected, engaged with, and perverted, much in the same way that Wes Craven’s Scream was concurrently a product of the slasher genre and a reappraisal of it.

There’s a thin line between The Nice Guys and films that try to be like The Nice Guys. The difference is fun. And wit. This is brainless cinema made by people with brains.

Endorsement of screenwriting is woefully inept within the film industry. But here we have a genre dictated by the quality of Shane Black’s writing.

In his youth, he created it. In his hiatus, he subdued it. Now, he has revived it.