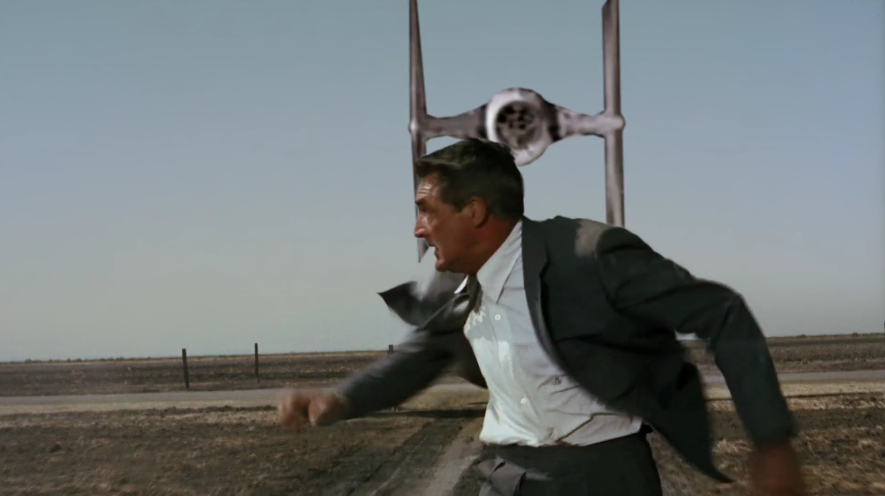 Two of Hollywood’s most iconic film directors have had their work spectacularly moulded into a new short film titled Darth by Darthwest.

The short film, created by director and screenwriter Fabrice Mathieu, is a cinematic mashup of scenes from George Lucas’ Star Wars franchise and Alfred Hitchcock’s classic North by Northwest.

Mathieu used Hitchcock’s seminal aeroplane chase scene as a base for his clever creation, interjecting characters, objects and scenes from numerous Star Wars films along the way.

North by Northwest‘s main protagonist Roger Thornhill (Cary Grant) is dropped in a remote area by a bus.

It becomes clear this is not a standard scene from Hitchcock’s 1959 spy thriller.

The supernatural-looking craters in the landscape are the first clues.

Viewers are treated to cameo appearances by C-3PO, BB-8 and R2-D2.

And at the end, a familiar intergalactic Star Wars spacecraft is on hand to save the day.

That’s very lucky for Thornhill, as Darth Vader’s TIE Fighter is gunning for him with laser cannons.

There are even structures and buildings from the Tatooine landscape expertly transposed onto the similarly arid landscape Hitchcock chose originally for the scene.

The film was released on Vimeo two weeks ago by Mathieu, and has been viewed more than 135,000 times.

Those who watched the short film were quick to gush at its brilliance.

“This is pure epic. Star Wars all the things! And the genius of Hitchcock! #geekery #starwars #hitchcock,” Lerato Mejikfaeri wrote on Twitter.

Martin Gore posted to Facebook: “Travelling through hyperspace may not be like dusting crops, but after watching this I beg to differ!”

The technological wonder of the mashup is in line with the groundbreaking nature of the original films.

Star Wars has long been considered extraordinary for its costumes, set designs and special effects, while North by Northwest was the first film to use kinetic typography in its opening credits, and is constantly lauded for its visual beauty and complexity.

Darth by Darthwest: the mashup you’ve been looking for