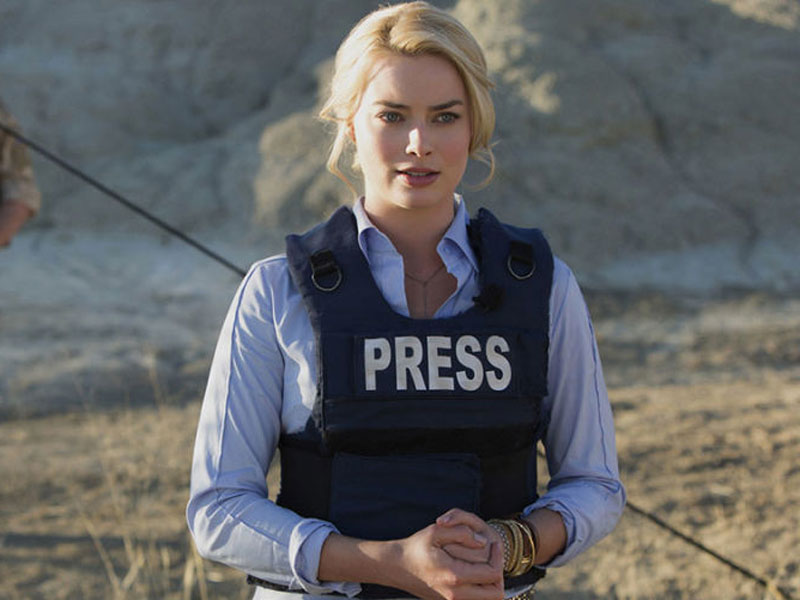 Despite dominating the marketing campaign for Whiskey Tango Foxtrot, and being billed second only to star Tina Fey, Margot Robbie’s presence in the film is unexpectedly minimal.

But with the little she has, Robbie manages to convey more than the film deserves. Her brief screen time is one of the few high points in this otherwise chaotic mayhem of missed opportunity.

Francis Ford Coppola once said that art depends on luck and talent. Glenn Ficarra and John Requa’s wartime dramedy enjoys the privilege of both and still has the audacity to flounder.

There’s a substantial capacity for creation amongst the people involved, including Fey, writer Robert Carlock and producer Lorne Michaels. It’s even based on a popular memoir by war journalist Kim Barker.

And yet, with all that creative force, Whiskey Tango Foxtrot amounts to almost nothing. It’s not funny enough to be a comedy, not insightful or biting enough to be a satire, too naff and heavy-handed to be a drama and simply not entertaining enough to be anything else.

Dissatisfied with her career and her relationship, television journalist Kim Baker (without the ‘r’) agrees to a brief term as a war correspondent in Afghanistan. She doesn’t fit in with the extreme environment initially, but formula and convention dictate that Baker will rise to the occasion before long.

• The tragedy that tainted the new Jungle Book movie
• ‘Too soon’: the risky Boston bombings movie
• Hail, Caesar!: the movie for movie lovers
• Captain America, we’ve been waiting for you

To touch more on plot would belie the lack of it. The action is episodic and disjointed. That can be a powerful artistic tool, such as in Kathryn Bigelow’s 2008 The Hurt Locker, but Whiskey Tango Foxtrot’s episodic nature inhibits it from engaging on any specific front.

The film is narratively, creatively and thematically incoherent. Had the filmmakers pursued any one of the avenues of possibility that they touch on, the film might have been better.

Insight isn’t mandatory in film, but Whiskey Tango Foxtrot establishes itself as a film that will provide some form of comment on journalism or war or the position of women in the Middle East and then offers none.

There’s a decided lack of sharpness to the film – certain events regarding the conflict in Afghanistan or the Muslim culture occur with such a lack of clarity that it’s often not clear exactly what’s going on. That makes it difficult to care.

As someone with a genuine aptitude for humour, pathos and charm, Fey’s performance is curiously lacking. More appealing is Robbie as a fellow reporter, occupying a complicated presence that straddles comic relief and journalistic mania. There’s a hunger in her character that reflects addiction to action.

Joseph Heller’s Catch-22 is the archetypal example of how poignant a union between comedy and tragedy can be. It’s the line that Ficarra and Requa pursue, but it’s a fine line to tread. Whiskey Tango Foxtrot is a callous film – horrific moments are breezed over in the filmmaker’s eagerness to arrive at the next joke.

Fey recently said it was a difficult role because she had no experience with war journalism and because it was filmed in Santa Fe, New Mexico. All of that is reflected in Whiskey Tango Foxtrot. This is a Kabul in which Afghans are played by Italian-Americans.

Towards the conclusion of the film, Baker smiles fondly out the window of a taxi at a boy begging on the streets of Kabul. He scammed her when she first arrived in the city. The intention is that we engage in Baker’s sentimentality.

However, while the boy’s scam was an exciting life experience for Baker, living on the streets in a war-torn, third world country is the boy’s life.