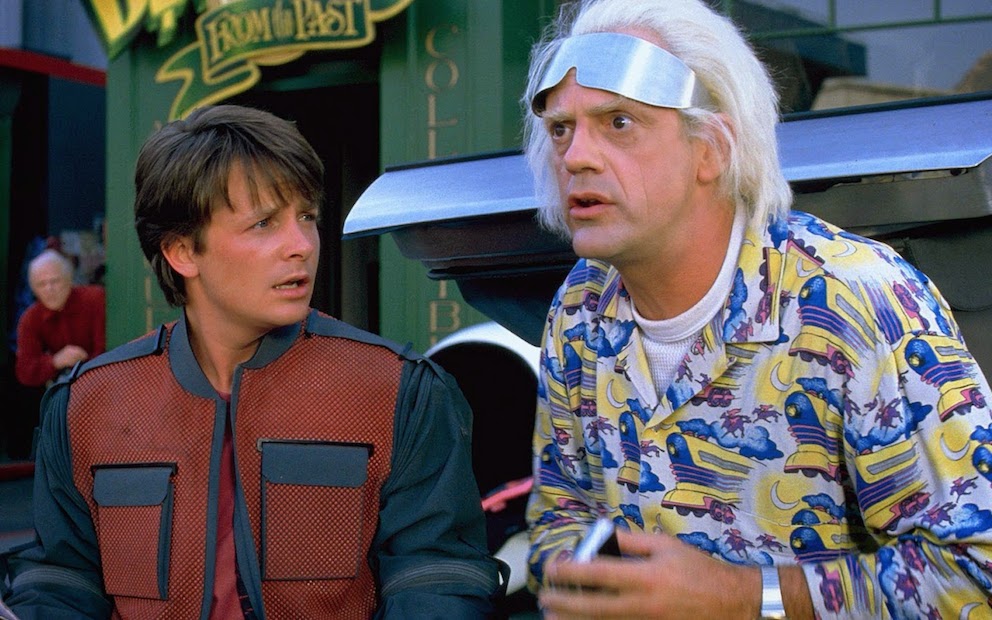 In the 1989 classic Back to the Future II, skateboarding teen Marty McFly and nutty scientist Dr Emmett Brown travel to the future, a heady place where kids zoom about on hoverboards, flying cars are powered by household garbage and shoes tie themselves.

So what did they get right? And what remains tantalisingly out of reach?

In the 2015 of Back to the Future II, little girls scoot around a lake on hovering scooters and teens hell-bent on revenge fly boards with flame exhausts.

In May, Canadian inventor Catalin Alexandru Duru broke a world record flying his propeller-based hoverboard, travelling a distance of 275.9 metres. Alas, probably not quite far enough to get away from Biff Jr and his futuristic henchmen.

“Boy oh boy, Mom, you sure know how to hydrate a pizza.”

While rehydrating a tiny pizza to family size was the vision of 2015 food that Back to the Future II imagined, the reality has been almost the opposite.

The slow food movement has taken hold as a backlash to convenience-driven foods, with a swag of television shows and restaurants popping up that showcase traditional food made by hand.

Like the future depicted in the Jetsons, the 2015 of Back to the Future showed flying cars — and they may not be as far off as you think.

Slovakian company AeroMobil has created a car-aeroplane hybrid that it expects to have available for purchase in the next two or three years. You’ll still need a pilot’s licence to fly one though.

In the movie, future Marty McFly has a video conversation with his bosses via the TV.

These days, we have Skype, FaceTime, Snapchat, Google Hangouts … yeah, it looks like this one definitely came true.

Fax machines in every room

Fax machines? Do people still use those things?

Faxes may have gone the way of the laser disc, but email, SMS and push notifications mean it is pretty hard to escape someone who wants to get in touch with you.

Plus, with wifi-enabled printers, you don’t even need to be plugged in to get something in hard copy. Let’s call this a win for the Back to the Futurists.

The 2015 of Back to the Future II shows the Jaws franchise — huge in the 70s and 80s — continuing its trajectory with the 19th in the series in cinemas.

Happily for beachgoers everywhere, the last Jaws movie was released in 1987, but on the trend of sequels and movie series, the prediction was not far off the mark.

According to AMC Filmsite, 12 of the 15 top grossing movies in the US in the past were part of a series, with two Avengers movies making the list.

Yeah we have a record of sporting results for the past 50 years — it’s called the internet.

Perhaps the coolest prediction of the future made in the movie is Mr Fusion, a system that converts household garbage into fuel for a (flying) car.

Physicist Ben Powell told the ABC a banana peel and a can of beer could probably generate 1.21 gigawatts of power and more besides if broken down using nuclear fusion, but scientists haven’t managed to harness the process yet.

However, biofuels are already in widespread use, and Professor Powell predicts renewable energy sources such as solar, wind and water power could make fossil fuels obsolete within the next few decades.

Back to the Future: what did it get wrong and right?