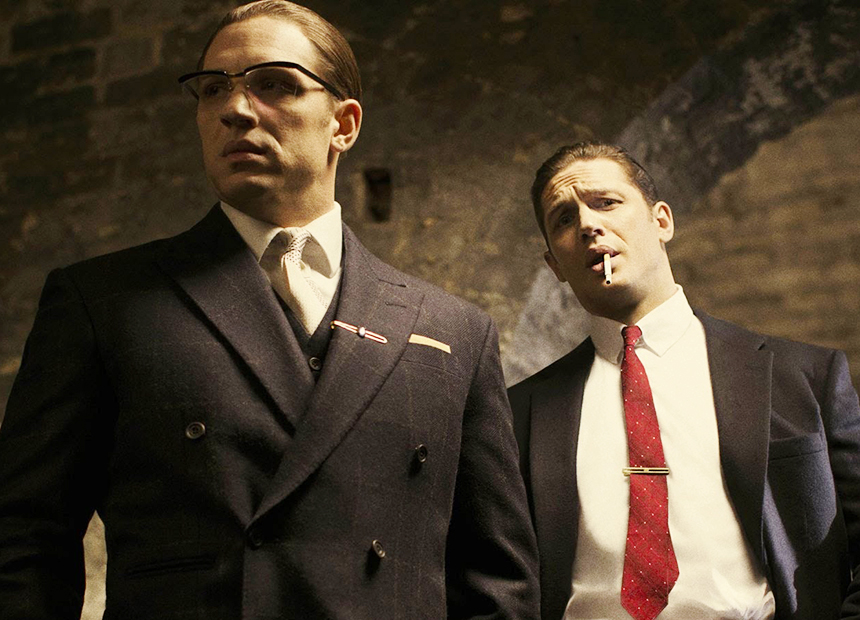 Legend is a flawed gangster film that doubles its dose of Tom Hardy, only to wind up with half a leading man.

The film follows the story of the psychopathic Kray twins, a pair of British gangsters who dominated crime in London’s East End during the 1950s and 1960s. Hardy plays both brothers.

The story of the Krays is an overfamiliar tale in the UK, told and re-told to the point of being trite, which is perhaps why writer-director Brian Helgeland chose to recount so little of it.

For a foreign audience, it reads as the tale of a charming brute who falls in love with a damaged girl, while he and his mentally unhinged twin bash and stab their way across London in a bid for ultimate gangster power.

Unfortunately, there is limited exposition of the characters, little in the way of storyline, and the voiceover narration is poor. This story of identical twin Cockney crime lords goes nowhere, slowly, for almost 2.5 hours.

Its principal weakness is the writing, but what is maddening, for an ardent Hardy fan like myself, is that Legend finally proves beyond doubt that he cannot carry a film on his own.

The fact he plays both lead characters feels like a gimmick, like award-show bait. He fills his cheeks with cotton balls like Marlon Brando in The Godfather, hunches his shoulders, stuffs something up one nostril to simulate a broken nose and adopts a Bane-like croak to become violent gay maniac Ronnie Kray — an utter caricature.

Without the props, in his normal accent, broken teeth and impeccable hair, Hardy as Reggie Kray is essentially himself: a brute in a suit.

Neither character (both of which he has played before, in various forms) is enough to hold the screen. Just like his mumbled lines, Hardy retreats. His performance is muffled, even as he tries to dominate with threats, punches, knife stabs and pistol waving.

He is, as always, the co-star, not the lead. In the recent Mad Max: Fury Road, he is masked, brooding and silent, while Charlize Theron shines. In The Dark Knight Rises, he is masked and muscled — more a shadowy nemesis than a human foe.

In the upcoming The Revenant, he again plays second fiddle, this time as foil to Leonardo DiCaprio, a position he seems doomed to play. He did it before as Eames in the DiCaprio vehicle Inception. Hardy won acclaim as Eames – the role suited him perfectly.

But trying to shoulder the weight of an entire movie, as DiCaprio does time and again, is too much for him. Hardy managed to pull off the feat in Locke, but only because he was the only actor ion the film. With the screen vacated, he has room to shine. Once you bring in everyone else, he shrinks.

This happens in Legend. American mafioso Angelo Bruno (Chazz Palmintieri) dwarfs the Brit in each of their scenes together, both physically and as an actor.

It doesn’t help that Helgeland chose to narrate the film with the female lead Frances Shea (Emily Browning). Her voiceovers squelch the twins and rob Hardy of a chance to assert himself.

Frances’ monologues sound like they were written by first-year film students, complete with high school metaphors. ‘Did you think that because I’m the narrator I couldn’t die?’, she asks the audience in one, breaking the fourth wall for tacky effect. In another, she compares life to a British cup of tea, as if Englishness was itself a plot device. Cringe.

Because of her narration, Reggie and Ronnie Kray have no voice. Because of Helgeland’s script, they have no origin story, little actual conflict and no resolution. The emptiness of the film’s name reflects the plot. It just as well could have been called ‘Fable’ or ‘Tale’ or ‘Saga’, and been as boring still.

But it is Hardy’s self-cancellation that is most disappointing. Neither of his twin characters can be loved, hated or sympathised with, and for that Hardy shares a lot of the blame.

I regret to say, Tom Hardy will always be Bane, never Batman. Why Tom Hardy will never be a leading man