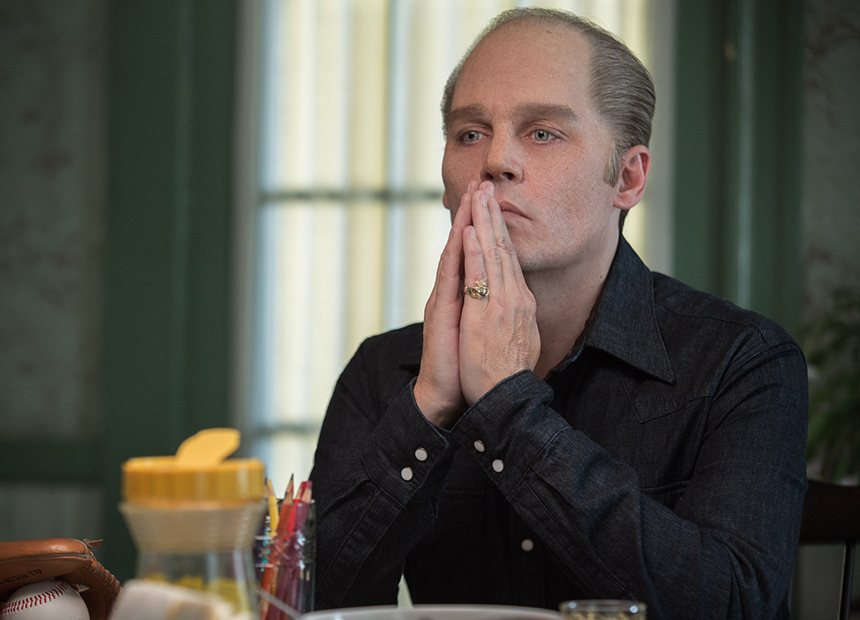 It’s been a long time since Depp has been as good as he was in Donnie Brasco, Edward Scissorhands or A Nightmare on Elm Street.

So thank God he made Black Mass. It could very well earn Depp his first Oscar.

While Dark Shadows (2012) was serviceable and The Rum Diary (2011) passable – the portrayal of this charismatic and near psychopathic Irish-American gangster is a role he seems born to play.

As Bulger, Depp is heavily made up with a faux bald head, pallid skin and pale blue eyes.

However, you get the sense this impressive physical transformation is only the cherry on top of Depp’s performance as he morphs body, mind and spirit into the sickening character.

Bulger was boss of one of Boston’s most notorious and feared groups “The Winter Hill Gang”.

In almost every scene Depp makes you chuckle, grin or smile, but just as quickly moves you to disgust or fear.

He is so commanding that he controls the movie, pulling the audience and their emotions along with every morbid action.

• The Intern: has Robert De Niro lost his way?
• The Martian might just be the perfect movie
• How two Aussie kids saved this Hollywood shocker

Bulger adores south Boston, is proud of his Irish heritage and controls the zone with a firm yet passionate hand.

Those who live in the area love him but he’s never above punishing people to maintain his power.

Depp walks the fine line between sweet and sour with ease and is just as adept at hugging the neighbourhood grandmothers as he is suffocating people to death.

The role gives him a real shot at his first Best Actor Academy Award.

Set in the late 1970s and early ’80s, the movie picks up the story of “The Winter Hill Gang” amid a deadly turf war with rival Italian Boston family, the Angiulos.

FBI detective John Connolly (Australia’s Joel Edgerton) is sent back to his childhood home in south Boston to clean up gang crime.

However, it’s principally Depp and Edgerton’s performances that dominate the movie.

If the Oscars were held tomorrow, The Hollywood Reporter tips Edgerton to win Best Supporting Actor for his role.

The pair lean on one another to try and achieve their separate goals of monopolising the underworld and defeating crime.

This struggle is made even more complex by the fact the Bulger siblings are childhood friends with Connolly.

Edgerton’s Connolly is initially a highly principled man. He quickly degenerates under the pressure of the manipulative Whitey Bulger.

It is when he is most compromised that Edgerton excels in the role. He clings onto a facade of integrity while becoming increasingly conflicted throughout the film.

There is one scene in particular where Edgerton winks at a press pack wanting to talk to him amid a success in the case.

Everyone watching is aware of how hollow and compromised the victory is in reality.

But all the designer suits, expensive jewellery and fancy dinners in the world can’t hide the body of evidence – not to mention the FBI pressure – that begins to weigh on Connolly.

His choice becomes between one of loyalty to the FBI, or an obligation to his childhood mate, who rules an entire area through violent crime. Why Black Mass is Depp’s best chance for an Oscar